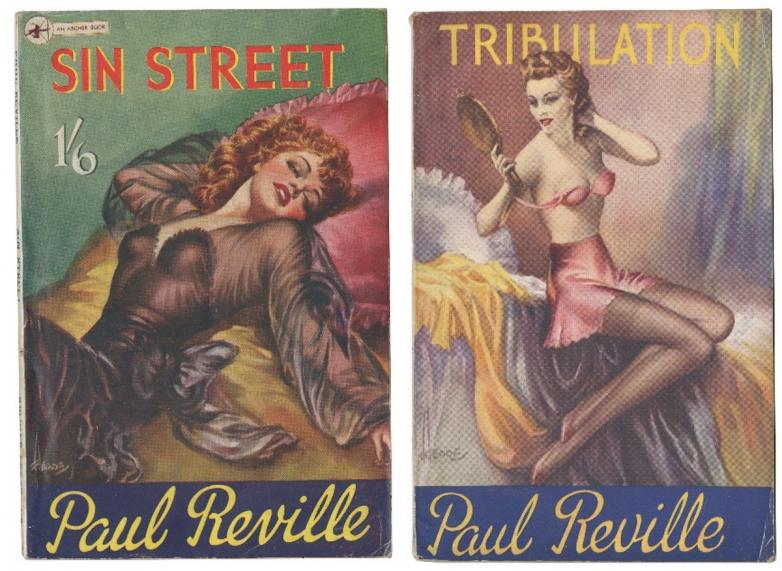 From a selection of pulp fiction with cover art by H.W. Perl and Reginald Heade. Estimate: £400-600

London — To many people the words Pulp Fiction conjure up the 1994 Quentin Tarantino film, regarded not only as the director’s masterpiece but regularly voted by many critics as one of the best movies ever made. The title refers to a style of cheap – they were printed on pulp paper, hence the name – sensationalist but pacy novels with plenty of crime, sex and violence and punchy dialogue, which peaked in popularity in the mid-20th century. Now a huge collection of pulp fiction is to be offered over several lots in Bonhams Fine Books, Manuscripts and Photographs sale in London on Thursday 24 June.

Pulp fiction had mass appeal and was a highly competitive industry, but its authors are now largely forgotten. Some of them disguised their identities under pseudonyms; others didn’t actually exist. ‘Hans Luger’, for example, who was published by the British house Scion, was an entirely invented name and more than 20 writers contributed to his output between 1950-54. The influential British crime writer ‘Ben Sarto’ was another cover name for several contributors and the sale includes an almost complete set of his works. The early Sarto novels were written by Frank Dubrez Fawcett and include She Ruled with a Rod; Miss Otis Comes to Piccadilly and Rebecca of the Snatch. Rebecca is one of several rarities in this collection, with no copies recorded in any library collections. Estimate: £1,000-1,500.

Many of the settings were the mean streets of American cities, although the criminal underworld of Paris was also popular – and there were sub-genres of white slave trading and science fiction, among others. Whatever the setting, however, topics rarely strayed beyond the basics of crime, murder and sex, with women portrayed as either sultry temptresses, street walkers or helpless victims in need of rescue. Titles had to grab attention to differentiate them from the hundreds of others on a book stand and they usually gave a straightforward indication of what was in store. The output of the prolific Michael Storme – the pseudonym of George Herbert Dawson – for instance included Hot Dames on Cold Slabs, Make mine a Virgin, Stella Buys a Shroud and Baby Don’t love Hoodlums, all of which are included in a lot comprising around 100 examples of his work and that of other writers. Estimate: £1,000-1,500.

Pulp fiction’s appeal was enhanced by striking cover artwork – again to attract attention – some of which is now prized more than the contents. In the 1930s and 1940 H. W. Perl and later Reginald Heade carved out niches as the most prolific and distinctive illustrators in the business and a selection of their work is included in the sale. Estimate: £400-600.

Although many of the authors were American there was a flourishing UK pulp fiction industry and one of the lots in the sale features first editions of Lady - Don't Turn Over; No Mortgage on a Coffin, Snow Vogue and Road Floozie by the British writer Darcy Glinto, the pseudonym of Harold Kelly. Lady Turn over and Snow Vogue landed Glinto and the publishers in front of a judge at the Old Bailey in 1942 charged with obscenity. They were found guilty and fined £200 (approximately £10,000 today). Estimate: £1,000-1,500.

Bonhams Books and Manuscripts senior specialist, Luke Batterham, said: “Pulp fiction is very much a phenomenon of its time and many of its themes are mirrored, in more restrained ways, in film noir which flourished in Hollywood in the same era and in the more literary world of Raymond Chandler. In its heyday, pulp fiction catered for a new mass-market readership, providing escapism and thrills at a price most people could afford. The growing popularity of television sounded its death knell but pulp fiction remains a fascinating insight into a particular period and style of mass entertainment.”