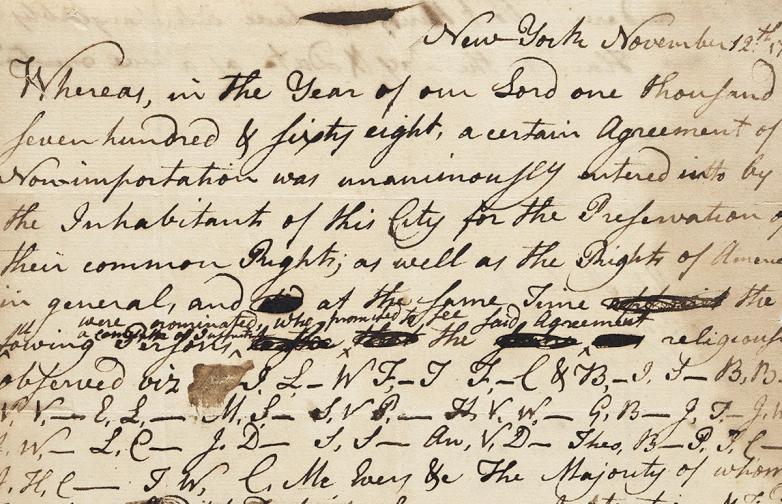 New York — Printed & Manuscript Americana is at Swann Galleries on April 15 with a selection of American historical prints from a private collection, material from the Revolutionary and Civil Wars, religious ephemera and publications, and more.

The sale opens with 121 lots from a noteworthy collection of American historical prints; which encompass the colonial era, the American Revolution, Washington and the “founding fathers,” allegorical prints and the early American engravers, the War of 1812, commerce, and expansion. Highlights include a 1776 engraving of the Late Battle at Charlestown on June 17, 1775, by Bernard Romans ($40,000-60,000); an English edition of A Short Narrative of the Horrid Massacre in Boston, London, 1770 ($12,000-18,000); a 1781 engraving by Joseph Strutt, after Robert Edge Pine, depicting the allegorical figure of America mourning at a monument to four martyred American generals amid the ruins and desolation of war ($7,000-10,000); and Battle of Buena Vista: View of the Battle-Ground and Battle of ‘The Angostura,’ a 1847 chromolithograph by Frances Palmer ($4,000-6,000). 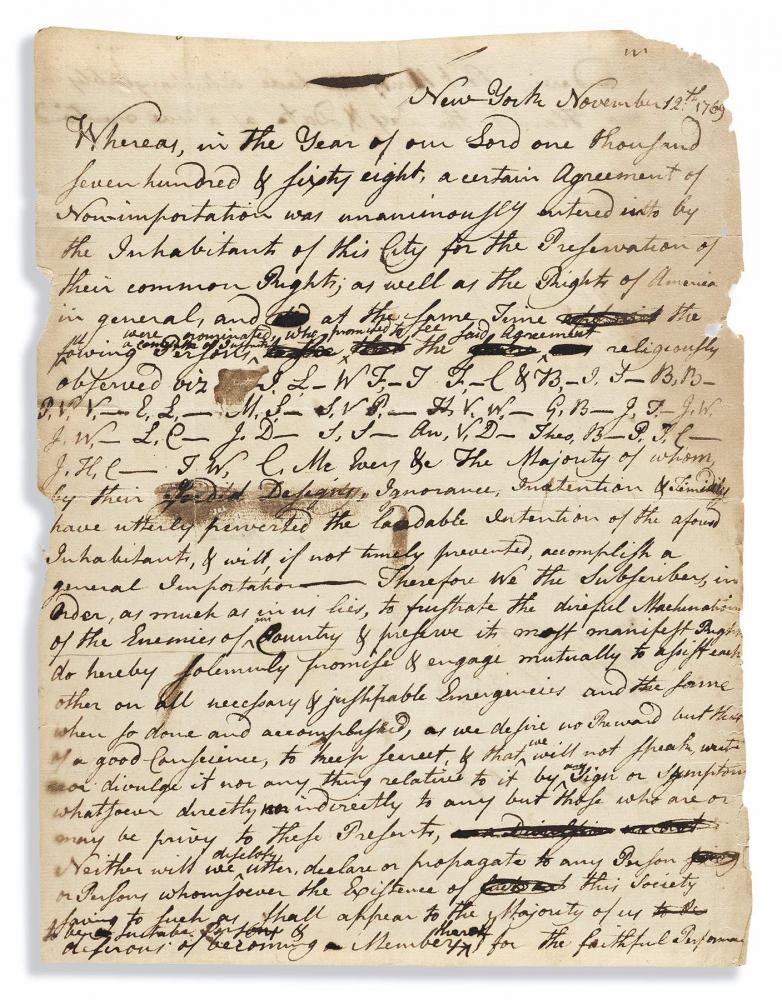 Americana from throughout the Revolution includes a manuscript document to enforce New York’s “Agreement of Non-Importation” during the heyday of the Sons of Liberty in New York, 1769 ($10,000-15,000). Also of note is a 1836 previously unknown printing of the disastrous Treaty of New Echota of December 29, 1835, in which an unauthorized minority faction of the Cherokee Nation agreed upon removal west Indian Territory and cleared the path for the Trail of Tears ($4,000-6,000); a first edition of The Trial of William Wemms. . . for the Murder of Crispus Attucks, Boston, 1770, by reporter John Hodgson ($4,000-6,000); a manuscript account of a French ship’s naval battle with the British off Pensacola covering the events of April 16 to 19 of 1718 ($3,000-4,000); and a list of expenses incurred by Colonel Philip Van Cortlandt at Valley Forge from 1779 ($2,500-3,500).

Items throughout reference major religions, with a significant section of Judaica that features the second book published for a Jewish audience in America, and the first Jewish calendar from 1806 ($3,000-4,000); and a small run of material relating to Mormonism in America, including a first edition of The Book of Mormon, Palmyra, 1830 ($30,000-40,000).

A rich selection that features the earliest publication concerned solely with chocolate from 1631 ($10,000-15,000), early Mexican imprints and manuscript cookbooks, as well as items covering Peru, Guatemala, the Dominican Republic, and elsewhere. An offering of material relative to Native peoples and First Nations in America, including photographs, letters rounds out the sale.

Limited previewing (by appointment only) will be available through April 14, to be scheduled directly with a specialist in advance and conforming to strict safety guidelines. Swann Galleries staff will prepare condition reports and provide additional photographs of material on request. Advance order bids can be placed with a specialist for the sale or on Swann’s website, and phone bidding will be available. Live online bidding platforms will be the Swann Galleries App, Invaluable, and Live Auctioneers. The complete catalogue and bidding information is available at www.swanngalleries.com and on the Swann Galleries App.