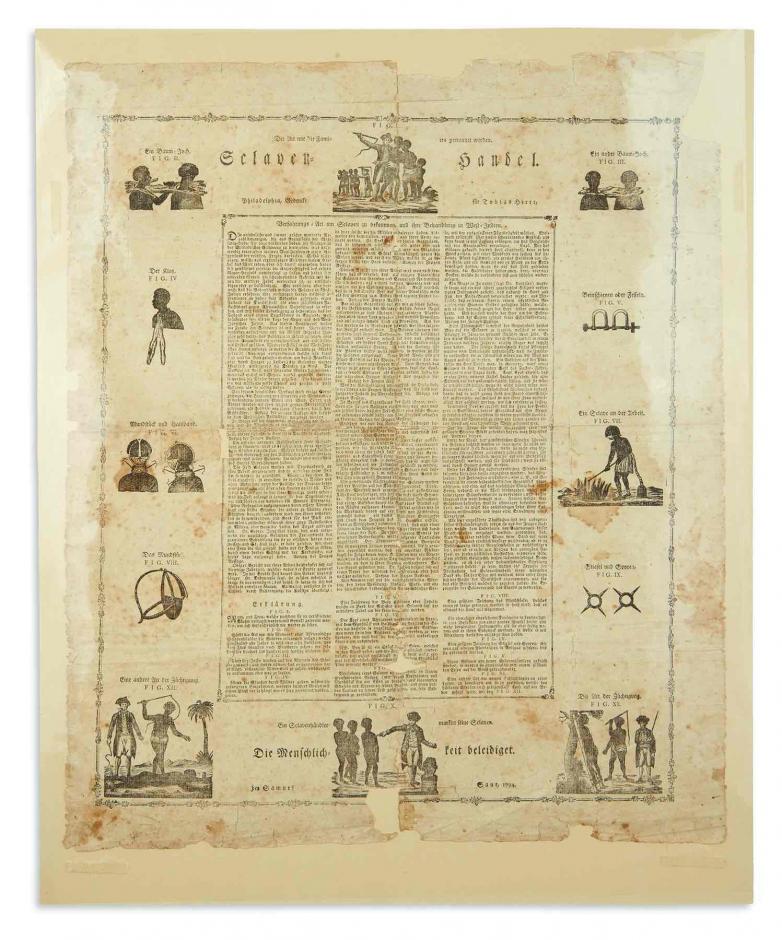 New York — On Thursday, March 26, Swann Galleries will offer a sale of Printed & Manuscript African Americana featuring material from the last three centuries with a strong showing of family papers and archives.

Archives include family papers of the distinguished Ruby-Jackson family of Portland, Maine. The collection includes material from five generations dating from 1853 to 1961, with items from an Underground Railroad conductor, a Tuskegee Airman, as well as a state senator in Reconstruction Texas. The archive is expected to bring $3,000 to $4,000. Further family papers include those of Dora Stephens and her family who were enslaved in the household of Confederate Vice President Alexander Hamilton Stephens in Crawfordsville, Georgia, and who continued working there after abolition. The small archive features 19 items with correspondence and family photographs dating from 1866 to 1907, and is estimated at $25,000 to $35,000.

Further items from the slavery and abolition period feature a rare early illustrated German-American anti-slavery broadside printed in 1794 in Philadelphia by Tobias Harte. Likely the first American effort to disseminate the powerful images that would remain an important part of anti-slavery iconography for decades, it is expected to cross the block at $12,000 to $18,000. A seventh printing of the Proclamation of Emancipation by the President of the United States, printed by an abolitionist publisher in Boston and the only one produced in pamphlet form, carries an estimate of $10,000 to $15,000. A circa–1860s carte-de-visite portrait of important abolitionist Reverend Henry Highland Garnet, whose 1865 sermon on the passage of the 13th Amendment was the first address by an African-American to Congress, is estimated $5,000 to $7,500.

Notable pop-culture figures feature throughout the sale. Highlights include comedian Julius “Nipsey” Russell with a large archive featuring photographs and letters from 1929–2000, most notably is a personal letter from Martin Luther King, Jr., signed by his secretary, thanking him for performing at the culmination of the Selma to Montgomery march ($6,000-9,000); and famed boxer Joe “the Brown Bomber” Louis with a circa 1935–45 collection of photographs, assembled by his manager Julian Black ($2,000-3,000). E. Simms Campbell’s A Night-Club Map of Harlem, featured in the inaugural issue of Manhattan: A Weekly for Wakeful New Yorkers, 1933, present in its original wrappers, points to the epicenter of African-American culture during the Harlem Renaissance ($10,000-15,000).

Letters from artist Romare Bearden to longtime friend and collaborator Harry Henderson are among artist-related items. Dating from 1949–87, the letters offers a rare insight into the vision of an important American artist, estimated at $5,000 to $7,500. Also of note is a poster for an exhibition at the Weusi-Nyumba Ya Sanaa Gallery in Harlem Cookin’ and Smookin’: Where We At, Black Women Artists, 1972, which included works by Faith Ringgold, Ann Tanksley and Dindga McCannon, among others. The poster is expected to bring $600 to $900.

The first issue of the iconic Black Panther newspaper The Black Panther: Black Community News Service, April, 1967, issued just a few months after the party’s creation, makes its market debut here at $1,500 to $2,500. The first issue is available alongside a collection of 44 The Black Panther: Black Community News issues, including the second published in May 1967 which demonstrates the professionalization of the production of the publication ($3,000 to $4,000). Additional material from the Civil Rights era include Ernest Withers I Am A Man, Sanitation Workers Strike, a 1968 silver print ($5,000-7,500); and a 1960 poster printed for a protest at the 1960 Republican Convention where more than 5,000 marchers including Martin Luther King, Jr., A. Philip Randolph and Roy Wilkins demanded a conference with the Republican National Committee and a civil rights plank in the party platform ($4,000-6,000).

Exhibition opening in New York City March 21. The complete catalogue and bidding information is available at www.swanngalleries.com and on the Swann Galleries App.