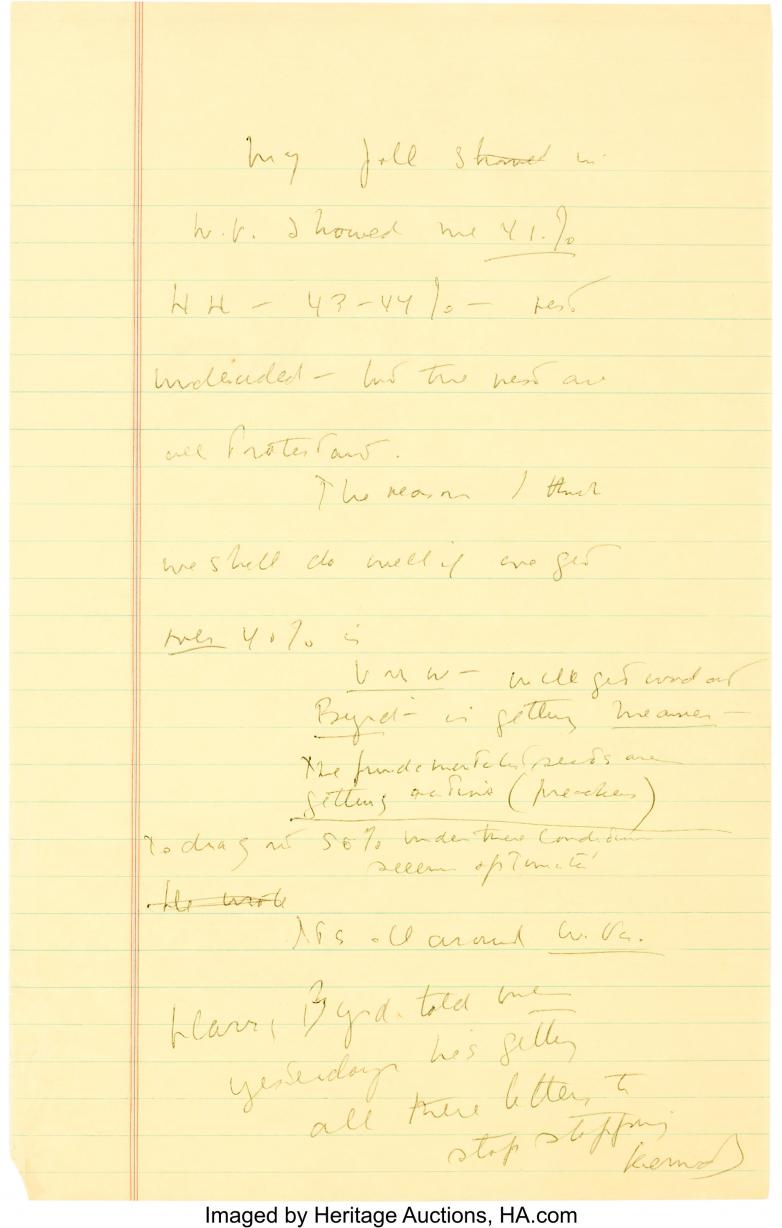 John F. Kennedy's uncensored campaign notes, made while suffering from laryngitis, sold for $25,000.

John F. Kennedy Uncensored Campaign Notes Made While Suffering from Laryngitis is a trove of 78 separate pages that sold for $25,000 to lead the sale. On these handwritten pages, the 35th American president addressed a number of topics, including his philosophies, campaign plans and his frustration with asking and answering questions with his staff. He cited specific events, such as his Sept. 12, 1960 speech to the Greater Houston Ministerial Association at the Rice Hotel, a performance that was important to his campaign and is widely considered one of his best speeches. He also alluded to specific people and reveals thoughts about the campaign, such as in his suggestion that it might be better not publicly debate Minnesota Senator Hubert Humphrey, because of the impact laryngitis had had on his voice, and the fact that Humphrey is "pretty good with a crowd.”

Two dozen bidders pursued an Abraham Lincoln Autograph Letter Signed "A. Lincoln" to drive its final price to $20,000, against a pre-auction estimate of $12,000. The letter, written to Gideon Welles, Secretary of the Navy, Lincoln addresses how to proceed with resignations for those who wish to withdraw their resignation applications.

A John F. Kennedy Typed Letter of Condolence Signed "John Kennedy" more than tripled its pre-auction estimate when it finished at $20,000. The letter is addressed to Mrs. Rudolph Anderson, Jr., whose husband was killed while on an operational flight Oct. 27, 1962, when his U-2 spy plane was shot down while on a reconnaissance mission over Cuba.

Heritage Auctions’ next Historical Manuscripts Auction will be Oct. 21.