Chicago — Potter & Potter Auctions is pleased to announce their Rawlins Magic Collection II Auction to be held on Saturday, June 29th, 2019 starting at 10am at the company's gallery, located at 3759 N. Ravenswood Ave., Chicago, IL 60613. Jim Rawlins was a devoted student of magic and its history who spent nearly three decades building his impressive, important, and diverse collection. All items from this upcoming sale will be on display and available for public preview on Thursday, June 27th and Friday, June 28th from 10:00am to 5:00pm in the Potter & Potter facility. 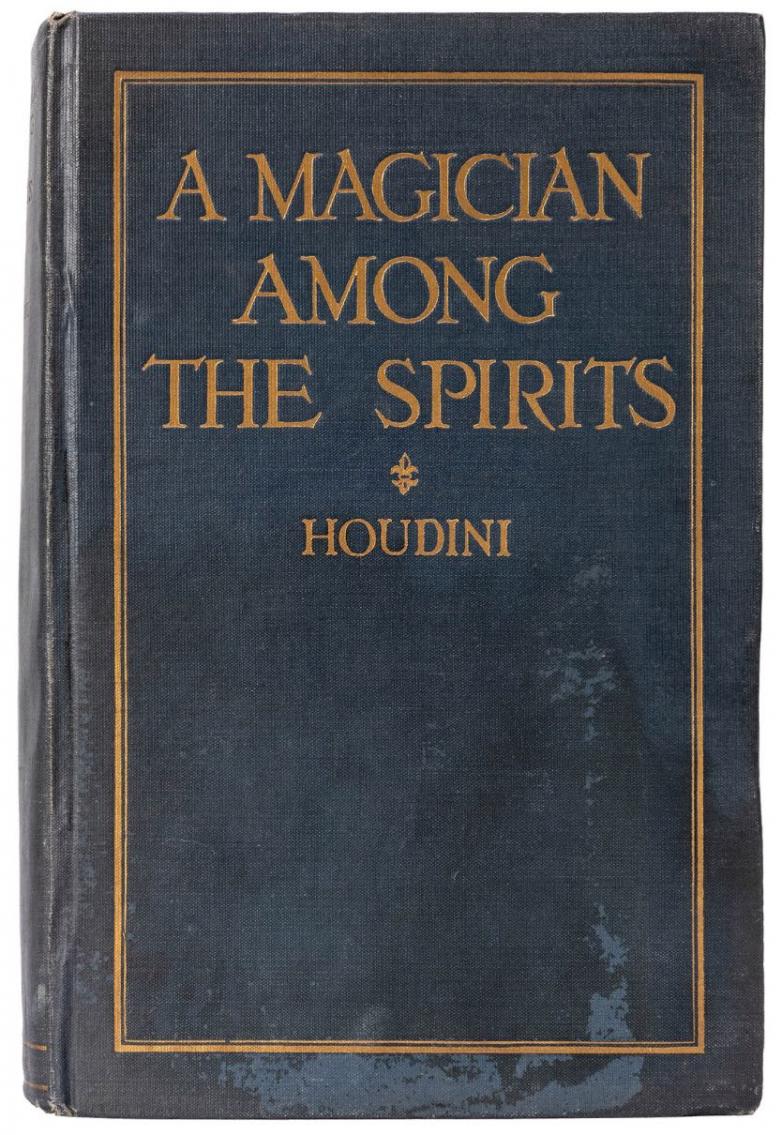 A Magician Among the Spirits, presentation copy signed by Harry Houdini. Estimate $2,000-3,000

Early to mid-20th century magic apparatus are headliners in this can't miss sale, and represent many of the top lots on offer.  Things are looking up with lot #55, a c. 1905 Crystal Coin Ladder made by Martinka & Co. of New York. This rare trick has coins produced by magic dropping down a glass and metal ladder on command, falling into a hat at the bottom of the lowest frame. This handsome illusion is decorated with cast eagles and is estimated at $8,000-12,000. Lot #35, a large c. 1900 cannon ball vase also by Martinka is estimated at $5,000-7,000. This classic conjuring prop enables a hare or other object to vanish from a box, only to reappear in a vase in which, only moments before, was occupied by a cannon ball. The cannon ball vase is arguably one of the finest tricks Martinka offered; this largest size listed for $10 in the company's 1898 catalog. And lot #6, Edgar Bergen’s c. 1939 Flowering Rose Bush, made by Petrie and Lewis of New Haven, CT, is estimated at $5,000-7,000. This illusion features a barren green plant which slowly and elegantly blooms, bearing real flowers which can be cut and handed out to the audience. This lot, owned and used by the most famous ventriloquist of all time, includes its original wooden packing case bearing his address label and name lettered on the lid in black paint.

The automatons and ventriloquism-related props offered through this sale are certain to be the talk of the town. Lot #53, a c. 1900 clown magician musical automaton made in Paris by Leopold Lambert is estimated at $8,000-12,000. This rarity has the magician, nodding his head and sticking out his tongue, waving his wand and conjuring a dove, three baubles, a rabbit, and a die on his table. This breathtaking and impressive automaton measures 25” tall, inclusive of its wooden base. Lot #54, a contemporary musical magician decapitation trick automaton made by Zdenka of Germany is estimated at $2,000-3,000. In this example, a female magician standing in a cabinet beside a vine of roses waves a fan in front of herself. Her head vanishes and reappears in a black die, but a moment later is restored to its original position, as music plays and the crescent moon rotates atop the vine. This working marvel is from the collection of Dr. Robert Albo and includes its C.O.A. and warranty paperwork. And lot #8, Edgar Bergen’s Charlie McCarthy table drape, is estimated at $1,00-1,500. This c. 1950s 84 x 36” black corduroy drape with full provenance is decorated with yellow fringe and a 13" diameter felt patch of Charlie McCarthy.

Elaborate and eye-catching stage worn costumes by some of the 20th century's most famous magicians are well represented in this auction. Lot #119, Doug Henning's Water Fountain Levitation jumpsuit, is estimated at $1,500-2,500. This bright blue, full-body jumpsuit from the 1980s was made by Zazz Designs of Hollywood and is decorated with multi-color embroidery and rhinestones. This lot includes a color reproduction photo of Henning performing this signature levitation act in this jumpsuit. Lot #109, a c. 1930s Asian robe used by magician Jack Gwynne in his vaudeville and nightclub performances, is estimated at $800-1,200. This handsome accessory is trimmed in silk and decorated with hundreds of tiny mirrors, a large embroidered dragon, and floral and bird patterns. This lot includes a 1937 photo, taken by Maurice Seymour, of Gwynne wearing the robe in the prime of his career.  And lot #100, a 19th century silk robe owned and worn by magician Fu Manchu is estimated at $700-900. It is decorated with a multi-color butterfly and floral motif on a pink ground. This lot includes a L.O.A. and a modern print of a vintage photo depicting the magician wearing in the robe, smiling as he performs a card trick. This important costume has been in the collections of David Bamberg, Hugo Puiggari, Martin Pacheco, and Jim Rawlins.

Posters promoting jaw-dropping illusions from times long past offer collectors a front row seat to some of the greatest moments in magic history. Lot #294, a framed 1887 poster advertising Professor Carmelli’s magic show at the Parisian wax museum is estimated at $2,500-3,500.  It was printed by Chaix in Paris and designed by Jules Chéret (French, 1836 – 1932).  Chéret was widely regarded as the father of the modern poster and a master of the Belle Époque style. Lot #291, Harry Blackstone's Oriental Nights poster from 1925 is estimated at $2,000-3,000. Its frenetic imagery features a boy climbing a rope suspended in mid-air, a floating camel, and Blackstone being burned at a stake as imps prod his feet with pitchforks.  And lot #301, a c. 1915 poster spotlighting The Great Jansen, America’s Greatest Transformist, is estimated at $2,000-3,000. This half sheet, 28 ¼ x 21” color lithograph depicts Jansen’s performance of the modern cabinet illusion.

Potter & Potter enjoys a worldwide reputation for consistently offering the rarest and most desirable magic themed books, and this sale is no exception. Lot #334, a first edition, signed presentation copy of Houdini's A Magician Among the Spirits is estimated at $2,000-3,000.  This volume was published by Harper & Bros., New York/London in 1924. It is inscribed “With compliments of Houdini/and best wishes" and includes the bookplate and notation of the recipient, Rossiter Johnson (1840—1931), an American writer and editor of dictionaries, histories, and anthologies. Lot #340, Guy Jarrett's Jarrett Magic and Stage Craft Technical from 1936 is estimated at $1,500-2,000. This first edition publication is inscribed and signed to Chicago magician W.R. “Russ” Walsh, “I don’t see how you are going to get 5 bux worth out of this, you’ve been gipd. Guy Jarrett." Jarrett produced approximately 500 copies of this book on a table-top hand press, writing the text as he set the type, then collating, binding, advertising, and selling the books himself. And lot #341, Harry Kellar's Aids in Arithmetical Calculations, and Professional Tours Around the World from 1885 is estimated at $1,500-2,000. Interestingly, the last seven pages of this book record Kellar’s world tour dates and locations, concluding with his run of performances at Philadelphia’s Egyptian Hall.

This auction's selections of autographs and important ephemera reads like a who's who of popular 20th century performers. Two Houdini lots take center stage here. The first, lot #396, is a signed invitation to Houdini’s underwater “Buried Alive” test at the Hotel Shelton swimming pool on August 5, 1926. This invitation is addressed to the Baltimore Evening Sun newspaper and offered the opportunity to witness the escape artist “remain submerged one hour in an airtight metal coffin.” Admission to this event was by invitation only, and the guest list included primarily journalists, medical personnel, assistants, and friends of the magician. The second, lot #397, is a signed Houdini Picture Corporation stock certificate dated January 11, 1922.  Houdini starred in five silent films between 1918 and 1923. After appearing in the first three, the magician founded his own motion picture company, and went on to produce and star in two more. These extraordinary Houdini lots are estimated at $2,000-3,000 each. Also of note here is lot #362, an Edgar Bergen signed and inscribed photograph from the 1930s. Estimated at $200-300, this image features an iconic profile portrait of Bergen with Charlie McCarthy and is inscribed, “To Leonard/may we soon hear of your name mentioned with the theatre and I hope I shall have the pleasure of meeting you soon/Every good wish/Edgar Bergen.”

This sale rounds out with museum-quality offerings of magic-themed decorative arts and robust selections of magicana that defy conventional categories. Lot #286, a large, fine porcelain cups and balls conjuring sculpture by Toni Moretto (Italian, 1929-2011) is estimated at $1,500-2,500.  Lot #364, a c. 1971, highly detailed, painted plaster life mask of Edgar Bergen is estimated at $800-1,200. Lot #443, an Orson Welles Honorary Magicians Dinner napkin from 1942 - signed by 24 noted performers of the era - is projected to change hands in the $2,000-3,000 range. And its game, set, match with lot #391, a wooden Alexander Herrmann Cigar Box, estimated at $2,500-3,500. This c. 1901 rarity is decorated an image of Alexander Herrmann, the most famous magician of his generation, dressed in a bright red costume as a combination jester/devil.

According to Gabe Fajuri, President at Potter & Potter Auctions, "This second sale from Jim's collection demonstrates not only the depth of what he gathered, but the historical significance of the collection, too. I find it particularly appealing that our cover lot, the P&L Rosebush owned and used by Edgar Bergen is a four-way cross collectible of sorts: it was used by a celebrity; it's an unusual, and scarce magic trick; it has all the hallmarks of automatons due to the mechanical nature of the object and the way it works; and it was used by a great ventriloquist."