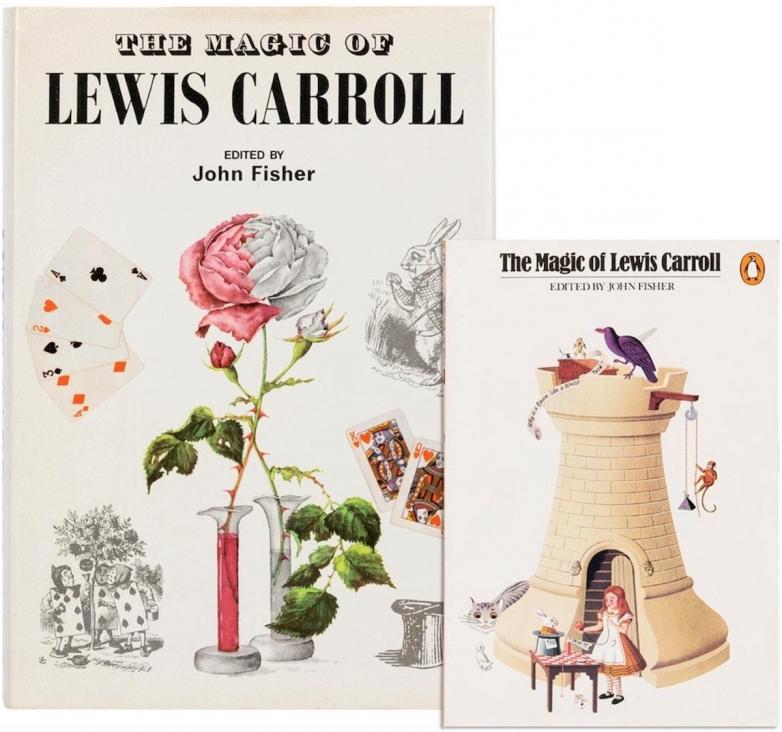 Two signed editions of John Fisher's The Magic of Lewis Carroll sold for $1,560.

Apparatus from the midcentury onward took several of the top slots in this signature sale.
•    Lot #253, a 1960s-era Ken Brooke Master Chop Cup, was estimated at $3,000-5,000 and delivered $19,200. This spun aluminum example was owned and used by British magician and TV personality Paul Daniels (1938-2016) for years. At its peak, his BBC program “The Paul Daniels Magic Show” was viewed by some 18-million people – approximately one third of the entire population of Britain.
•    Lot #363, a German made Coins to Glass illusion from the 1950s, was estimated at $200-300 and scored $1,560. With this trick, four coins audibly appeared in a shot glass sitting underneath an overturned pint glass.
•    Lot #212, a 1990s-era Die Vanishing Casket by Rüdiger Deutsch, was estimated at $700-900 and rolled to $4,080.  Here, a wooden die was placed in a box with an open front and back. Moments later it vanished, allowing a clear view through the box from both sides.

Fine examples of antique apparatus also made this sale's highlight reel.
•    Lot #262, a 1920s-era animated skull made in Vienna by S. Klingl, made $6,600. This prop consisted of a genuine human skull mounted on a wooden platform and isolated under a glass dome. It nodded to answer “yes,” or shook back and forth to answer “no” when questions were posed by the magician or audience.
•    Lot #401, a turn of last century Magic Laundry prop made in Germany by Carl Willmann, was estimated at $3,000-5,000 and realized $7,800. This trick consisted of an iron and wash basin set to accomplish a magical washing routine with a borrowed handkerchief. These props were used on stage by Rüdiger Deutsch in his Bellachini XIII act.
•    Lot #445, a Wine and Water Change made in Hamburg by Call Willmann around 1910, was estimated at $2,000-3,000 and traded hands at $16,800. Here, wine and water were poured into a decanter atop a spun metal stand. The liquid vanished from the decanter, only to reappear – separated again - in two glasses that previously held them.

Outstanding magic related ephemera and archival materials also caught the eyes - and pocketbooks - of bidders worldwide.
•    Lot #24, an original Astarte Throw-Out Card from the late 1800's, was estimated at $500-1,000 and sold for $4,320. It featured a bust portrait of the woman considered the “perfect” magician’s assistant who became Suee Seen in the Chung Ling Soo show.
•    Lot #82, a typed signed letter from Harry Houdini to his friend and fellow magician John Mulholland from March 18, 1924, was estimated at $1,500-2,500 and made $6,600. It was signed “Houdini” and had an inked note below the autograph in Houdini’s hand.
•    Lot #123, a c. 1920 sepia toned portrait photograph of magician Max Malini, was estimated at $1,500-2,500 and scored $7,800. This signed example featured the magician in a coat and tie and wearing a jeweled-encrusted necklace bearing his name.
•    Lot #53, a large archive of Robert Harbin ephemera and correspondence, realized $12,000. This collection was gathered over the course of decades and included letters, personal and professional correspondence, signed book agreements, scripts, manuscripts, explanations of his tricks, publicity materials, and much more.

Fine magicana books were also best sellers at this auction event.
•    Lot #463, two signed editions of John Fisher's The Magic of Lewis Carroll, was estimated at $100-200 and turned the page at $1,560. These included the first edition (1970), and a later paper edition (1973), together with a proof of Fisher’s Further Magic of Lewis Carroll, bearing his notes, and other writings on Carroll and his connection to magic by other authors.
•    Lot #485, a first edition of Howard Thurston's My Life of Magic, was estimated at $250-350 and sold for $1,440. It was printed in Philadelphia by Dorrance and Company in 1929, and was inscribed and signed by Thurston on the flyleaf.
•    Lot #486, a first edition of Paul Vigil's The Doors of Deception from 2017 was estimated at $400-800 and closed at $4,080. It was published in Las Vegas through the Dark Arts Press, and accompanied by a box filled with props used to accomplish the book's effects.

Breathtaking posters promoting legacy 20th century performers rounded out this spectacular sale.
•    Lot #206, a Thurston. World’s Greatest Magician linen backed poster, more than doubled its low estimate to make $10,200. This color litho from 1909 pictured Kellar's successor performing a rapid transposition illusion with the assistance of imps and gnomes, the scenes on either side of his portrait captioned “beginning of trick” and “end of trick” to show the action as seen on stage.
•    Lot #183, a c. 1912 Houdini broadside, was estimated at $500-1,000 and delivered $5,040. Printed in New York by the Metropolitan Printing Co., this green and red letterpress theater poster advertised Houdini’s appearance at the Orpheum in Harrisburg, Pennsylvania.

According to Gabe Fajuri, President at Potter & Potter Auctions, "Interest in magic memorabilia and apparatus continues to be strong - perhaps even astonishingly so. Our first two magic auctions this year both boasted 100% sell-through rates, and this one nearly hit the same mark. But more importantly, we saw strong participation across all categories in the genre, and in the end, the auction topped the high estimate. I'd call that a smashing success by any measure."