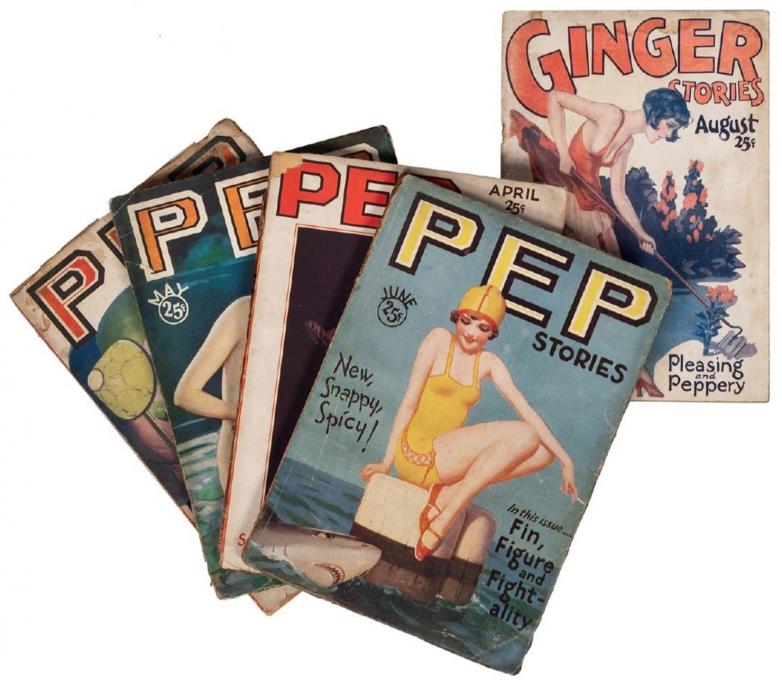 Fine selections of pop culture ephemera also left a lasting impression on bidders. Lot #658, A "Yellow Submarine" production pencil drawing signed by all four members of the Beatles reached its crescendo at $7,800. Lot #721, a collection of seven 1939 World’s Fair pornographic Tijuana bible booklets was estimated at $50-100 and made $330.  They were illustrated by Wesley Morse, an American artist best known as the creator of ‘Bazooka Joe’ for Topps’ chewing gum as well as the creator of the Copa Girl which is still the logo for the New York City nightclub Copacabana. And lot #524, five pulp issues of PEP/Ginger Stories - published in Wilmington, Delaware by King Publishing from 1929-1932 - sold for $300 on their $50-100 preauction estimate.

Entertainment posters and works of art framed this sale in the best possible way. Lot #49, a matted and signed Stan Lee print of Peter Parker turning into Spider-man was estimated at $50-100 and sold for $270. All eyes were on lot #66, a Jimi Hendrix “Flying Eyeball” Concert Poster from 1968. This example, one of the most desirable images from the ‘60s psychedelic era of Rock & Roll, sold for $1,020 -  over five times its low estimate. And collectors went ape over lot #102, a three sheet color lithograph for King of Jungleland from 1949. Estimated at $50-100, this poster, featuring a gorilla and Clyde Beatty AKA the “World’s Greatest Animal Trainer," made $360.

Potter & Potter's midsummer Pop Culture event closed the loop with exciting selections of archives, scripts, cels, mascots, and other items that defied, or transcended, collecting categories. Lot #220, two signed Jerry Mahoney character hand puppets from 1966 sold for $270 on their $50-100 estimate. Lot #680, a Paul Reed Smith “Corazon” SE Santana solid body electric guitar, signed by Carlos Santana, hit its high note at $2,400.  And lot #969, a library of astronaut signed books and photographs from the 1960s/2010s shot the moon at $5,040. This extraordinary archive included signatures of all twelve astronauts who have walked on the moon, the first American woman in space, the first African-American woman in space, and other notable astronauts, as well as an official NASA photograph taken and signed by Neil Armstrong showing Buzz Aldrin descending the ladder of the Apollo 11 Lunar Module on July 20, 1969.

According to Tom Miano, Director of the Toys and Pop Culture Department at Potter & Potter Auctions, "This was my first opportunity to work with the Potter & Potter crew, and they overdelivered on every level. Every person is smart, dedicated, and absolutely team focused. They made this sure that every aspect of this huge sale's preparation and execution was seamless. I am proud of many of the prices we achieved for our consignors, with strong bidding across so many categories. We are already accepting quality items for our Spring 2020 sale. Please contact me right away if you are considering selling one fine item or even an entire collection - this sale is certain to fill up quickly!"