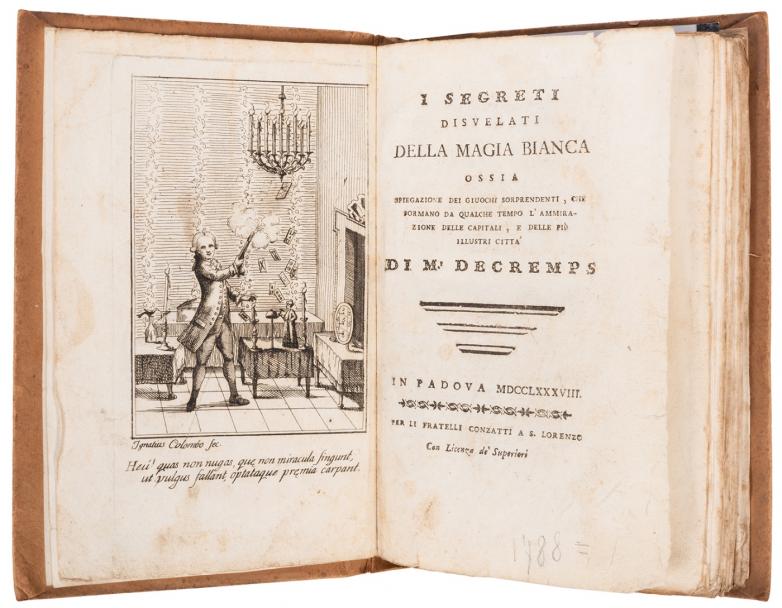 A number of extraordinary, centuries-old conjuring books from the collection of magician Giovanni Pasqua were best sellers at this event. Lot #27, a 1788 copy of Henri Decremps' I Segreti Disvelati Della Magia Bianca / Cinque Sessioni Oltre un Trattato Della Bacchetta Magica, was estimated at $600-900 and realized $3,360 - more than five times its low estimate. Lot #40, a 1761 copy of De’ Giuochi Aritmetici Trattato di N.N. al Nob. Signor Leonardo Rizzoni, was estimated at $300-500 and made $2,640. This book -- one of three copies known -- featured mathematical games, some involving demonstrations with playing cards. And lot #43, a fourteen volume collection of Dizionario delle Ricreazioni di Scienze Fisiche e Matematiche from the 1806/08 timeframe was estimated at $150-250 and delivered $960. This lot included an additional fourteen miscellaneous 20th-century Italian volumes on math, puzzles, and games and 18 issues of the magazine Per Gioco.

Rare 20th-century magic themed publications also caught the eye of buyers at this signature sale. Lot #112, a first edition of Guy Jarrett's Jarrett Magic and Stage Craft Technical from 1936 was estimated at $1,000-1,500 and landed at $3,600. Jarrett produced approximately 500 copies of this book on a table-top hand press, writing the text as he set the type, then collating, binding, advertising, and selling the books himself. And lot #111, Edgar Heyl's A Survey of Conjuring Books from 1997 made $1,560 on its $150-250 presale estimate. This collector's treasure was number 4 of 5 copies, printed by permission of Heyl’s estate, and bound in quarter leather over marbled boards.

Books, photos, apparatus, and ephemera related to legendary magician Harry Houdini continue to captivate collectors worldwide. Lot #162, the Houdini-Slade-Weiss locked book, as profiled in A Magician Among the Spirits, traded hands at $12,000. This book was used in the trial to expose Henry Slade, a supposed spirit medium, by Remigius Weiss. This historically important volume was accompanied by a handsomely framed collage of Houdini memorabilia. Lot #159, a real photo postcard of Harry and Bess Houdini from 1903 was estimated at $800-1,200 and delivered $3,120. This image was taken during the years of their earliest successes, and used as a Christmas and New Year’s greeting. And lot #175, three annotated and wire service stamped news photos of Houdini’s underwater coffin stunt at New York’s Shelton Hotel rose to $720 on its $150-250 presale estimate.

Ephemera, antiques, new and vintage apparatus, and merchandise that defied conventional categories brought this well curated magic sale full circle.  Lot #315, a c. 2004 appearing magic kettle from John Gaughan, was estimated at $2,500-3,500 and served up $5,280. This illusion -- one of six examples manufactured by Gaughan -- enabled a magician to produce a tea kettle from an empty foulard, and then to pour any drink called for from it. Lot #119, a complete run of Jay’s Journal of Anomalies by Ricky Jay and W. & V. Dailey from 1994/2000 realized $1,560 on its $300-500 presale estimate. These specialty publications were letterpress printed on heavy Rives paper and featured tipped-in color illustrations and text illustrations. And lot #231, the manuscript and artwork for Tom Palmer's unpublished The Book of Illusion was estimated at $500-750 and turned the page at $2,400. This c. 1970 archive was housed in its original suitcase. It included approximately 100 loose sheets of cardstock, each hand-lettered and illustrated by Tom Palmer, describing the effect and method behind classic stage illusions. According to our catalogers, "This volume, apparently unpublished, is essentially an oversized and camera-ready project that was never completed. The quality of the artwork and hand-lettering is a testament to the author’s considerable artistic abilities."

According to Gabe Fajuri, President at Potter & Potter Auctions, "We were thrilled with the results of the sale, and especially the prices the books and ephemera in Roxy's collection achieved. Considering the narrow market for Italian works on conjuring, the final tally was impressive. What's more, competitive bidding throughout the auction led to a strong sale all the way around, and even a few records or near-record prices."