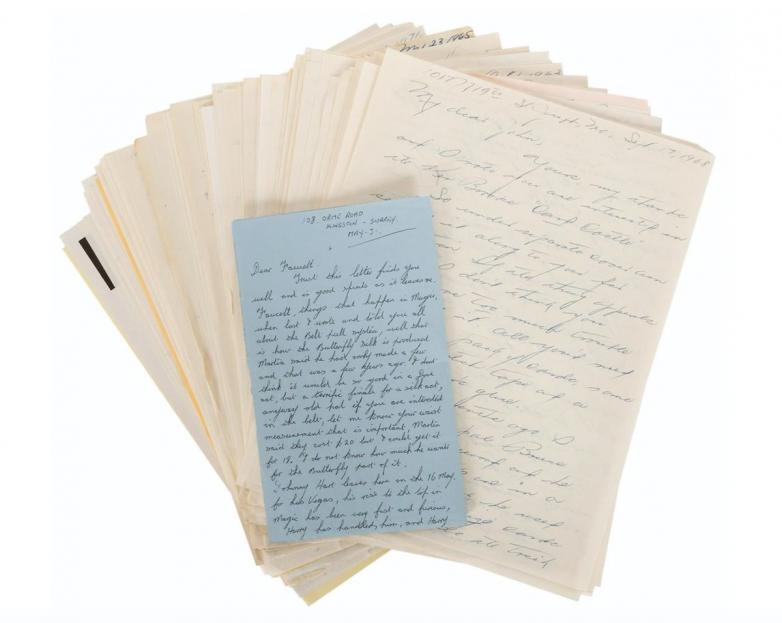 An archive of letters from magician Faucett Ross realized $4,560.

Chicago — Potter and Potter's midsummer magic sale - the fourth and concluding sale of the vast magic collection of Jim Rawlins - proved good things come to those who wait! After a long day of spirited bidding, 78 lots realized between $750-2,000; 20 lots realized between $2,001-5,000; and 6 lots broke the $5,001 mark. Prices noted include the company's 20% buyer's premium.

Magic apparatus from highly respected prewar manufacturers took several of the top slots in this exciting sale.
o    Lot #188, a working aluminum spirit lock, made $9,600 on its $5,000-10,000 estimate. This entirely mechanical prop was made by engineering expert Jon Martin in the 1940s and is one of a handful exant.
o    Lot #56, a giant card wheel from c. 1940, traded hands at $7,200. This provenanced and oversized apparatus, believed to be a unique example, was a feature of magician Chuck Vance’s shows for decades.
o    Lot #152, a Victorian nest of boxes, realized $4,800 on its $2,000-4,000 estimate. This set of six wooden boxes was produced by Hamley’s Grand Magical Saloons in the 1880s and is one of a handful of surviving props marked with the Hamley’s tag.
o    Lot #4, a c. 1900 color changing ball vase sold for $1,440, over seven times its low estimate. This lidded, turned wooden vase changed the color of the solid ball inside from black to white and back again, or caused the white ball to vanish.
o    Lot #309, a camouflaged tabletop servante made by F.G. Thayer in the 1940s, was estimated at $100-200 and landed at $1,320. This device, disguised as a patterned handkerchief, was draped over the edge of the magician’s table to ditch, switch, or secure items.

Postwar magic apparatus also delivered impressive results.
o    Lot #281, a c. 1955 nest of boxes made by Carl Owen, realized $9,000 on its $1,500-2,500 estimate.  This set of seven wood chests was fitted with brass hardware and was only one of two seven-box sets constructed by Owen.
o    Lot #23, Harry Blackstone Sr.’s Vanishing Birdcage used at the Pasadena Civic Auditorium's 1960 It's Magic show, delivered $4,800 on its $1,500-2,500 estimate. Blackstone shared the stage with Billy McComb and five other acts at this event; at the conclusion of the performance, he presented this cage to McComb, whose handwriting on the cardboard tube containing the cage indicates its provenance.

Fully provenanced Harry Houdini used props and apparatus continue to attract the imagination, attention, and wallets of enthusiasts worldwide.
o    Lot #384, Houdini’s large wooden wagon wheel, came full circle at $5,040. This was possibly the last escape device to come out of Houdini’s historic home in NYC.
o    Lot #423, a set of handcuffs from the Houdini-Dunninger Collection, made $5,040.These Cummings handcuffs were patented in 1899 and were accompanied by two keys.
o    Lot #424, an early 20th century German bell padlock from the Houdini-Wresch Collection, sold for $4,080. This lot included a key which made a dinging sound when turned in the lock.

This memorable sales event came full circle with collections, albums, unexpected ephemera, fine antiques, and other top-tier magicana.
o    Lot #433,  an engraved bookplate bearing a bust portrait of Houdini, sold with a trimmed and mounted Houdini Hippodrome Vanishing Elephant advertisement, was estimated at $50-100 and turned the page at $360.
o    Lot #166, an archive of 90+ letters from magician Faucett Ross (American, 1900-1987) from the 1960s – 80s, was estimated at $1,500-2,500 and sold for $4,560. These were written to fellow magician John Bowery and included lengthy discussions of magic methods and the passing scene of the day, among other topics.
o    Lot #421, a leather-bound autograph album filled with magician's signatures - including Houdini, and Chung Ling Soo - was estimated at $2,500-3,500 and made $5,040. These were principally obtained at theatrical venues of the 1900s-10s, mostly in Glasgow, Scotland and Bath, England.

According to Gabe Fajuri, President at Potter & Potter Auctions: "This, the fourth sale from my friend Jim Rawlins' collection, was a resounding success. I'm thrilled with the results of all four auctions, which brought in over $1.25 million in all. Never in a million years did I think that - some twenty-five years ago, when I first met Jim - that I would be the one to handle the sale of his treasures. Built up over decades of steady, considerate, and careful collecting, Jim amassed a truly great gathering of rare, historically significant, and finely made magic props, posters, books, and ephemera. As the introduction he wrote to the final of our auction catalogs, hopefully some of the joy of ownership goes along for the ride with each of the objects offered in these auctions."