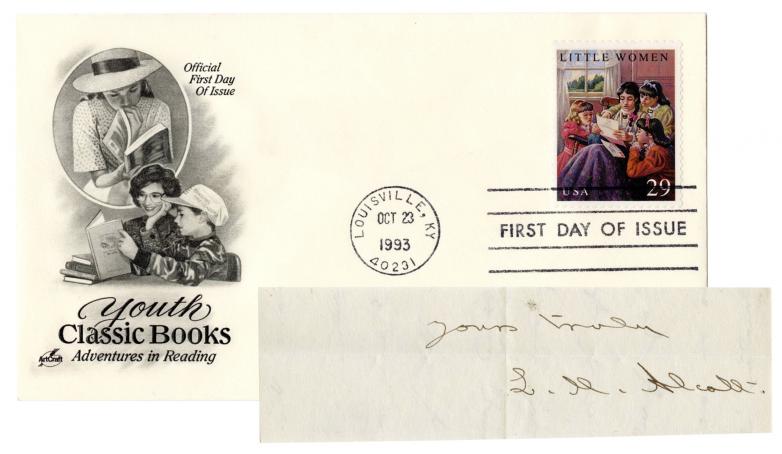 Louisa May Alcott's signature clipped from a letter is estimated at $100-200.

Chicago — Potter & Potter Auctions is pleased to announce this nearly 1,000 lot sale to be held on Saturday, June 20, 2020 starting at 9am CDT. Given current public health regulations, the event will be held entirely online and live streamed from the company's gallery. All bidding will take place through the company's website at www.potterauctions.com. Phone and absentee bids are also welcome. All items are available for in-person preview now, by appointment only.

A full range of vintage to modern coin-op machines take several of the top slots in this comprehensive sale.
•    Lot #355, a Mills 5 Cent slot machine in the likeness of Ulysses S. Grant is estimated at $2,000-3,000. Its astonishingly realistic 72" tall figure is bearded, wears a black hat, and carries a sword much like his namesake; the machine's coin-shaped platform is signed by Dick DeLong & Son.
•    Lot #361, a c. 1930s-era Watling Rol-A-Top 5 Cent twin jackpot slot machine is estimated at $2,000-3,000. This eye-catching and rare tabletop example measures 26 x 15 ½ x 15” and is detailed with a castle and checkered coat of arms on a yellow background.
•    Lot #364, a Mills 5 Cent “Melon Bell” tabletop slot machine is estimated at $1,000-1,500. True to its name, this unusual machine measures 26 x 16 x 15” and is decorated with several images of half watermelons filled with gold coins.

Music themed collectibles - including guitars, musical notations, and promotional materials - also are high notes in this auction.
•    Lot #600, an archive of c. 200 pieces of jazz, blues, ragtime, and African American sheet music from the 1900s-50s timeframe is estimated at $1,000-1,500. This fine collection features subjects, songwriters, and composers including Scott Joplin, Billie Holiday, Louis Armstrong, Lena Horne, Duke Ellington, Nat King Cole, and numerous others.
•    Lot #629, a Fender Precision bass guitar from 1974 is estimated at $800-1,200. This instrument includes its original case and features a three -color sunburst, split pickup, a bolt on maple neck, and a maple fingerboard.
•    Lot #650, a Tommy Metropolitan Opera House poster from 1970 is estimated at $200-300.  This 26 x 20"  unmounted broadside was created to advertise the final performance of The Who’s Tommy rock opera tour.

It's all fun and games when it comes to this sale's premier offering of sports related merchandise, including a fine grouping of antique equipment and souvenirs.
•    Lot #584, a c. 1850s or possibly 1840s Lemon Peel baseball is estimated at $800-1,200. This rarity is covered with a single piece of leather tied off with four distinct lines, not connecting on the backside. Its circumference measures 7 ½”; today's standard ball measures 10 ¼” all around.
•    Lot #547, a signed 1935 World Series mini baseball bat is estimated at $400-600. It bears the signatures of Bill Rogell, Flea Clifton, Charlie Gehringer, Elden Auker, and Ray Hayworth and includes its original gilt printed sticker reading: 1935/Tigers vs. Cubs/World Series.
•    Lot #585, a collection of antique to midcentury baseball apparatus is estimated at $300-500. The equipment includes three catcher’s gloves (Spalding, Reach, and a Wilson Rube Walker); four infielder gloves; two balls; and two metal wire and leather masks.

This auction offers a full range of quality toys, games, and items originally designed as children's playthings, including an important collection of sample and prototype Steiff brand plush.
•    Lot #13, a Steiff Peter Rabbit pre-production sample of the company's 1904 replica is estimated at $80-125. This 9 ½” tall prototype, wearing a topcoat and slippers, retains its button in ear and "not for sale" ear tag as its Steiff IDs.
•    Lot #49, an unproduced and unmarked 15" fully jointed white mohair Teddy Bear from the Steiff studios is estimated at $200-300. He comes to life with black pupil eyes, brown hand embroidered claws and facial features, and tan felt pads.
•    Lot #10, an early prototype of the company's 1997 Steiff Club edition felt elephant on wheels is estimated at $100-200. This 8" tall example retains its sample black and white ear tag with blank verso, as well as its factory original mocked-up 1997 porcelain medallion, as its Steiff IDs.

This auction's materials and ephemera with connections to popular performers and authors of yesteryear are certain to have a lasting impression on collectors.
•    Lot #853, Louisa May Alcott's signature clipped from a letter is estimated at $100-200. It is signed, Yours truly/L.M. Alcott and has 10 broken lines of writing in her hand on the reverse.
•    Lot #766, a photo of Harry Houdini and Anna Eva Fay taken in Melrose, MA in 1924 is estimated at $200-400. The image features the magician and the famed theatrical medium gazing into a reflective sphere.
•    Lot #826, a deck of Ricky Jay's Cards As Weapons promotional playing cards from 1977 is estimated at $300-400. These were produced to promote Jay’s cult classic book; this example is sealed in its original box, with a sample card showing the back design affixed to its box.

Jewelry, Disneyana, premiums, magic and gambling apparatus, books, and other once-in-a-lifetime antiques and collectibles round out this important summer sale.
•    Lot #648, a lithograph titled U.S.A. Surpasses All the Genocide Records! from c. 1966/68 is estimated at $2,000-3,000. This red and blue print was designed by George Maciunas (1931–1978) in collaboration with John Lennon and Yoko Ono as an advertisement for the John Lennon-Yoko Ono Gallery.
•    Lot #337, the original lead-off comic strip art for Mickey’s Christmas Carol from 1982 is estimated at $800-1,200. This ink over graphite on studio board piece from the Walt Disney Production/King Features Syndicate is the very first page installment of Disney’s twist on A Christmas Carol newspaper comic strip.
•    Lot #902, a Cartier tank watch with an Amal Guessous band and bracelet is estimated at $2,000-3,000. The pair were custom made for entrepreneur and community activist Mark Thomas of Chicago's The Alley.
•    Lot #351, a collection of two dozen scripts from the American science fiction TV series Star Trek: Deep Space Nine (1993-1999), and Star Trek: Voyager (1995-2001) is estimated at $300-500. Each has pink, blue, or black pictorial covers and is bound with brass binder pins.

According to Gabe Fajuri, President at Potter & Potter Auctions, "The phrase 'something for everyone' gets tossed around all too frequently, but in this case, it rings entirely true. We've never conducted such a diverse sale before, which makes the auction doubly exciting, as we expect to hear from many more collectors than usual. The auction truly represents a bit of each category we're known for."