Poe & Thoreau Among Fine Autographs and Artifacts at RR Auction 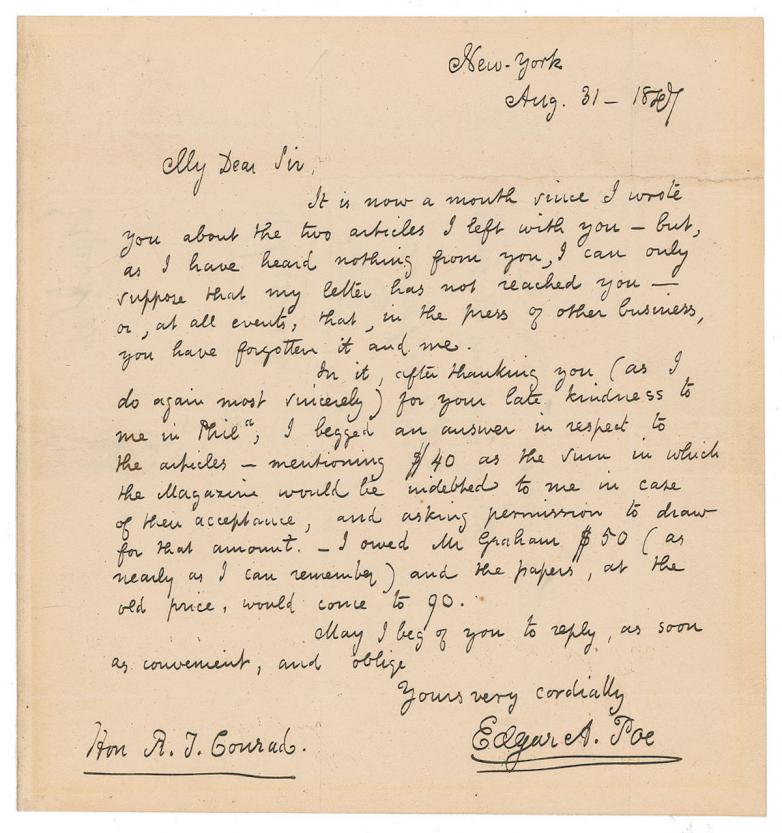 Highlights include; a Martin Luther letter critical of Jews. In German, the one-page handwritten letter is signed "Martinus Luther D," circa September 1, 1543. An extensive, uncommonly well-preserved letter to Georg Buchholzer, Provost of St. Nikolai in Berlin, regarding the latter's altercation with the Brandenburgian court preacher Johann Agricola from Eisleben (also known as 'Magister Eisleben') about the treatment of the local Jews. Prince-Elector Joachim II, who in 1539 had introduced the Reformation to Brandenburg and whose tolerant politics toward Jews enraged the population, had long desired reconciliation between Luther and his former disciple Agricola, and he must have suspected that Provost Buchholzer was poisoning Luther's mind against his court preacher. Buchholzer, therefore, wrote to Luther requesting an interpretation of some Biblical verses by which Agricola justified his pro-Jewish stance. In his answer, Luther insists that Buchholzer has done well to preach against the Jews shall continue to do so, ignoring the habitual liar Agricola. (Estimate: $250,000+)

Edgar Allan Poe handwritten letter with Poe, hoping to publish in the year of 'Ulalume'. The one-page letter signed "Edgar A. Poe," August 31, 1847. Poe's final letter to the Philadelphia lawyer and playwright Robert Taylor Conrad, editor of Graham's Magazine. In part: "It is now a month since I wrote you about the two articles I left with you—but, as I have heard nothing from you, I can only suppose that my letter has not reached you—or, at all events, that, in the press of other business, you have forgotten it and me." Accompanied by an engraved portrait and an export certificate from the French Ministry of Culture.

Poe had been editor of Graham's from February 1841 to April 1842, but continued to contribute after leaving the magazine's employ. It was where 'The Murders in the Rue Morgue' first appeared, along with several other Poe short stories and literary reviews. Graham's eventually began rejecting Poe's submissions, and infamously passed up the chance to publish 'The Raven' in 1844. A beautifully preserved letter directly associated with Poe's career as writer and critic—an immensely desirable autograph.(Estimate: $100,000+)

Henry David Thoreau signed letter. The extremely rare, early handwritten letter by "D. H. Thoreau"—his given name, before becoming 'Henry David.’ The one-page handwritten letter signed "D. H. Thoreau," Cambridge, June 22, 1837. Letter to John, in part: "I can write you nothing definite with regard to a room. I spoke with Mr. Lavering upon the subject, and he tells me that he has already received a number of applications, but is so circumstanced as not to be able to return any positive answer at present. However, he says he will remember you, and inform me of the result.

As Thoreau was completing his studies at Harvard in 1837, childhood friend and former Concord Academy classmate John Shepard Keyes was just about to begin his. Helping Keyes secure residence in the bustling college town, Thoreau penned this quick note and signed "D. H. Thoreau"; shortly after graduation, he inexplicably reversed the order of his first and middle names, signing himself 'Henry David' or 'H. D.' from that point forward. Upon his return to Concord that summer, he began his lifelong friendship with Ralph Waldo Emerson, who introduced him into the local literary scene and encouraged him to contribute essays to The Dial, where he began to make a name for himself. This letter to Keyes (who would also connect with Emerson years later, when his daughter married Emerson's son Edward) highlights a crucial year in the renowned author's life and has never before been published. Anything signed by Thoreau is highly sought after and incredibly rare; but even rarer are the few pieces signed "D. H. Thoreau," before unofficially changing his name. This letter is the only such example we have ever seen, an extraordinary literary treasure. (Estimate: $20,000+)

Thomas Jefferson letter to Madison on Jeremy Bentham and Czar Alexander I. The one-page handwritten note signed "Th: Jefferson," May 12, 1822. Letter to James Madison, "Mr. Madison," written from Monticello. In full: "I thank you for the communication of Mr. Rush's letter which I now return. Mr. Bentham's character of Alexander is I believe just and that worse traits might still be added to it equally just. He is now certainly become the watchman of tyranny for Europe, as dear to its oppressors as detestable to the oppressed. If however he should engage in war with the Turks, as I expect, his employment there may give opportunities for the friends of liberty to proceed in their work. I set out for Bedford tomorrow to be absent three weeks. I salute you with constant and affectionate friendship and respect.”

In early March, Richard Rush had sent a letter to Madison discussing several significant subjects, one being the tense situation between Turkey and Russia, fomented by the Greek War of Independence. Rush related philosopher Jeremy Bentham's criticism of the Russian leader, Emperor Alexander I, writing: 'Mr. Bentham says, that Alexander, unhappily for the power which he wields, is both a fop and a hypocrite, the most so that Europe has seen for ages. He anticipates nothing advantageous, but much of harm, to human liberty, from his reign.' A keen observer of international affairs, Jefferson's expectation of war between Russia and the Turks would be proven correct at the end of the decade: though Alexander I died in 1825, his successor, Nicholas I, went to war with the Ottoman Empire in 1828. A fantastic letter connecting the great political minds and figures of the 18th and 19th centuries. (Estimate: $20,000+)

Abraham Lincoln signed letter where Lincoln petitions Sumner for a Spanish-speaker. The one-page handwritten letter as president, signed "A. Lincoln," Executive Mansion letterhead, March 11, 1863. A brief letter to Senator Charles Sumner. In full: "I still have no name for Solicitor to go to Peru. Have you?" Matted and framed by Goodspeed's Book Shop with four images to an overall size of 12 x 16. An ardent abolitionist, Charles Sumner was also chairman of the Senate Foreign Relations Committee. A recently approved treaty with the South American country authorized the appointment of a solicitor 'learned in the Spanish language.' A desirable piece of correspondence demonstrating Lincoln's ability to balance the domestic tumult in the Civil War while keeping an eye toward American foreign relations. (Estimate: $10,000+)

Other top lots include a rare Adam Smith document, a stunning George Washington appointment, a Beatles album inscribed to George's sister, and an early document signed by Sun Yat-sen.

The Fine Autographs and Artifacts sale by RR Auction began on September 12 and will conclude October 7. For more information, go to www.rrauction.com.