Poe Letter to Autograph Seeker up for Auction 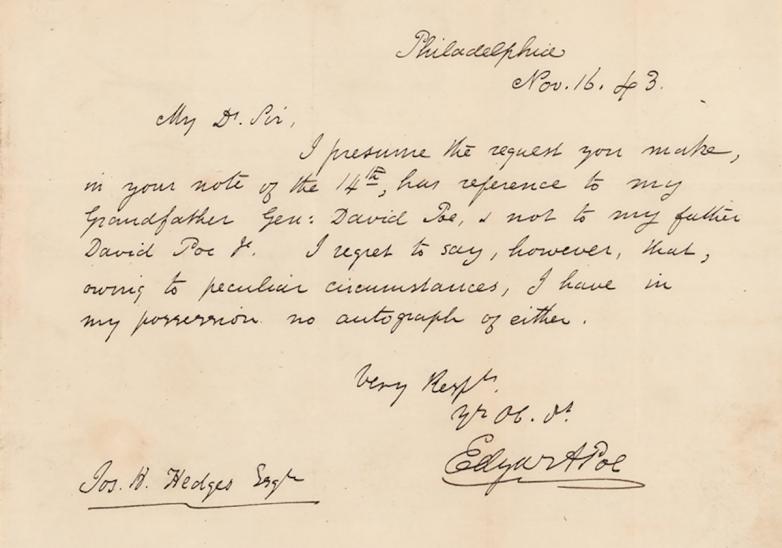 Boston — A remarkable Edgar Allan Poe letter to an autograph collector will be auctioned by Boston-based RR Auction.

The remarkable one-page handwritten letter signed "Edgar A. Poe," dated November 16, 1843. Letter to Joseph H. Hedges, in full: "I presume the request you make, in your note of the 14th, has reference to my grandfather Gen: David Poe, & not to my father David Poe Jr. I regret to say, however, that, owing to peculiar circumstances, I have in my possession no autograph of either."

The recipient, Joseph H. Hedges (ca. 1828-1905), was an early collector of autographs in Philadelphia, clearly seeking the signature of the author's ancestor: either David Poe, Sr., a quartermaster during the American Revolution, or David Poe, Jr., a little-known stage actor. Poe ponders the possibility of both, concluding that his grandfather—who contributed his personal wealth to the patriot cause, earning the esteem of the Marquis de Lafayette and the honorary title of 'General'—would have been more well known to the public.

The "peculiar circumstances" of Poe's upbringing resulted in his having none of their papers. His father, David Poe, Jr., abandoned the family when Edgar was an infant, and died shortly thereafter. His mother, Elizabeth Arnold Hopkins Poe, died just before he turned three, and the three Poe children were split up into three separate households. Young Edgar, taken in by John and Frances Allan (and christened with their surname as his middle name), would have had little in the way of family heirlooms.

By the time he penned this letter, Poe, then a magazine editor living in Philadelphia, had already written some of his best-known horror and mystery tales, including 'The Fall of the House of Usher,' 'The Masque of the Red Death,' and 'The Pit and the Pendulum'; in the same year, he wrote his timeless cryptological classic, 'The Gold Bug.' (Estimate: $75,000+)

"This is a stunning example of an autograph letter by America's master of the macabre," said Bobby Livingston, Executive VP at RR Auction.

The sale also features multiple Einstein letters with significant content on science and religion. Among them is a significant scientific letter documenting an early and critical stage of Einstein's re-evaluation of the ether concept. Einstein here gives a substantive account of "the state of the ether question." After first giving a brief historical overview of the ether, Einstein then considers its relationship to, and implications for, Relativity Theory: "The special theory of relativity is based on the knowledge that there can be no question of such a state of motion [of the ether]," Einstein here affirms. "If one wants to speak of ether as 'carrying' the electromagnetic phenomena, then this carrier has to be something completely different from what we otherwise call 'body', because one cannot speak of 'movement' with it. Under these circumstances it seems better to drop the whole concept and to speak more of electromagnetic and gravitational fields, but not to regard these as states of something else." Einstein forcefully concludes that "only these [gravitational and electromagnetic] fields appear in the laws [of physics]"—tersely pointing at General Relativity as the necessary intellectual context in which the ether question is to be resolved.

Unpublished and unknown to scholarship, the present letter is a valuable and important addition to our knowledge of Einstein's evolving view of the ether. Written at an early stage of Einstein's re-evaluation of the ether concept—before any of his formal public statements on the 'new ether'—the contents of this letter decidedly presage Einstein's first public announcement of his views in 1920. Historians of science are now finding their way to this 'ethereal' aspect of Einstein's thought—Ludwig Kostro's Einstein and the Ether is the key text in the field—and the present letter is a newly discovered document of critical importance to the historical record. (Estimate: $50,000+)

And an Isaac Newton Handwritten Manuscript on Religion. The important handwritten one-page religious manuscript by Isaac Newton, undated. Newton weighs in on a central tenet of Christianity, researching the origin of the doctrine of the trinity, writing in full: "The Council of Nice in decreeing the son to be ὁμοούσιος consubstantial to the father, understood that the father & son were two substances. For so the word ὁμοούσιος implies. But Hosius who (a - Athanas) published the Nicene Creed translated it unius substantiæ, & this translation gave occasion to some of the Latins to take the father & son for one single substance, & to the Greeks of this opinion to translate unius substantiæ by μιᾶς οὐσίας and μιᾶς ὑποστάσεως & to the western bishops in the Council of Serdica to declare that μίαν εἶναι ὑπόστασιν ῆν ἀντὸι ἀιρετικὸι οὐσίαν προσαγορεύουσιν, τοῦ πατρὸς καὶ τοῦ υἱοῦ καὶ τοῦ ἁγίου πνεύματος, that there is but one hypostasis of the father & son & holy Ghost."

This significant autograph statement illuminates the core of Newton's religious heresy. Newton held a view of the Trinity at variance with the Church of England—a heretical view punishable by death—and he here articulates the basis for his theological perspective. The document superbly testifies to Newton's critical mind and philosophic acumen; its use of Greek writing is uncommon. A central document for our understanding of Newton's view of God. (Estimate: $25,000+)

The Fine Autograph and Artifacts sale by RR Auction began on January 22 and will conclude on February 10. For more information, go to www.rrauction.com.