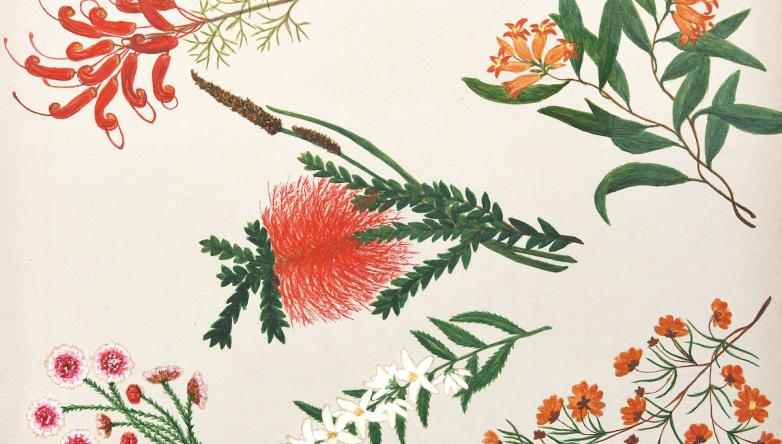 The catalogue presents a rich selection of works relating to expeditions, such as a collection of letters from the pioneering explorer Freya Stark and a first edition of the remarkable sub-Saharan travelogue ‘To Lake Tanganyika in a Bath Chair’. It includes an attractively bound set of volumes detailing James Cook’s fatal third voyage to the Pacific Ocean in 1776, with illustrations by official artist John Webber, whose capturing of the peoples encountered captured the European imagination and shaped European perceptions of the Pacific world for many years to come.

Documentary images from pioneering photographers offer a window into the people and landscapes of regions undergoing change, including the first photographic record of the British settlement in Aden. A lifetime album by Captain Samuel White Sweet presents a snapshot of 19th century South Australia in memorable images of aboriginal people and sheep shearers alongside the civic buildings of Adelaide. The catalogue also contains a remarkably rare sequence of images showing the ancient Silk Road city of Khiva during a period of rapid transition in 1920, the work of Khudaibergen Divanov, Uzbekistan’s first photographer, who was executed in Stalin’s Great Purge.

Another highlight is a letter written by Pulitzer-winning journalist Neil Sheehan to the editor of the New York Times on the eve of the American withdrawal from Saigon, conveying his disillusionment with the Vietnam ‘experiment’.

Collectors will find plenty of material documenting the natural world, such as a superb hortus siccus of ferns from West Bengal and a stunning album of highly accurate watercolours of Australian flora. Also of interest is an extraordinary personal archive from renowned naturalist Arthur Stannard Vernay containing over 3,000 original photographs offering insight into some of the most significant wildlife expeditions of the inter-war years.

Peter Harrington’s travel specialist Glenn Mitchell said of the catalogue, “At a time when travel has been reduced to a trip to the supermarket and exploration contracted to some of the lesser-walked streets in our neighbourhoods, we are delighted to be able to offer a selection from our extensive holdings in these areas, encompassing books, photographs, autograph letters, and original documentation. From early photography to written accounts by pioneering female travellers, this is a catalogue of discovery, and a testament to the history of human curiosity for the world around us.

The market for travel remains strong with collectors, and, perhaps as a reaction to the ever-expanding availability of printed material online, there has been a distinct increase in interest in original photography, manuscripts, letters, journals and official documentation, as people seek genuinely unique items.”