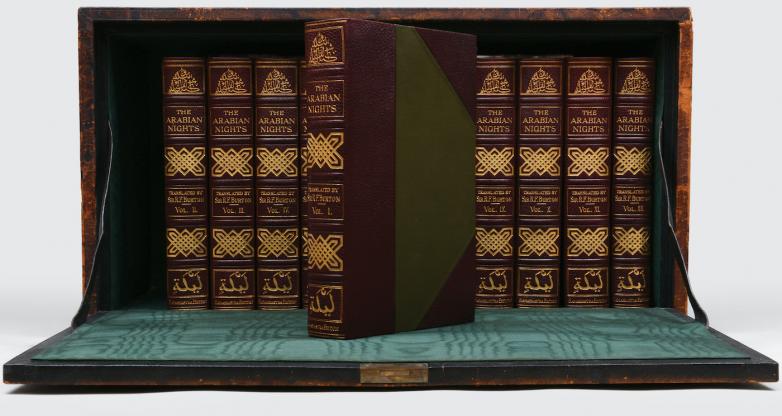 A handsome library set of Richard Burton’s Arabian Nights in twelve volumes, complete with 71 color illustrations and housed in the original box.

London — Peter Harrington has launched its new catalogue for presentation at the Abu Dhabi International Book Fair, taking place from 23 to 29 May 2021. Curated especially for collectors in the Arabian Gulf, the catalogue offers some of the most essential and sought after works of interest to the region.

The selection of 84 books and manuscripts is divided into two sections — the first a showcase of highlights from the Islamic and Arabic-speaking worlds and the second containing notable works from the Western canon.

Pom Harrington, owner said: “Whether we are able to exhibit this year or not, we are thrilled to present this catalogue, carefully curated with the Abu Dhabi fair in mind - an event we look forward to exhibiting at every year. We continue to see a strong interest in the Middle Eastern market in the culture and history of the region, but collectors and institutions maintain an essentially outward-looking focus. Our Abu Dhabi selection each year reflects this global interest, seeking to offer the best items of historical and cultural significance from around the world.”

Within the catalogue, there are many works of scholarly interest, including a first edition of Euclid’s Elementa Geometriae, the oldest mathematical textbook still in use today which was translated from the Arabic into Latin in the 12th century. A first edition of Charles Darwin’s On the Origin of Species and a landmark in microscopy complement the first Latin translation from the Arabic of geographer Muhammad al Idrissi, who was a major source for 17th-century historians and geographers.

A particular item of note is a rare first edition of Ptolemy’s Cosmographia, the most celebrated geographical treatise of classical antiquity. Well-known in the Arab World by the ninth century, this monumental achievement of geographical knowledge was forgotten in the west until brought to Italy from Constantinople around 1400.

Collectors will find several standout examples of illuminated works, including a remarkable Book of Hours in Latin and French with miniatures and richly decorative elements by the Master of Jacques de Besançon, one of the most sought-after French artists of the late 15th century.

The catalogue also contains a selection of works on natural history, including a guide to breeding pure-bred Arabian horses and a complete seven-volume edition of John James Audubon’s 19th-century The Birds of America with colour plates illustrating seven new species.

As well as showcasing books relating specifically to the region, Peter Harrington caters to collectors with a wide interest in the western canon, with the latter section of the catalogue containing rare and inscribed works of international prestige by writers including William Shakespeare, Niccolo Machiavelli, Adam Smith and William Blake.

Further highlights include:
● A 13th-century Latin Vulgate Bible on parchment illuminated in Oxford in the style of William de Brailles, from the library of enigmatic and unidentified 18th-century English book collector David Swan — £97,500
● A superbly coloured copy of the first edition of the privately printed chivalric poem Theuerdanck celebrating the heroic deeds of Emperor Maximilian, one of the finest illustrated books of the German Renaissance — £125,000
● An exceptional manuscript in Napoleon’s hand revealing his delighted notes on a copy of Adam Smith’s Wealth of Nations — £250,000
● First and only edition of a panegyric on Catherine II’s Russia, one of the first publications to use an Arabic font in Russia — £9,500
● Mahometism Fully Explained, first Muslim biography of the prophet Muhammad translated in English — £5,000
● First Latin translation from the Arabic of geographer Muhammad al Idrissi, a major source for 17th-century historians and geographers — £9,500
● Unique photo documentation of the landmark Nasif House in Jeddah before its early 1980s restoration, widely recognised as one of the most important surviving examples of Red Sea coralline limestone architecture — £6,500
● A guide to breeding pure-bred Arabian horses by Prince Mohammed Ali Tewfik, presented by him to an eminent Australian army officer — £2,750