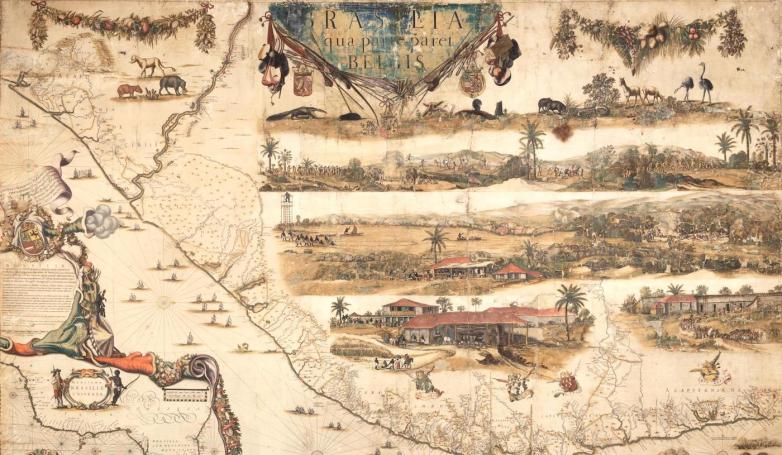 Berkeley, CA — PBA Galleries announced a PBA Platinum Sale on Thursday, February 10th, 2022. The sale consists of 113 select lots of rare, important, and valuable material in all fields, with printed books from the 16th to 21st centuries containing landmarks of science, literature, and history; stunning maps of the various regions of the world; original artwork; rare photographic views; manuscripts; and much more.

The auction will be held at the Oakland Marriott City Center Hotel (1001 Broadway, Oakland, CA 94607), venue of the 54th California International Antiquarian Book Fair. The sale venue is open to in person previewers and bidders for the first time in nearly two years. On-site previews begin at 8:00 am with the auctioneer taking the podium at 10:00 am.

Thomas Salusbury’s Mathematical Collections and Translations, with the first edition in English of Galileo’s Dialog, 1661, comprising the majority of the volume. Galileo’s most famous work and of seminal importance in establishing the heliocentric theory of the solar system. Also included is Galileo’s Letter to the Archduchess of Tuscany on the relation of science and theology as well as other important texts on the subject, by Johannes Kepler and others. (Estimate: $30,000-$50,000); Another mathematics work, The First Six Books of the Elements of Euclid will be on the block. A remarkable presentation, in which colored diagrams and symbols are used was printed at the Whittington Press for William Pickering and is one of the rarest and most sought-after color-printed books of the 19th century (Estimate: $20,000-$30,000).

A Manuscript Royal Order authorizes the colonization of the Californias, dated 1705, and is signed by Philip V, King of Spain, "Yo el Rey." This highly important document, addressed to the Viceroy of New Spain, gives Father Maria de Salvatierra of the Jesuits permission to establish missions, as well requesting a report on his progress. An exceptionally rare document of paramount import. (Estimate: $30,000-$50,000)

George Vancouver’s A Voyage of Discovery to the North Pacific Ocean, from 1798, in three volumes plus the folio Atlas, is one of the great accounts of Pacific exploration, rivaling the works of Cook and La Perouse (Estimate: $20,000-$30,000). Also from the New World, Brasiliae qua parte paret, a rare oversize map of Brazil by Georg Margraff, published by Joan Blaeu in 1657, with striking hand-colored pictorial engravings, is one of only a handful of copies extant (Estimate: $10,000-$15,0000). A rare 1849 Gold Rush guide, California Gold Regions, compiled by F.M. Pratt, is one of the earliest and scarcest of all guides; this one in the rare original printed wrappers (Estimate: $10,000-$15,000).

Other featured lots include: an autograph letter signed by Marcel Proust, from 1907, to his friend and confidante Mme Catusse, referring to a duel he had witnessed, and to his lover Lucien Daudet (Estimate: $10,000-$15,000); a vintage original 1955 photograph of James Dean at a bongo class, taken for submission to Life Magazine for a photo essay on the rising motion picture star (Estimate: $5,000-$8,000); and an important and revealing archive of documents and bulletins from the War Relocation Authority detailing the role of American social scientists in the internment of United States Citizens of Japanese ancestry, dating from 1942 to 1956 (Estimate: $10,000-$15,000).

PBA continues to safeguard the health of employees and clients and is open by appointment only. Live auction participation for this is available as well as online or phone bidding. For more information about upcoming sales, to schedule a Zoom preview or phone bidding for a future auction, please contact the galleries at 415.989.2665 or pba@pbagalleries.com.