Part I of the Forbes Collection, Plus Kerouac, at University Archives Online 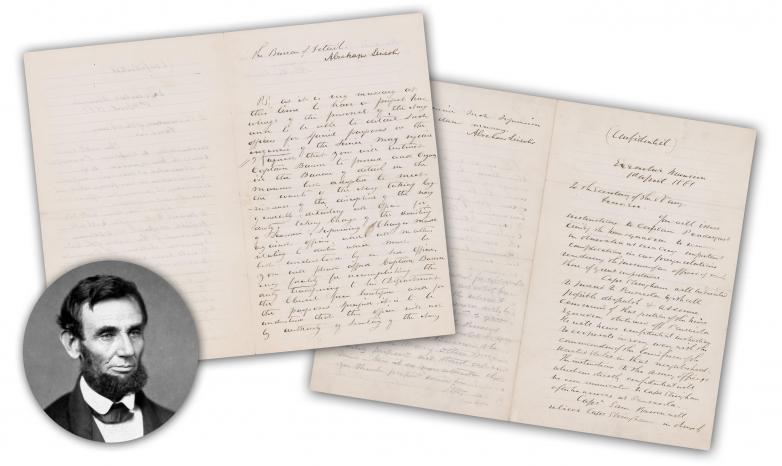 Letter twice signed by Abraham Lincoln, dated April 1, 1861, revealing a conspiracy to thwart Lincoln’s cabinet members and the President himself on the eve of the Civil War (est. $26,000-$30,000).

Westport, CT – Part 1 of the Forbes Collection – 49 lots of phenomenal items from the estate of Malcolm Forbes (1919-1990), the multimillionaire magazine publisher and discerning collector of Americana – and Part 2 of items from the estate of Beat Generation writer Jack Kerouac will headline University Archives’ next online auction slated for Wednesday, March 25.

The auction will start promptly at 10:30 am Eastern time. In total, 215 lots are scheduled to come up for bid. The catalog has been posted online and bidding is available via LiveAuctioneers.com, Invaluable.com and Auctionzip.com. Telephone and absentee bids will also be accepted. Folks can visit the website and browse the full color catalog now, at www.UniversityArchives.com.

The auction is packed with rare books, manuscripts, relics and more, many of them signed by history’s brightest luminaries. Presidential items span the administrations of George Washington through George H.W. Bush (including a twice-signed Lincoln letter); Americana includes a Civil War Fort Sumter missive; and foreign lots include King George III and William Pitt the Elder.

The literary category features 45 lots from Kerouac alone, plus items from F. Scott Fitzgerald, Edgar Allan Poe, Walt Whitman, Jack London and others. The music and entertainment field is extensive and includes Pyotr Tchaikovsky, George Gershwin, The Beatles, George Harrison, Bob Dylan, Janis Joplin, Freddy Mercury, The Who, David Bowie, U2 and many other stars.

The centerpiece of the Forbes Collection is an April 1, 1861 letter twice signed by Abraham Lincoln, inscribed by military officers Montgomery C. Meigs and David D. Porter, and endorsed by Secretary of War Gideon Welles. Not only does the date make this letter exceptional, but its content and subtext are also significant. Revealed within is a conspiracy to thwart Lincoln’s cabinet members and the President himself on the eve of the Civil War (est. $26,000-$30,000).

Also from the collection is a clean and bright first edition copy of George III’s infamous Stamp Act proclamation (est. $7,000-$8,000), as well as an archive of ten letters signed by William Pitt the Elder in 1773, just a few years before the American Revolution, in which he wrote: “Things seem to be hastening to a crisis at Boston… I look forward to the time with very painful anxiety. The whole constitution is a shadow.” The archive carries a pre-sale estimate of $10,000-$12,000.

Part II of the Kerouac collection includes 45 lots of the Beat writer’s compositions, books and beloved possessions, pulled directly from his estate. Top lots include Kerouac’s own first edition copy of his 1957 classic book On The Road (est. $5,000-$6,000); a pencil drawing titled Weird Self-Portrait at Sea, signed by Kerouac as “Jean Louis Kérouac” (est. $4,000-$5,000); and Kerouac’s much-loved silver-toned crucifix attached to a jute cord, expected to hit $600-$700.

Other memorable Kerouac items range from his original haiku poetry and voice recorder to cocktail glasses, Bohemian tunics, and even the writer’s underwear. Items will be accompanied by estate certification signed by John Shen-Sampas, executor of the Kerouac estate by descent.

University Archives is celebrating music, arts, and letters with an impressive array of musical memorabilia, led by a rare first UK pressing of the Beatles’ debut EP, Twist and Shout, signed by all four Beatles on the cover (est. $16,000-$18,000). The four-song EP is on the Parlophone (UK) label. Alexander Calder and Frank Lloyd Wright jockey for prominence in the fine art category.

The following is just a sampling of the many presidential lots being offered in the sale:

A spectacular framed scroll signed by Hsuan Tung - PuYi, measuring 9 ½ inches by 33 inches (sight) and appearing to be rendered on cloth, has an estimate of $10,000-$12,000. The scroll is accompanied by an autograph letter in a hand similar to that of the PuYi’s English writing, but that cannot be authenticated. The letter is addressed to a W.T. Lawhead and dated July 12, 1933.

Greta Garbo’s personally owned, monogrammed and worn Fredrica three-button mink coat, with a signed check to her furrier (as “Greta Garbo”) in the amount of $37.10 and receipts regarding the coat, is expected to sell for $10,000-$12,000. Also, a menu from the Jack of Clubs nightclub in London, England, signed and inscribed by Muhammad Ali as Cassius Clay (“To Jo, from Cassius Clay, Good Luck, 1963”) prior to his fight with Henry Cooper, should hit $2,000-$2,400.

A one-page autograph letter written in French and signed by the French scientist Pierre Curie (1859-1906), as “P Curie” at the bottom, dated April 7, 1905 and addressed to the secretary of the Royal Society of Surgery and Medicine, has an estimate of $7,000-$8,000. Also, an envelope fully engrossed by the Russian composer Pyotr I. Tchaikovsky (minus the letter, which had been addressed to the conductor Eduard Franzhevich Napravnik), postmarked Feb. 3, 1884 in Moscow and nicely displayed to the right of a quality photo of Tchaikovsky, should make $1,800-$2,000.