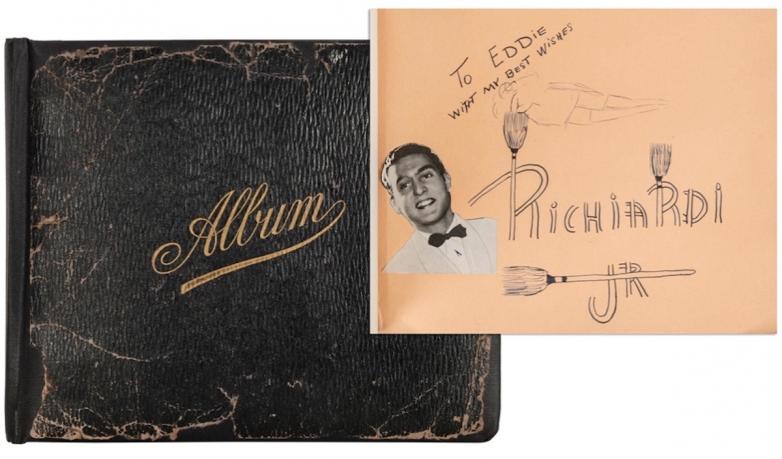 Chicago — Potter & Potter Auctions is pleased to announce this nearly 500 lot sale to be held on Saturday, June 19th starting at 10am CDT. The event will be held online and live streamed, with a limited number of bidders physically allowed in the gallery as determined by current Illinois public health attendance guidelines. Please call the auction house, located at 5001 W Belmont Avenue in Chicago, at 773-472-1442 to reserve seats, with first come, first served. Bidding will take place through Potter & Potter's website, at www.potterauctions.com. Phone and absentee bids are also welcome. All items are available for in-person preview, by appointment only.

Historically important, magic related paper based items of interest take several of the top slots in this sale.
•    Lot #53, a large archive of Robert Harbin (British, 1908-1978) ephemera and correspondence, is estimated at $12,000-16,000. Harbin, an author and magician, was the inventor of a number of legacy illusions, including the Zig Zag Girl. This collection, which must be seen to believed, was gathered over the course of decades and includes letters, personal and professional correspondence, signed book agreements, scripts, manuscripts, explanations of his tricks, publicity materials, and much more.
•    Lot #33, a signed Chung Ling Soo theatre contract for the magician’s appearance at the Grand Theatre or Hippodrome, Bolton, is estimated at $2,000-3,000. It states that Soo was to perform for “One week commencing December 2 1918.” But it was not to be; Soo died on stage at the Wood Green Empire on March 24, 1918 when his Bullet Catching feat went tragically wrong.
•    Lot #8, a remarkable autograph album of famous magicians, is estimated at $2,000-4,000. It was compiled by magician Eddie Dexter over the 1914-1950s timeframe. It contains almost 70 signatures, as well as signed photographs, ephemera, and postcards of magicians from the Edwardian age through the dawn of television.
•    And two signed and inscribed photographs of Harry Houdini also deserve the spotlight in this category. The first, lot #65, features Houdini piloting his biplane over Germany in 1909. The second, lot #66, shows Houdini performing his Outdoor Straightjacket Escape in Providence, RI in 1917. These are estimated at $2,000-4,000 and $2,500-5,000 respectively.

Century spanning apparatus with connections to magic industry superstars is also well represented in this June sale.
•    Lot #219, a c. 2000 Willmann candle illusion by Rüdiger Deutsch, is estimated at $3,000-6,000. This beautiful 26-1/2" tall recreation, in which the lit flames of seven candles transpose between two large candelabras, is based on an original in the Klosterman collection.
•    Lot #222, a c. 1990s Cannon Ball Vase by Rüdiger Deutsch, is estimated at $3,000-5,000. This replica trick, directly from the Hoffmann era, is one of six made and is comprised of a large Morison Pill Box which is used to produce and vanish a cannon ball at will, which may then be reproduced from a top hat.
•    Lot #253, a 1960s-era Ken Brooke Master Chop Cup, is estimated at $3,000-5,000. This 4" tall spun aluminum example was owned and used by British magician and TV personality Paul Daniels (1938-2016) for years. At its peak, his BBC program “The Paul Daniels Magic Show” was viewed by some 18-million people – approximately one third of the entire population of Britain.
•    Lot #262, a 1920s-era animated skull made in Vienna by S. Klingl, is estimated at $4,000-8,000. This prop consists of an 8-1/2" tall genuine human skull mounted on a wooden platform and isolated under a glass dome. It nods to answer “yes,” or shakes back and forth to answer “no” when questions are posed by the magician or audience. Unlike other models of this classic effect, this example incorporates a real human skull, and is animated in a fashion different to all others we have encountered.
•    Lot #401, a turn of last century Magic Laundry prop made in Germany by Carl Willmann, is estimated at $3,000-5,000. This trick consists of an iron and wash basin set to accomplish a magical washing routine with a borrowed handkerchief. A soiled pocket square is magically “washed” in the basin, then “pressed” into like-new condition by the iron. These props were used on stage by Rüdiger Deutsch in his Bellachini XIII act.

This sale also includes fine selections of antique posters promoting popular 20th century performers and acts.
•    Lot #184, a Harry Houdini Final Tour billboard poster from 1925, is estimated at $2,000-4,000.This rarity features Houdini’s smiling bust portrait flanking the central text advertising his show, while bats and a witch appear on the opposite end of the poster.
•    Lot #198, a c. 1910 framed Maskelyne & Cooke’s Mysteries. Will, the Witch and the Watchman poster, is estimated at $2,000-4,000. This full color, half-sheet lithograph was printed in London by David Allen & Sons, Ltd., and is illustrated with a portrait of a witch and a monkey, reminiscent of Flagg’s iconic “I Want You” recruiting poster. Will, The Witch, and the Watchman was Maskelyne's most popular magical playlet, produced over 5,000 times at both the Egyptian and St. George's Halls in London.
•    Lot #206, a Thurston. World’s Greatest Magician linen backed poster, is estimated at $5,000-8,000. This color stone lithograph was printed in Cincinnati by The Strobridge Litho. Co., in 1909. It portrays Kellar's successor performing a rapid transposition illusion with the assistance of imps and gnomes, the scenes on either side of his portrait captioned “beginning of trick” and “end of trick” to show the action as seen on stage.

Extraordinary photo postcards are certain to conjure up significant interest at this magic sale.
•    Lot #74, a Harry Houdini Keith Theatre portrait postcard, is estimated at $800-1,500. This mailer was canceled in Providence, RI on Feb. 23, 1906, and bears a handsome portrait of the magician. It is addressed to Mr. A. Bucklet of Manchester, England, most likely in Houdini’s hand.
•    Lot #76, a photo postcard of Harry Houdini piloting his airplane, is estimated at $400-800. This divided back example is captioned “Houdini piloting his Voisin Biplane. The first successful aviator in Australia wins the Australian Aero League's Trophy, March 15, 1910. Melbourne, Australia.”
•    Lot #19, five signed postcards from Richard and Swan Cardini to fellow magician and prop manufacturer Danny Dew (American, 1906-1996) and his wife, is estimated at $300-600. These cards, all in blue ink, date from the 1960s and are in regards to the Cardini's performances in in Tel Aviv, Virginia, Florida, Venice, and Monaco.

This event rounds out with a library of fine magic book selections.
•    Lot #481, a copy of  Professor Pepper's The True History of Pepper’s Ghost, is estimated at $600-1,200. This late 19th century illustrated tome by John Henry Pepper was published in London by Cassell & Co. It has cloth backed pictorial boards and a folding frontispiece. It includes contemporary marginalia in an unknown hand with references to phantasmagoria, Porta’s Natural Magick, and related subjects, and with several sheets of notes in the same hand laid in.

According to Gabe Fajuri, President at Potter & Potter Auctions, "This sale offers the best of both worlds for magic collectors - a strong assortment of paper items (posters, ephemera, and photographs, plus Houdiniana), and amazing mechanical apparatus from the collection of Rüdiger Deutsch. I have high expectations for the auction, as both of these categories have been proven winners for us in the past."