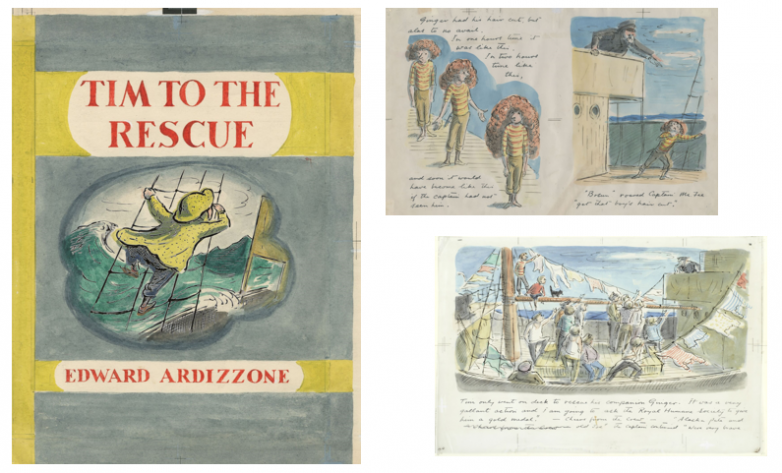 London — The complete artwork for the much-loved children’s picture book, Tim to the Rescue, by Edward Ardizzone is to be offered at Bonham Fine Books and Manuscripts sale in London on Wednesday 4 December. It is estimated at £30,000-50,000.

Published by Oxford University Press in 1949, Tim to the Rescue is the third in Ardizzone’s Little Tim series of picture books which began with the publication of Little Tim and the Brave Sea Captain in 1936. The adventures of Tim – all of which take place at sea – quickly gripped the imagination of children on both sides of the Atlantic. When Ardizzone returned from military service as an official war artist in World War II, he began work on a new tale, which, like its predecessors, he both wrote and illustrated. Tim to the Rescue introduces Ginger, a mischievous cabin boy whose life Tim saves during a storm and who reappears later in the series.

Writing in the winter edition of Bonhams Magazine, the writer, broadcaster and Ardizzone enthusiast Stephen Fry said, “I only have to catch sight of the name Edward Ardizzone to be transported back to my childhood. The scrap-faced and often undernourished children that people his illustrations never tried to offer me friendship and comfort or to welcome me into an attractive and happy lifestyle – I think that is why I trusted them. They promised a true escape from adult, or cutesy children’s worlds.”

The sale also includes the complete artwork for Diana and Her Rhinoceros, estimated at £10,000-20,000. The story tells of the calm reaction of a young girl, Diana, when a rhinoceros appears in her suburban house, after which a beautiful lifelong relationship ensues between the two. Published in 1964, it was inspired by Ardizzone’s visits to his daughter Christianna's family in Richmond.

The artwork is being sold by Ardizzone’s grandson, Dominic Clemence who said, “My grandfather was a wonderful storyteller, and used to entertain my mother and her brothers with stories, which later became manuscripts for the Little Tim series. The proceeds from the sale will benefit his great, great grandchildren, and he would be delighted to know that his work is still being of great support to his family.”

Bonhams Head of Books and Manuscripts, Matthew Haley said, “Edward Ardizzone’s Tim books are a magical and much-cherished part of so many people’s childhoods. The original artwork is wonderfully fresh, and a real insight into how Ardizzone was able to create his memorable characters with such economy of word and line.”

END_OF_DOCUMENT_TOKEN_TO_BE_REPLACED

Appraisals and rare books in all fields. Est. 2020