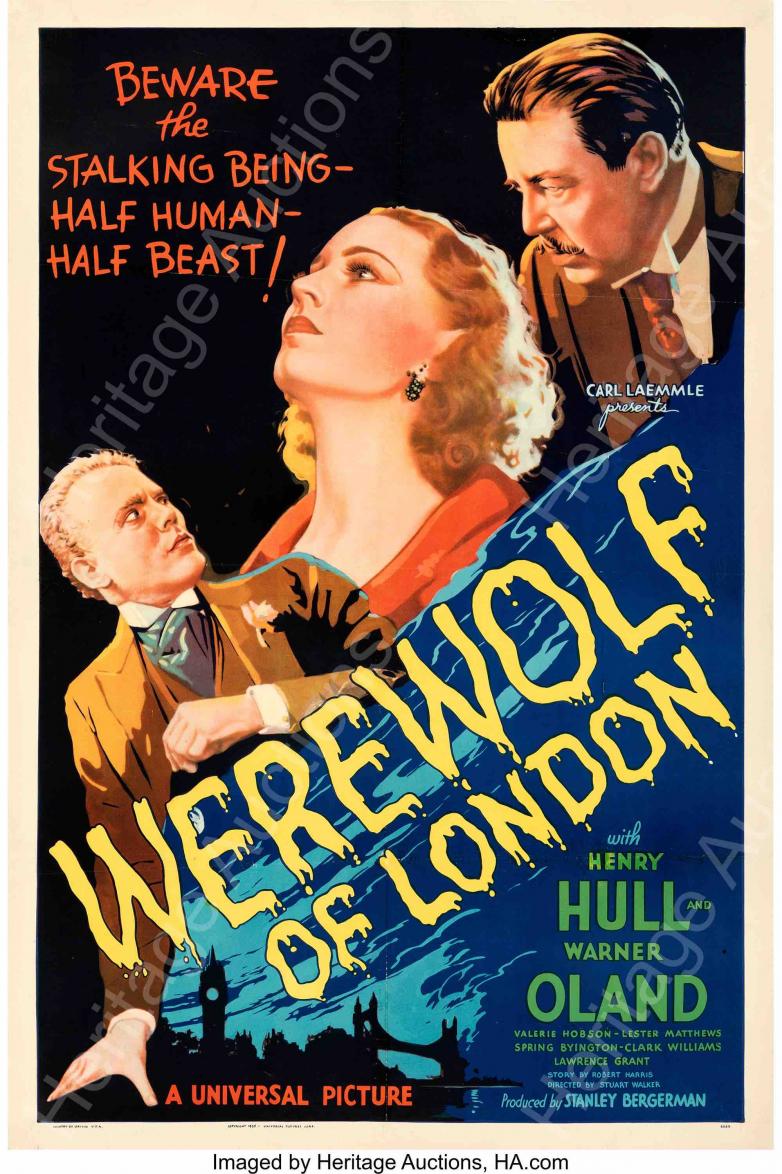 Dallas, TX – A pair of rare Russian constructivist posters and an extraordinary Werewolf in London one sheet are capturing the attention of collectors in anticipation of Heritage Auctions’ Movie Posters Internet Auction Nov. 23-24 in Dallas, Texas.

Werewolf of London (Universal, 1935) One Sheet (estimate: $60,000-120,000) is as rare as it gets, the only known one sheet from the horror classic in this style (two styles were created). Big paper from the film is exceptionally rare, adding to the demand for this 27-by-41-inch masterpiece.

The Russian Constructivist posters are Battleship Potemkin (SovKino, R-1929) Russian Poster (estimate: $50,000-100,000) and October 1917 (Ten Days that Shook the World) (Sovkino, 1928) Russian Poster (estimate: $40,000-80,000). Constructivism is an artistic and architectural philosophy that started in Russia in 1913 by painter and architect Vladimir Tatlin, who wanted to “construct” art.

“These posters are incredibly rare – there’s fewer than a handful of each known to exist,” Heritage Auctions Vintage Posters Director Grey Smith said. “They both are from before World War II, which decimated so much of that country, including paper goods. That any survived this long, especially this condition, is pretty hard to believe.”

The Battleship Potemkin poster features artwork by Vladimir and Georgii Stenberg and is being offered through Heritage Auctions for the first time. The Stenberg brothers are known for their colorful geometric posters, and it is not surprising that they were chosen to create this poster for the 1929 reissue of what many consider to be the greatest propaganda film ever made. The brothers’ success can be traced to their skill as graphic designers, as well as their knowledge of both avant-garde theater and film history, and the fact that they fully embraced Constructivism. Battleship Potemkin remains director Sergei Eisenstein’s undisputed masterpiece.

The October 1917 (Ten Days that Shook the World) also is being offered at Heritage Auctions for the first time. The Russian Soviet government selected Eisenstein to direct one of two films celebrating and dramatizing the 10-year anniversary of the October Revolution. The faces on the poster are difficult to identify, in keeping with Eisenstein’s strong socialist beliefs; rather than casting professional actors, he cast everyday citizens who had a resemblance to historical figures.

Another unquestioned rarity is a Dracula (Universal, 1931) Jumbo Lobby Card (estimate: $40,000-80,000). Lobby cards of this size for the horror classic are undeniably scarce; this example is even more coveted because it once belonged to Bela Lugosi, the Hungarian-American actor known best for playing the film’s title role. The lobby card was printed in very limited number, and only a few have surfaced. The image on the card, of Lugosi with co-star Helen Chandler, is among the most iconic images ever distributed for the film.

After the 1931 success of Dracula, Lugosi initially agreed to play the role of Frankenstein, but backed out before filming because the character had no lines. Director James Whale replaced him with Boris Karloff, whose tall, gaunt appearance perfectly fit the role and is the dominant image on a Frankenstein (Universal, 1931) Lobby Card (estimate: $30,000-60,000). The design for the lobby card was adjusted before filming started, and the image used on this card is from the test shot just before makeup artist Jack Pierce finalized the monster’s makeup.