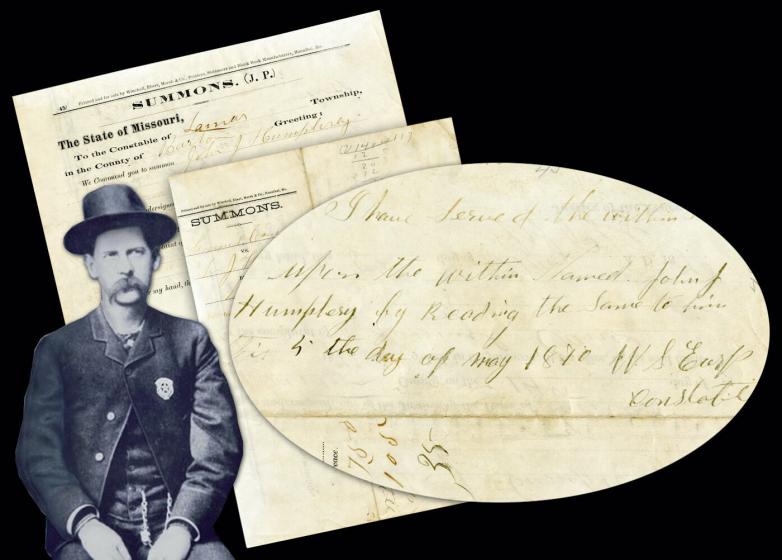 Wilton, CT – A rare and historic Revolutionary War powder horn, an extensive archive of material pertaining to Playboy magazine’s Hugh Hefner, a document signed by John F. Kennedy as President and a legal summons signed by the legendary lawman Wyatt Earp will all be part of University Archives’ online auction on Wednesday, November 10th, at 10:30 am Eastern time.

The Rare Autographs, Photographs & Books auction features exceptional historical material from multiple collecting categories. “Over thirty lots of the sale illustrate the fascinating and violent history of the Old West, with many pieces from the personal collection of celebrated Western photographer Jim Tackett,” said John Reznikoff, the president of University Archives.

The catalog, with all 391 lots, is up for viewing and bidding now, on the University Archives website (www.UniversityArchives.com) as well as LiveAuctioneers.com, Invaluable.com and Auctionzip.com. Phone and absentee bids will also be accepted. It’s the eighth auction that will be conducted from University Archives’ modern new 6,000-square-foot facility in Wilton, Conn.

The powder horn belonging to 18-year-old minuteman Oliver Buttrick and used at the Battle of Concord on April 19, 1775 is a remarkable relic of the Revolutionary War and carries a modest pre-sale estimate of $90,000-$100,000. The Battle of Concord was the first battle of the Revolutionary War, and witnessed the “shot heard ‘round the world” that both announced and legitimized the American Revolution. It would be hard to think of a better relic symbolizing American freedom than this item. The horn has an ownership label on vellum at its base and is accompanied by over 50 pages of provenance that is available by request as a pdf.

The large archive of original letters, cartoons, photographs and memorabilia relating to Hugh Hefner’s 75-year relationship with high school classmate and close friend Jane “Janie” Borson Sellers is expected to realize $50,000-$60,000. Included are over 150 letters by Hefner, half of which are illustrated with pen and ink cartoon drawings by him.

The one-page document signed by President John F. Kennedy on January 21, 1961, and countersigned by Secretary of State Dean Rusk, appointing “Robert S. McNamara of Michigan…Secretary of Defense”, should reach $30,000-$35,000. At the time McNamara was the youngest person ever appointed Secretary of State. He served from 1961-1968 and was largely responsible for intensifying American involvement in the Vietnam War.

The many lots documenting the lawlessness and disorderliness of the Wild West include the summons personally endorsed by a young Wyatt Earp, then just 21 years old and on his first job in law enforcement, as constable of Lamar, Missouri. In May 1870, Earp clearly wrote over twenty words on the back of a legal summons and signed it “WS Earp constable” (estimate: $30,000-$35,000).

A Civil War-dated autograph album compiled by a correspondent of Treasury Secretary Salmon P. Chase contains 180 signatures of Lincoln administration officials and members of the 37th U.S. Congress, including President Abraham Lincoln himself and six current and future Lincoln cabinet members (Seward, Chase, Welles, Stanton, Smith and Fessenden). It is estimated to fetch $20,000-$24,000.

An important compilation of original documents written and/or signed by members of the Hartford Convention of 1814-1815, compiled by Washington real estate developer and manuscript collector Marshall B. Coyne, including documents from all 26 delegates from five states and the Convention secretary, should earn $18,000-$20,000.

A rare letter handwritten by then-President Zachary Taylor to Secretary of the Interior Thomas Ewing, introducing Henry Waller of Louisiana, dated Nov. 27, 1849, has an estimate of $12,000-$14,000. Also, a one-page, partially printed document boldly signed by John Hancock, dated Jan. 1, 1776, appointing a Captain to the 7th Regimen of Foot (the “do not fire until you see the whites of their eyes” Regiment of Battle of Bunker Hill celebrity) should rise to $8,000-$10,000.

An autograph letter written on White House letterhead, signed “Franklin D. Roosevelt” as President, addressed to Frank Deering of Saco, Maine, a fellow Naval history collector, dated Feb. 19, 1934, is estimated to go for $10,000-$12,000. Also, an autograph letter signed by Charles Darwin written to his land agent John Higgins in 1859, just a few weeks prior to publication of his On the Origin of Species, should hit $3,000-$4,000.

A large bust portrait photograph of the renowned American architect Frank Lloyd Wright, boldly signed and inscribed on the mat, “To Max Moffett at Taliesin Aug 24/50 Frank Lloyd Wright”, is expected to finish at $5,000-$6,000; while a large, glossy black and white photograph of all four Beatles, signed, inscribed, dated and numbered by French photographer Jean-Marie Périer (b. 1940), framed, should garner $3,000-$4,000.