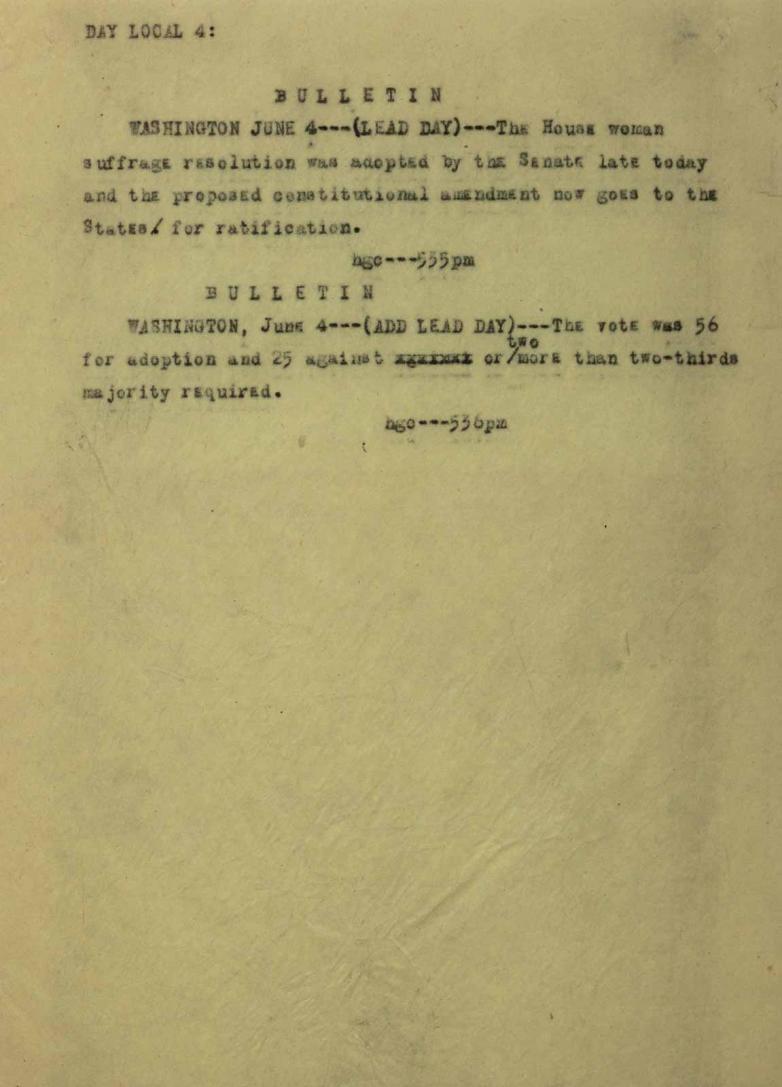 Courtesy of the Library of Congress Manuscript Division

An AP news bulletin from June 4, 1919, reporting that the U.S. Senate had passed a resolution for women's voting rights that would become the 19th Amendment to the Constitution.

Washington, D.C. -- Historical news reports and breaking news bulletins published by the Washington bureau of The Associated Press from 1915 to 1930, documenting a full chronology of world and national events, have been digitized and are now available online from the Library of Congress.

The collection includes news dispatches from key moments in history, from the sinking of the Lusitania ocean liner in 1915, drawing the U.S. into World War I, through the roaring 1920s to the stock market crash of 1929 and the outbreak of the Great Depression.

The AP collection includes 375 volumes of wire copy, totaling more than 387,000 images. It is online at: loc.gov/collections/associated-press-news-dispatches-1915-to-1930/about-this-collection/.

The Associated Press was formed in 1846 by five newspapers in New York City.  Other regional AP associations soon followed, as did individual bureaus in major American cities, as the telegraph and the railroad began linking the country together in the 1860s. Eventually, these later merged into one national news cooperative, headquartered in New York.

The Washington bureau gave the news dispatches to the Library of Congress in 1944. The collection provides an unbroken chronology not only of world events, but also of national and local news, such as a daily report on the “Condition of the U.S. Treasury” and a “Lead Crop Report” describing the size of the year’s winter wheat crop.

Highlights of the collection include:
•    A 1915 bulletin on the sinking of the Lusitania and Washington’s reaction;
•    A report on President Woodrow Wilson asking Congress for a declaration of war to enter World War I in 1917;
•    A 1918 bulletin on Wilson signing an armistice to end the war with Germany and report on Wilson signing the Treaty of Versailles in June 1919;
•    News that the Senate voted 56-25 on June 4, 1919, approving a resolution for women’s suffrage and sending the constitutional amendment to the states for ratification;
•    Reports that the Senate passed a prohibition act over the president’s veto in October 1919 to prevent the sale of alcoholic beverages;
•    Coverage of Charles Lindbergh’s first solo trans-Atlantic flight from New York to Paris in 1927;
•    Washington’s reaction to the stock market crash of 1929.

The coverage of Lindbergh’s history-making flight elicited colorful reaction from AP journalists. The flight, they wrote, “thrilled Washington out of its traditional stolidity.”

“The thought of this young air man, winging his way alone through the darkness of the night, over deserted ocean waters, and depending for his life on his own skill and courage, aroused the interest and touched the imagination of the capital as few things have done in the past,” the AP reported.

The digitization of the AP collection is part of a larger effort to make historical materials available online. Other newly digitized collections include the papers of suffragists Carrie Chapman Catt, Susan B. Anthony and Elizabeth Cady Stanton, Presidents Theodore Roosevelt and Woodrow Wilson, and others. The digitization reflects advancement toward a goal in the Library’s user-centered strategic plan to expand access, making unique collections available when, where and how users need them. Learn more about the Library’s five-year plan at loc.gov/strategic-plan/.