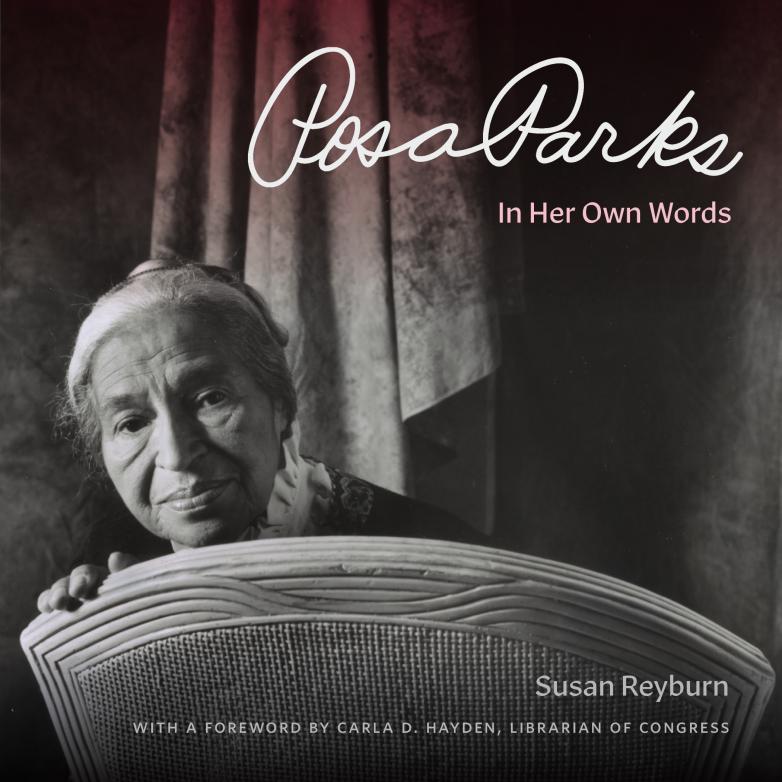 The new book, Rosa Parks: In Her Own Words reveals the civil rights icon through her private manuscripts and handwritten notes for the first time.

Washington, D.C. — A new book from the Library of Congress reveals the civil rights icon, Rosa Parks, for the first time in print through her private manuscripts and handwritten notes. The publication with University of Georgia Press is a companion to the new exhibition of the same title, Rosa Parks: In Her Own Words.

For years, Parks’ personal papers were not available to the public. Her personal writings, reflections, photographs, records and memorabilia were placed on loan with the Library in 2014 and became a permanent gift in 2016 through the generosity of the Howard G. Buffett Foundation.

The new book, written by Susan Reyburn of the Library of Congress, explores a variety of objects from the Rosa Parks Collection that bring to light Parks’ inner thoughts and struggles throughout her life and activism. At the height of the Montgomery Bus Boycott in 1955 and 1956, Parks was both pilloried and celebrated – and found catharsis in her writing.

“With the publication of Rosa Parks: In Her Own Words, the Library of Congress is pleased to share a rarely seen view of an extraordinary woman through her private writings and in her own hand,” Librarian of Congress Carla Hayden wrote in the book’s foreword. “These writings reveal her keen observations, youthful rage, strong faith, and ongoing hope, as well as an abiding love for those closest to her.”

Parks’ writings include her description of her infamous arrest on a city bus after she refused to give up her seat to a white man, candid reflections on the segregated South, recollections of childhood experiences, letters to her family during the boycott and in the aftermath, and notes from a lifetime of battling inequality.

Rosa Parks: In Her Own Words draws on this collection of handwritten descriptions, recollections and letters to shed new light on the life of a civil rights icon. It is the first book to reproduce some of Parks’ personal manuscripts in print.

Lesser-known anecdotes from Parks’ life in the book include:
•    Her night-long vigils as a 6-year-old child, staying up with her grandfather in defense of the family home as the Ku Klux Klan rampaged through the area killing black residents and burning black churches and houses.
•    A tense childhood encounter with a white boy that precipitated a harsh scolding and a difficult lesson in the reality of race relations.
•    Her longtime work for the NAACP investigating brutal crimes against African Americans in Alabama, taking testimony from victims unwilling to speak to others.
•    Her handwritten account of the moment she refused a bus driver’s order to give her seat to a white passenger.
•    Her reunion, 37 years later, with the white woman who offered Parks her own seat on the bus after she was ordered to give up hers.

The new 96-page book features more than 80 color and black and white images from the Parks Collection. It is available in paperback ($16.95) from the Library of Congress Shop, 10 First St. S.E., Washington, D.C., https://library-of-congress-shop.myshopify.com/ and from book retailers worldwide.

The exhibition, Rosa Parks: In Her Own Words, opened Dec. 5 and will be on view through summer 2020. The book and exhibition are part of an ongoing initiative inviting Library visitors to Explore America’s Changemakers through a series of exhibitions, events and programs. Another exhibition drawing from the Library’s collections explores the fight for women’s voting rights 100 years after the passage of the 19th Amendment.