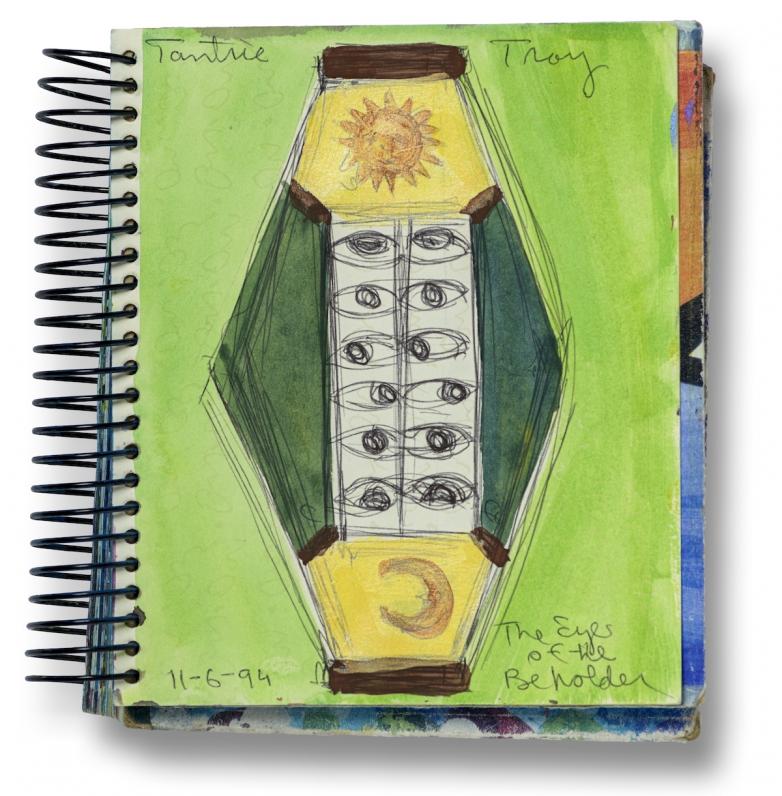 Betye Saar, sketch for Eyes of the Beholder, November 6, 1994. Watercolor and ballpoint pen on paper.

New York – The Morgan Library & Museum proudly announces a solo exhibition of work by the Los Angeles–based artist Betye Saar (b. 1926). Best known for incisive collages and assemblages that confront and reclaim racist images, Saar emerged in the 1960s as part of a wave of artists, many of them African American, who embraced the medium of assemblage. She went on to become one of the most significant artists working in this medium today. Opening at the Morgan on September 12, 2020 and running through January 31, 2021, Betye Saar: Call and Response is the first exhibition to focus on Saar’s sketchbooks and examine the relationship between her found objects, sketches, and finished works.

The daughter of a seamstress, and a printmaker by training, Saar brings to her work a remarkable sensitivity to materials, and she draws her imagery from popular culture, family history, and a wide range of spiritual traditions. Her creative process starts with a found object: a piece of leather, a cot, a tray, a birdcage, an ironing board. The objects she chooses are ordinary, used, and slightly debased—things most people would simply pass by. After identifying a primary object that calls to her, Saar surveys her stockpile of other found materials for use in combination. Once she h as arrived at a vision of the final work, she responds with a sketch in which she lays out her ideas for the finished work.

Saar has kept such sketchbooks throughout her career. She has also kept more elaborate travel sketchbooks containing exquisite watercolors and collages—often relating to leitmotifs seen across her oeuvre—from a lifetime of journeys worldwide. Betye Saar: Call and Response presents Saar’s sketches and corresponding assemblages alongside approximately a dozen of her travel sketchbooks. Selections cover a broad span of her career, from the 1970s through a sculptural installation made specifically for t his exhibition, in addition to collages from the Morgan’s collections that have never before been displayed.

Organized by the Los Angeles County Museum of Art (LACMA), the exhibition at the Morgan is coordinated by Dr. Rachel Federman, the Morgan’s Associate Curator of Modern and Contemporary Drawings. Federman said, “It’s an honor to present the work of Betye Saar, an artist I have long admired. By providing access to her sketchbooks, this exhibition will give visitors an unprecedented glimpse into Saar’s artistic practice.”

As an early champion of Saar's work, the Morgan acquired a series of six collages that will be displayed in full for the first time as part of this exhibition. A Secretary to the Spirits (1975) is the outcome of an invitation by author and activist Ishmael Reed (b. 1938) to create a series of collages for his poetry book of the same name. In another form of “call and response,” each of Saar’s collages is based on and named for one of Reed’s poems. Saar employed a layered approach to echo Reed’s poetry, which combines references to the ancient and the contemporary, the spiritual and the mundane.

The Morgan’s Director, Dr. Colin B. Bailey, said, “After a few somber months, we are excited to open our fall season with this incredible, poignant body of work by Betye Saar. Her assemblages, in combination with the tremendous creative repository of her notebooks, provide audiences with an opportunity to look closely at and consider the relationship between the found objects she uses, her sketches, and the completed works.”

The exhibition will be accompanied by an array of engaging public programs. Details will be announced soon.