The Morgan Library & Museum Announces Plans for a New Garden 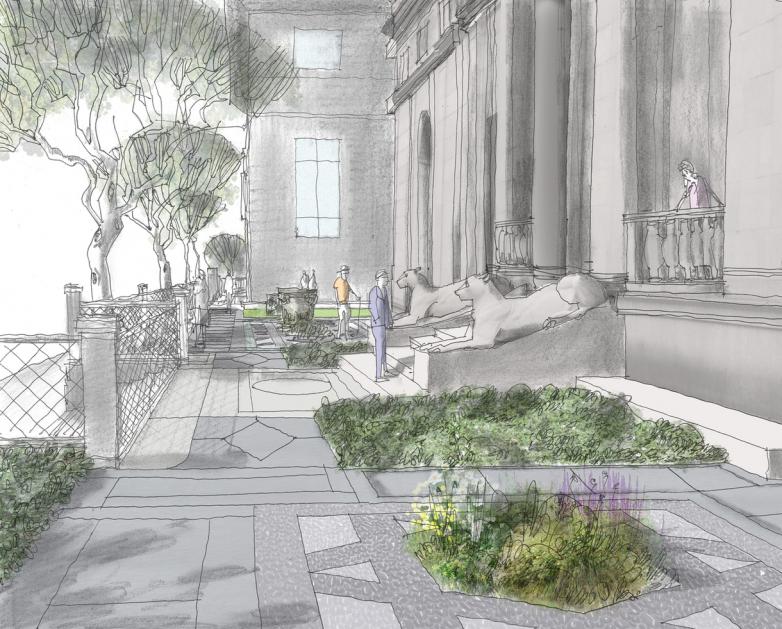 New York – The Morgan Library & Museum today announced site improvements to its 36th Street grounds as part of its four-year, $12.5 million project to restore and enhance the exterior of J. Pierpont Morgan’s Library. Developed by award-winning landscape designer Todd Longstaffe-Gowan and lighting designer Linnaea Tillett, the new garden and lighting will revitalize the southern section of the Morgan’s campus and provide visitor access to its grounds for the first time in the institution’s history.

The exterior restoration of J. Pierpont Morgan’s Library that is currently underway presents a unique opportunity to reimagine its setting. The existing landscaping—essentially a simple lawn—does little to complement the architecture of the Library, nor does it encourage visitor interaction with the landmark building’s exterior. By creating new spaces and opportunities for engagement and drawing attention to the site, the project will reinvigorate this portion of the Morgan’s campus, which was somewhat removed from visitors’ experience when the Morgan’s entrance shifted from 36th Street to Madison Avenue as part of the 2006 Renzo Piano–designed expansion.

The new plan will create an accessible route from the interior campus to the exterior of J. Pierpont Morgan’s Library, and an inviting space for tours and other programs. The low profile of the design respects and enhances the restrained façades of both the original Library and Renzo Piano’s addition. Paths of bluestone, set in patterns that derive from the Library’s floor and exterior paving, will provide a fully accessible surface for garden visitors. Limited use of elegant pebble work will add texture and visual variety to the ground plane.

The garden’s planting strategy includes an extension of existing groundcover, the introduction of beds of periwinkle flanking the Library’s loggia, and the addition of colorful, low-height herbaceous beds. The garden will also display several antiquities from the Morgan’s holdings that up until now have been inaccessible to the public. These include a large Roman sarcophagus, a Roman funerary stele, and a pair of Renaissance corbels.

Todd Longstaffe-Gowan has extensive experience designing and developing landscapes for some of the most distinguished sites in the United Kingdom, including Hampton Court and both Kensington and Kew Palaces, and his imaginative designs respect the spatial and historic significance of a site while enabling new functionality. The Morgan Library & Museum commission is the firm’s first in the United States.

“The new 36th Street garden is a significant part of the Morgan’s commitment to increasing public engagement with our historic original building and surrounding site,” said Director Colin B. Bailey. “The enhanced grounds will allow visitors and school groups to look closely at the fascinating exterior architectural and sculptural details of the Library. It is a privilege for us to be able to share such a significant architectural marvel with our community.”

The Morgan’s site improvements also include a lighting scheme by Tillett Lighting Design Associates that will enhance the building’s presence at night and accentuate both the architecture and the new garden.

The new lighting design will create an enchanting, moonlit nocturnal environment, which will sit in contrast to and mediate the ambient street lighting. J. Pierpont Morgan’s Library was originally commissioned as a private space, and the lighting will emphasize the domestic quality of the architecture. The design centers on the relighting of the historic lantern that hangs in the Library’s loggia, and spotlights that will gently highlight the building’s details and the garden’s antiquities and sculptures.

In combination, the comprehensive exterior restoration of J. Pierpont Morgan’s Library and the 36th Street improvements will bring new life to a magnificent library over one hundred years after its initial construction. The complete restoration and site enhancements will be unveiled to the public in fall 2020. The unveiling will be accompanied by an exhibition chronicling the history of the Library, as well as a scholarly publication that will be released in spring 2021.