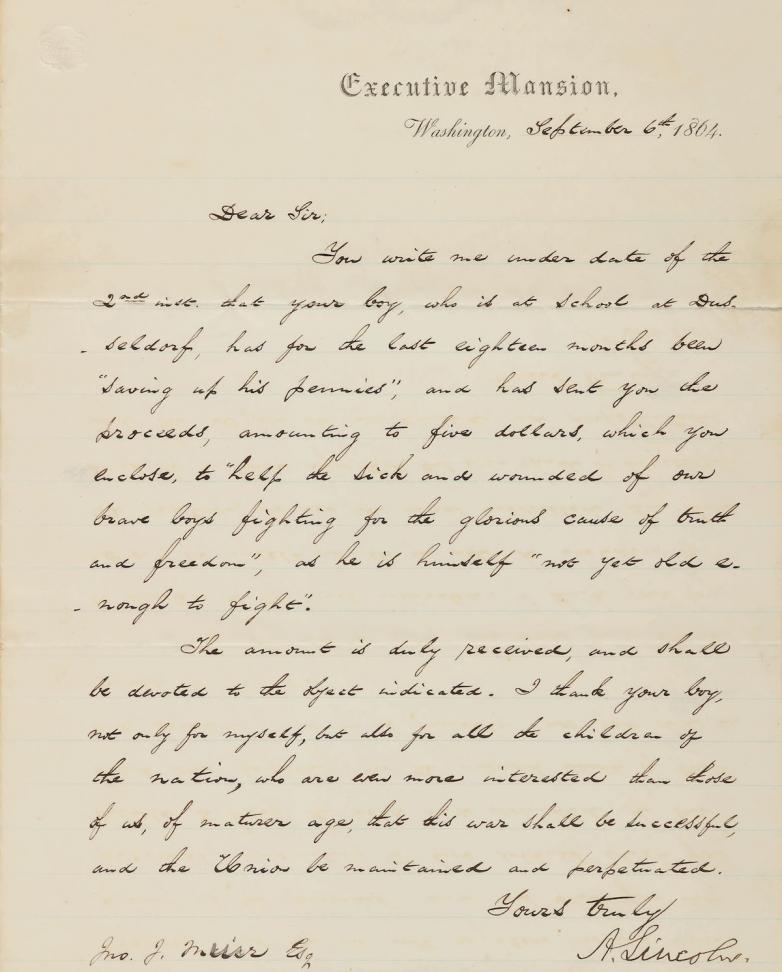 A momentous letter from Abraham Lincoln thanking a schoolboy, from the collection of Elsie and Philip Sang. Estimate: $700,000-1,000,000

New York – Sotheby’s is pleased to announce the full offerings from its online sales of American Manuscripts & other Property from the Collection of Elsie and Philip Sang, open for bidding through 14 October, and Fine Books and Manuscripts, Including Americana, open for bidding through 15 October. Highlights of works on offer will open for exhibition by appointment in Sotheby’s New York galleries.

The five-part sale of “Highly Important American Historical Documents, Autograph Letters, and Manuscripts” from the Elsie O. and Philip D. Sang Foundation, which extended from April 1978 to December 1981, was a watershed event in American collecting. This month, another group from the Sang Collection will appear at auction, featuring presidential letters and documents, first ladies, music, and a historical miscellany.

Philip Sang was a dedicated collector, always supported by his wife, Elsie, who developed a deep appreciation and understanding of the primary documents that filled their home. Sang graduated from the Illinois Institute of Technology and developed several business interests, particularly in pharmaceuticals. However, Sang relied on another business—Goldenrod Ice Cream—to ease his way into correspondence with the offices of various dignitaries, including several presidents.

The selection is led by a momentous Abraham Lincoln letter rediscovered – the President thanks a schoolboy on behalf of “all the children of the nation” for his efforts to ensure "that this war shall be successful, and the Union be maintained and perpetuated." (estimate $700/100,000). President Lincoln was remarkably accessible, and was inundated by letters, requests, and petitions. While most were dealt with by his small office staff, a letter from an immigrant in Brooklyn dated 2 September reached Lincoln’s desk, during his 1864 reelection campaign. The author of the letter, John J. Meier, proudly explained that three generations of his family supported Lincoln in his determination to end slavery and preserve the Union. Meier also referenced the Reverend Henry Ward Beecher’s antislavery Plymouth Church, which served as a station on the Underground Railroad and where Lincoln himself twice worshipped. Meier enclosed $5 on behalf of his son James, noting that he had been “saving up his pennies” in order that he might “help the sick and wounded of our brave boys, fighting for the glorious cause of truth and freedom” as he is “not yet old enough to fight.” Lincoln was famously indulgent of all children, and this letter from James Meier’s father must have appealed to him as it shared his own view that in the prosecution of the War, the preservation of the Union and the elimination of slavery were two sides of a single coin. Lincoln drafted a reply to thank the boy, which extensively quoted the boy’s original letter to his father, and the reply was sent to Meier, senior, on 6 September.

FINE BOOKS AND MANUSCRIPTS, INCLUDING AMERICANA

Bringing together rare and unique property across a range of subjects, including Americana, cartography, travel, and literature, the sale features two highly important pieces of Americana, led by an autograph letter signed by Richard Henry Lee—the congressional delegate who introduced the resolution that the American colonies “are, and of right ought to be, free and independent States … absolved from all allegiance to the British Crown”—to George Washington, informing him of his unanimous election in the Senate to the office of the Presidency (estimate $400/600,000). Dated 6 April 1789, Lee’s congratulatory missive he acknowledges George Washington's singular contribution to "render independent" the government that he is about to head. When the results of the Electoral College were tallied, Washington had secured a vote from every elector, and his fellow Virginian, Richard Henry Lee, hurriedly sent him this letter with the news. Washington's ambivalence about becoming the chief executive is well known, but it was belied by his willingness to serve. The very office of presidency owes much to the character of Washington – his fame as the steady hero of the Revolution, his manifest lack of personal ambition, and his determination not to profit from public service won him a reputation unapproached by any other American of his day.

Also on offer is a partially printed document signed, in which President Abraham Lincoln extends his blockade of Confederate ports to include Virginia and North Carolina (estimate $300/500,00). In this order to Secretary Seward to affix the Seal of the United States to his proclamation of the blockade, Lincoln deleted Maryland from the list of proscribed states – perhaps securing Maryland’s ostensible loyalty to the Union for the duration of the rebellion. The present document put the full blockade into effect and placed the Union at war with the Confederacy.