New York — Printed & Manuscript African Americana is on offer at Swann Galleries Thursday, March 25. The sale will feature an exceptional offering of material with highlights from important figures and historical movements, including Frederick Douglass; slavery and abolition; the Civil Rights Movement, with items relating to Dr. Martin Luther King, Jr.; and the Black Panthers. 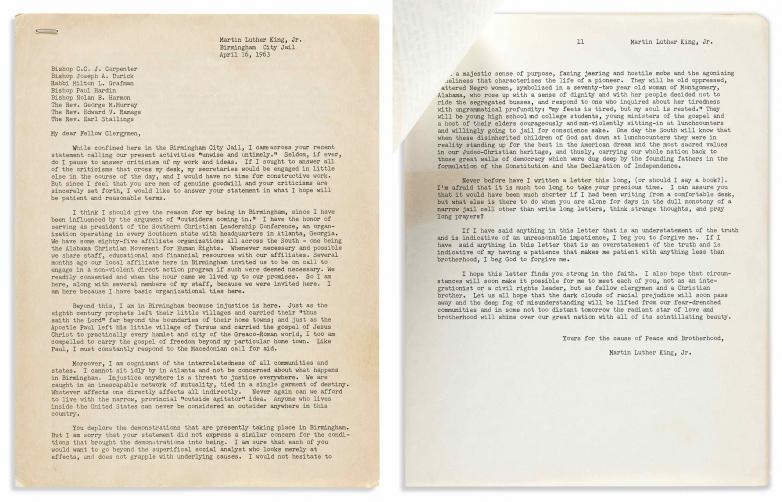 Frederick Douglass items stand out amongst an offering of material related to slavery and abolition. Highlights featuring Douglass include a scarce 1878 carte de visite portrait of the abolitionist by Samuel M. Fassett ($15,000-25,000); an early issue of Douglass’s newspaper The North Star, 1848 ($7,000-10,000); and an 1882 autograph letter signed to Martin I. Townsend concerning his rival Richard Greener ($5,000-7,500). Also of note a series of manuscript lectures by an abolitionist firebrand before, during and after the war ($3,000-4,000); a first edition of Narrative of Sojourner Truth, a Northern Slave, Emancipated from Bodily Servitude, 1850 ($1,500-2,000); and an 1868 elaborately engraved commemorative printing of the Thirteenth Amendment ($3,000-4,000).

Objects and ephemera relating to music and entertainment feature throughout the sale. A first printing of A Night-Club Map of Harlem featured in the inaugural issue of Manhattan: A Weekly for Wakeful New Yorkers, 1933 is on offer ($15,000-25,000). Dance and theater include a diary, photograph and correspondence of modern dance legend Katherine Dunham from 1935 to 2002 ($8,000-12,000); a group of circa-1957 photographs of the short-lived but influential New York Negro Ballet Company ($700-1,000); and a 1943 Playbill for an early performance of Othello signed by its star Paul Robeson ($1,200-1,800). Flyers for music festivals and concerts feature the original maquette for the 1982 Cultural Freebee Jam flyer held at the Bronx River Center to celebrate Black History Month ($7,000-10,000); and a poster for opening night of Run DMC’s 1986 Raising Hell tour ($2,500-3,500).

Black Panther material features a 1968 poster advertising a Free Huey Rally at Oakland Auditorium ($3,000-4,000); a group of 30 different Black Panther and Black Power pinbacks ($1,200-1,800); and Our Folk Tales: High John the Conqueror and Other Afro-American Tales, published by the Student Non-Violent Coordinating Committee and compiled by Julius Lester circa 1967 ($1,000-1,500).

On Monday, March 22 at 5 pm the house’s director of books and manuscripts, Rick Stattler, will be in conversation with Lisbet Tellefsen, a community archivist, collector, curator and publisher whose collections have been exhibited nationwide. To register for the event visit swanngalleries.com.

Limited previewing (by appointment only) will be available through March 24, to be scheduled directly with a specialist in advance and conforming to strict safety guidelines. Swann Galleries staff will prepare condition reports and provide additional photographs of material on request. Advance order bids can be placed with a specialist for the sale or on Swann’s website, and phone bidding will be available. Live online bidding platforms will be the Swann Galleries App, Invaluable, and Live Auctioneers. The complete catalogue and bidding information is available at www.swanngalleries.com and on the Swann Galleries App.