Military Collection of Bruce B. Hermann to be Auctioned at Hindman 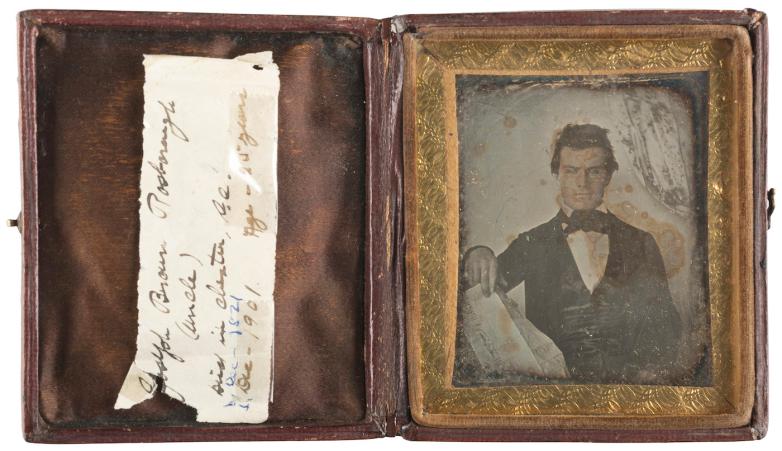 Part of the Rosborough family archive, which includes letters relating to the California Gold Rush, the Modoc War, the Klondike Gold Rush, and early settlement and mining interests.

Cincinnati, OH – The Civil War and American Militaria Collection of Bruce B. Hermann, an internationally renowned specialist in military antiques, will highlight Hindman’s June 21st to 22nd American Historical Ephemera and Photography Auction. With an extensive background in American and Western European military history, Hermann has more than 30 years of experience collecting and dealing in 16th to 20th century militaria. Hermann also served as an appraiser on the PBS series The Antiques Roadshow for 11 seasons. The sale offers bidders an especially rare opportunity to compete on a wide breadth of exceptional historical items that represent Hermann’s passion for history and American militaria.

“The collection [Bruce] has amassed is absolutely one of the finest around with great emphasis on authenticity, rarity and quality,” shared military painter, scholar, and collector Don Troiani. “It is indeed a rare and thrilling occasion when a collection such as this hits the auction block. To the serious collector this will be a once in a lifetime opportunity particularly in the headgear and uniforms categories.”

The auction will lead with a session on June 21 that spans nearly three centuries of American history, including the Revolutionary War, the Civil War, Indian Wars, westward expansion, abolition, and women’s suffrage.

The first session of the auction will also capture a wide swath of American history, containing nearly 300 lots representing many significant moments and figures in our nation’s history. From the Revolutionary War, the Civil War, Indian Wars, and westward expansion, to abolition and women’s suffrage, the auction has something that will appeal to all history enthusiasts.

A strong selection of 19th century photography, including Civil War images are among the most anticipated lots in the first session of the sale. Most noteworthy is a half plate tintype showing Company D, 2nd Tennessee Cavalry Regiment in the field (lot 37; estimate: $3,000-4,000).

A robust selection of letters and manuscripts will also be featured. Highlights include an autograph letter signed by George Armstrong Custer to Captain George Yates, 7th Cavalry, Fort Yates, Dakota Territory, 11 June 1871, from the Forrest Fenn Collection (lot 183; estimate: $6,000-8,000) and the Rosborough family archive, including letters relating to the California Gold Rush, the Modoc War, the Klondike Gold Rush, and early settlement and mining interests in Idaho, Nevada, and Texas (lot 246; estimate: $15,000-25,000). Items signed by George Washington, Abraham Lincoln, and Susan B. Anthony will also be among highlights.