Marx, Tesla Among Autographs & Artifacts Up for Auction 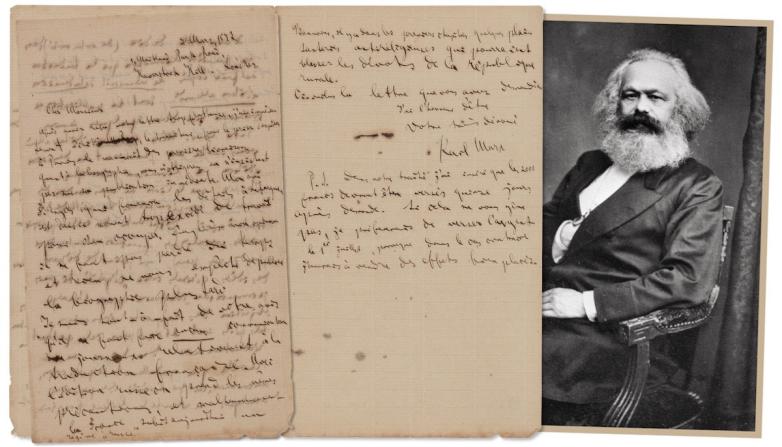 1872 letter by Karl Marx on the French edition of Das Kapital.

Among the important autographs in the sale is a letter by Karl Marx about the French edition of Das Kapital. The rare and important three-page letter in French, dated March 7, 1872. Handwritten letter to the publisher Maurice Lachâtre. In 1872, Lachâtre published the first book of Marx's Das Kapital in French-Le Capital, translated by Joseph Roy but edited by Marx himself. Marx's letters are incredibly scarce, and as this example is associated with the publication of his most important work, it is of the utmost desirability. (Estimate: $300,000+)

A letter by Nikola Tesla about the possibility of extraterrestrial life and his detection of "feeble impulses emanating from Mars.” The fascinating one-page handwritten letter on vellum parchment to Universal Pictures co-founder Carl Laemmle. A unique and important autograph letter by the celebrated inventor, whose eccentric ways and marvelous mind doubtlessly inspired some of 'mad scientist' characters brought to the screen by Laemmle in the 1920s and 30s. (Estimate: $200,000+)

A choice fully signed Beatles Fan Club promo card. The stunning vintage circa late 1963— early 1964 official Beatles Fan Club promo card depicting Dezo Hoffmann's image of the group seated in their collarless suits. This is one of the finest examples we have seen, signed just weeks before the Beatles legendary appearance on the Ed Sullivan Show in NYC, followed by their historic first U.S. tour. (Estimate: $20,000+)

And significant handwritten letters by Mohandas Gandhi. The important one-page letter in Gujarati, September 3, 1930. A handwritten letter sent from Yerwada prison in Poona, addressed to his friend's wife, Dr. Behram Navroji Khambatta, which demonstrates Gandhi's philosophy of resistance and the spiritual foundations from which it emanated. (Estimate: $15,000+)

Along with rare signed documents from Paul Gauguin that include; a Gauguin letter while in French Polynesia, acknowledging payment from art dealer Vollard (Estimate: $15,000+), a Gauguin handwritten letter to Brigadier Claverie, written from his final home in Atuona, Hiva Oa, French Polynesia, interceding on behalf of the indigenous peoples of Anaiapa in a judicial matter (Estimate: $15,000+), and Malcolm X letter written from prison after his conversion to Islam. As a detailed letter offering great insight into his early life of 'sin,' and his clear desire for repentance, this rare early example of his adopted "Malcolm X" name renders this a significant and immensely desirable piece. (Estimate: $12,000+)

Top artifacts include American diplomat Ellsworth Bunker's Presidential Medal of Freedom with Distinction, a plate from Thomas Jefferson's White House china service, and a brooch gifted by Jacqueline Kennedy to her secretary.

The Fine Autograph and Artifacts auction from RR Auction began February 18 will conclude on March 9. For more information, go to www.rrauction.com.