Manuscript on Archery by Yorkshire Landowner Comes to Sale 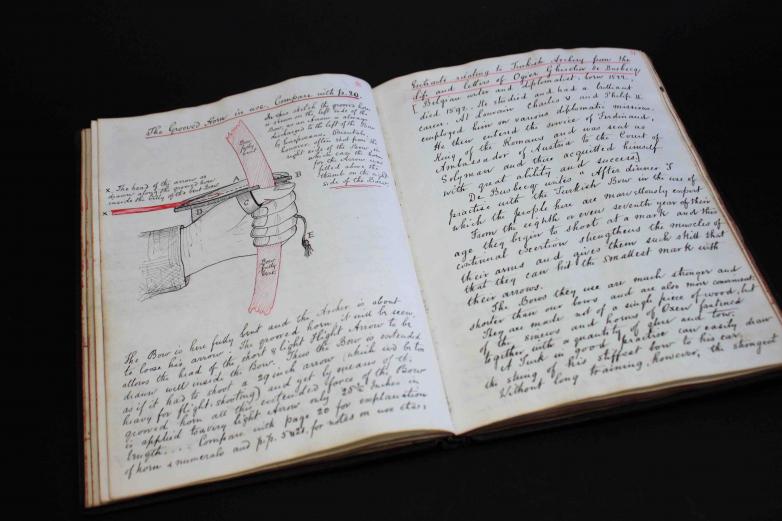 Leyburn, North Yorkshire  — An outstanding manuscript on archery, compiled by Sir Ralph Payne Gallwey of Thirkleby Park, Thirsk, North Yorkshire, is coming up for sale at Tennants Auctioneers in its Book Sale on 18th March.

Sir Ralph Payne Gallwey (1848-1916), it appears, was a man with an extraordinary fascination for archery. Written in the first decade of the 20th century, the beautifully compiled manuscript tells of his research into Turkish and Chinese archery, a wide variety of bows and arrows, and methods of shooting. Payne Gallwey’s research was practical, and tables of flight distances, detailed illustrations and photographs of bows in use accompany meticulous hand-written notes. The manuscript also includes photographs of the extraordinary collection of weapons housed at Thirkleby Park.

Payne Gallwey lived at Thirkleby Park; he inherited the estate in 1881, but after the death of his son, William, in the First World War, he tried to sell the estate at auction. It failed to sell, and Payne Gallwey died shortly afterwards. The main house, Thirkleby Hall, was demolished in 1927, and only the gatehouse and stable buildings remain. Payne Gallwey was an engineer, historian, artist and ballistics expert, who was a published author on several books on shooting and the crossbow.

The manuscript, which is on offer with an estimate of £600-800 plus buyer’s premium, is an extraordinary record of an enquiring mind.

Details of the manuscript can be found at www.tennants.co.uk.