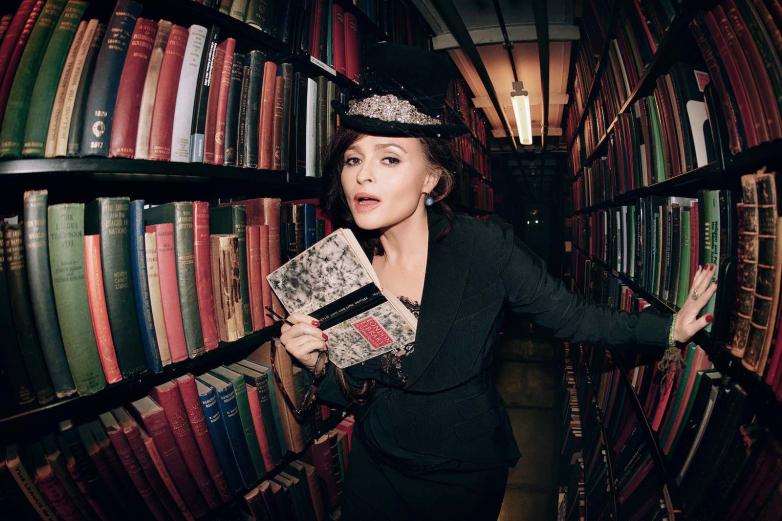 The London Library is delighted to announce Helena Bonham Carter CBE as its first female President. Proposed by the Library’s Trustees, the appointment was formally confirmed by members at the Annual General Meeting on 15 November 2022, also marking the end of incumbent President, Sir Tim Rice’s five-year term.

The new President has been a Library member since 1986 and has been chosen for her creativity and connections with literature and stories, her high profile and potential to advocate among new audiences.

Bonham Carter has a passion for books and deeply appreciates the importance of writers to the acting profession. Much of her own career links with London Library members who have drawn on the Library’s rich cultural heritage, extensive resources and unparalleled atmosphere. She rose to prominence by playing Lucy Honeychurch in the film adaptation of the novel A Room with a View (1985), written by former Library Vice President E.M. Forster. Later, she played Miss Havisham in Great Expectations (2012), Charles Dickens was a founding member of the Library, and more recently Eudoria Holmes in the Enola Holmes films based on characters created by Library member Arthur Conan Doyle.

Open to all, the Library has had innumerable female artists, writers and thinkers in membership throughout its 181-year history. Early members included pioneering women such as social theorist, Harriet Martineau, suffragette, Christabel Pankhurst and the first woman to qualifiy in Britain and a physician and surgeon, Elizabeth Garrett Anderson. Great writers in membership have included Virginia Woolf, Angela Carter, Daphne du Maurier, Muriel Spark and Beryl Bainbridge, and other creatives such as actress, Diana Rigg, and artist, Vanessa Bell.

The Library Presidency is an honorary position with fundraising and advocacy at its core; the Library is a charity that receives no regular public funding. Bonham Carter’s first major duty will be to host The Library’s Christmas Party but she is particularly interested in the Library’s highly regarded Emerging Writers Programme, its growing schools programme, and the Library’s various types of supported membership for those unable to meet the full annual fee.

The Library is a world-class centre of creativity and inspiration. Around 700 books are published each year by Library members, and over 460 film scripts, TV screenplays or theatre scripts are also produced by Library members annually, estimating an annual value of £21.3m generated for the UK economy (Nordicity and Chartered Accountants Saffrey Champness Impact Report, 2020).

Helena Bonham Carter CBE, said: “I am delighted to become The London Library’s first female President and to champion an institution that is open to all. The Library is truly a place like no other, inspiring and supporting writers for over 180 years, many of whom have in some way informed my own career and those of actors everywhere. The Library’s unique resources, history and membership help to connect the literary greats of the past with those of the future, and I am proud to support this incredible and vital establishment.”

Philip Marshall, Director of The London Library said: ‘We are all thrilled to welcome Helena Bonham Carter as our new President. With a passion for books and stories, and a long-standing love of the Library, Helena is ideally placed to promote this tremendous resource for the creative and curious.’