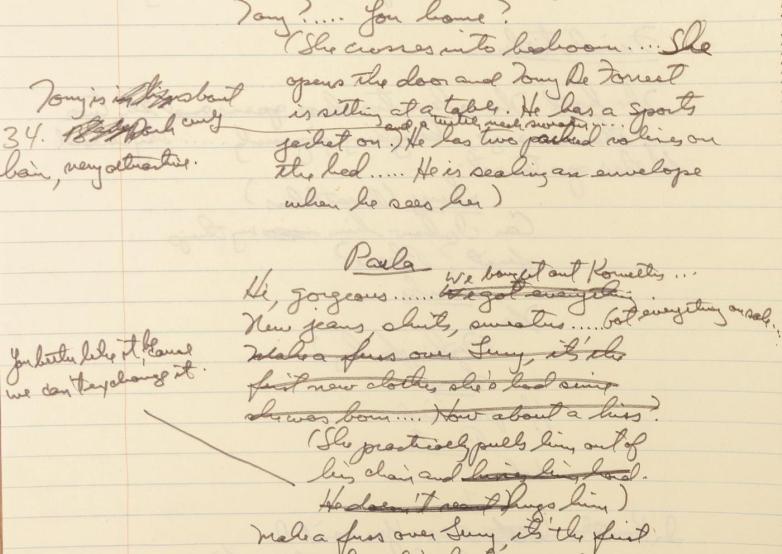 Washington, DC -- The Library of Congress has acquired the manuscripts and papers of playwright and screenwriter Neil Simon, the most commercially successful American playwright of the 20th century.

The donation will be announced at a special event with actors Matthew Broderick and Sarah Jessica Parker, and Elaine Joyce, actor and Simon’s widow, Monday night at the Library.

“Neil Simon’s work has left an undeniable mark on American culture and theater,” said Librarian of Congress Carla Hayden. “The donation of Simon’s papers to our nation’s library is a treasured addition to our holdings that enhances our performing arts collection as one of the best in the world. It also ensures Simon’s legacy is preserved for generations to come.”

The collection includes approximately 7,700 items documenting Simon’s creative process and life. The materials range from hundreds of scripts, notes and outlines for his plays, including handwritten first drafts and multiple drafts of typescripts, documenting the evolution of his shows. It contains papers from Simon’s most celebrated plays, including Barefoot in the Park, The Sunshine Boys, Brighton Beach Memoirs, and Lost in Yonkers.
The donation also includes materials from the 25 screenplays Simon wrote during his career, including The Prisoner of Second Avenue, The Heartbreak Kid, and The Goodbye Girl, in addition to several scripts for shows never completed or produced, such as one titled The Merry Widows, written for Bette Midler and Whoopi Goldberg.

Beyond Simon’s typed scripts, materials in the collection include his Pulitzer Prize, a Tony Award, dozens of personal notebooks, notes and drafts of letters and speeches. In addition, there are photographs, programs, clippings, original posters and signed baseballs (Simon was a noted fan).

A few highlights of the collection include:
•    Dozens of notebooks, full of Simon’s tight scrawl. Some are clearly first drafts written in his study, while others were likely notes scribbled in the back of darkened theaters, including changes, additions and notes for the actors or director, inspired by what he saw on stage during rehearsals.
•    A yellowing first act of Barefoot in the Park. Sixty years old now, it wasn’t Simon’s first Broadway show, but it was, perhaps one that marks the beginning of his unequaled track record. It was also the first appearance on Broadway of a then unknown actor, Robert Redford.
•    Perhaps the most surprising discovery in the collection has been over a dozen notepads filled with watercolors, drawings and cartoons by Simon.

Simon began his career in the 1950s writing for radio and television, famously for Sid Caesar’s Your Show of Shows. By the end of his career, Simon had 30 new shows open on Broadway, not including revivals. While Simon was known for writing comedies, he took on increasingly serious subjects, including the 1991 play Lost in Yonkers, which received the Pulitzer Prize for drama. Simon was nominated for an unprecedented 14 Tony Awards throughout his career and won three, in addition to a special prize for contribution to the theatre. He died in 2018 in New York City.

The papers of Neil Simon join those of other prolific Broadway playwrights held in the Library’s performing arts collections, such as the Arthur Laurents Collection, the screenwriter and playwright whose films include The Way We Were, The Turning Point, and writer of the librettos for the musicals West Side Story and Gypsy. The Library also holds the Marvin Hamlisch Collection; Hamlisch and Simon collaborated on the musicals They’re Playing Our Song and The Goodbye Girl. The papers of Bob Fosse and Gwen Verdon, close friends of Simon’s and his collaborators for the musical Sweet Charity, are also housed in the Library’s collection.

The Music Division at the Library of Congress — formally established in 1897 within the Library’s Jefferson Building upon its completion — traces the origin of its collections to the 13 books on music literature and theory in Thomas Jefferson’s library, purchased by Congress in 1815. Today, the division’s collections number close to 25 million items, including the manuscripts and papers of hundreds of composers, lyricists, playwrights, screenwriters, performers, musicians, directors, designers and choreographers, in addition to music and book collections, microforms and copyright deposits.