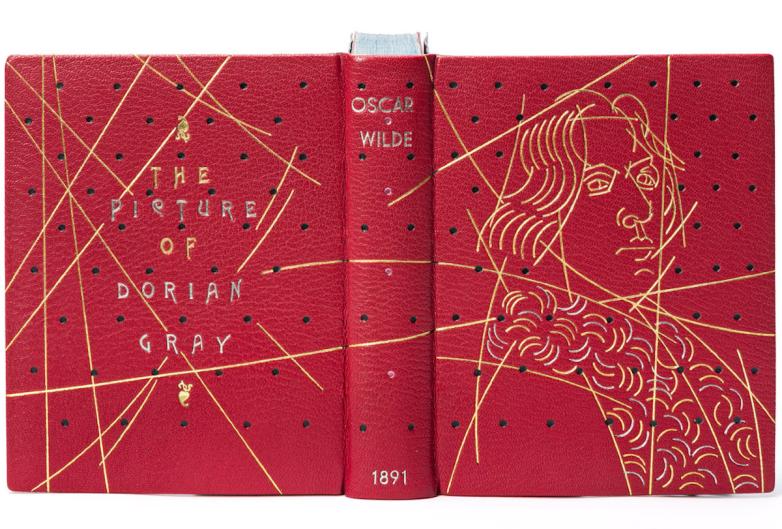 Additional literary material includes a signed and inscribed first edition of Tennessee Williams’ Grand, 1964 ($500-700), a 1990 autograph note signed by Allen Ginsberg ($100-200), and a first edition of Nazi persecuted sexologist Magnus Hirschfeld’s turn-of-the-century work Jahrbuch, bound in ten volumes ($800-1,200), alongside a selection of gay and lesbian pulp fiction novels from the 1950s and 1960s, photographs of Walt Whitman, and selection of early printed and twentieth-century titles.

Continuing the success of Tom of Finland in the house’s previous sales is a run of original illustrations and ephemera by the artist. Of note is Portrait of Eric, a 1985 graphite-on-paper work together with two autograph letters addressed to the person who commissioned the drawing ($20,000-30,000); and two graphite preparatory drawings from the last 1960s and the late 1980s ($7,000-10,000, each); as well as a selection of prints. Tom of Finland-related ephemera features flyers and posters illustrated by Finland for Tom’s Saloon, the famous Hamburg fetish and leather bar ($600-900), Los Angeles’ Falcon’s Lair ($700-1,000), and the fourth annual review for the American Uniform Association ($1,500-2,500); additional items include Tom of Finland temporary tattoos for the 1980s ($100-150) and a vintage t-shirt and swim trunks set from the 1990s ($150-250). The auction also features several works by artists associated with or influenced by Tom of Finland: including Sadao Hasegawa, George Quaintance, Jim French, and Rex and Etienne.

Vernacular photographs, ephemera celebrating LGBTQ+ life and historical material from the early years of the gay liberation movement in the United States through the AIDS epidemic feature throughout the auction. Highlights include a placard from the 1969 Annual Reminder day held in front of Philadelphia’s Independence Hall that reads “Homosexuals are American Citizens Too” ($4,000-6,000); pamphlets and periodicals including 12 issues of Gay Flames circa 1970 ($400-600), five issues of the Slovenian quarterly Lesbo Magazine from 1997 to 1999 ($500-750), and a small archive from an unnamed lesbian activist featuring material related to second-wave feminism, women’s liberation, and pro-lesbian political and artistic works and publications ($800-1,200); and from the collection of Silence=Death Collective founder Chris Lione is a rare first printing of Silence=Death before the image was turned over to ACT UP ($15,000-20,000), alongside sketches for the Silence=Death design by original Collective member Oliver Johnston, consigned by the organization ($1,500-2,000).

A portion of the sale will benefit The Lesbian Herstory Archives. Founded in the 1970s, the archives’ mission is to gather and preserve records of lesbian lives and activities so that future generations will have ready access to materials relevant to their lives.