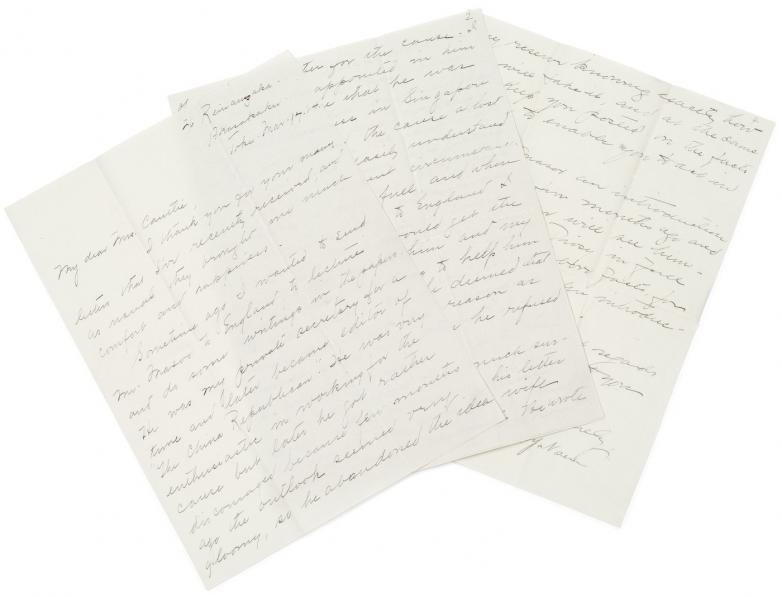 London – Known as one of the greatest Chinese leaders, Sun Yat-sen (1866-1925) played a pivotal role in the overthrow of the Qing dynasty in 1911 and the ensuing power struggles between rival factions. In the process he experienced years of constant struggle both in and out of China, from which he was frequently exiled. Two rare handwritten letters in English from Sun Yat-sen to his closest European friends and allies James and Mabel Cantlie are to be offered at Bonhams Rare Books and Manuscripts sale in London on Wednesday 15 September. Dated ‘November 1911’ and ‘March 1914’, they are estimated at £30,000-50,000 and £40,000-60,000 respectively. The sale also includes a signed portrait of Sun by H.T. Thompson, estimated at £8,000-12,000.

Sun Yat-sen met Dr (later Sir) James Cantlie while studying to become a doctor in Hong Kong in the early 1890s. Cantlie had arrived in the then British Colony in 1887 and helped to establish the Hong Kong College of Medicine for Chinese, the forerunner of the University of Hong Kong. Sun was one of his first pupils and they, together with James’s wife Mabel, remained very close friends for the rest of their lives. It was Cantlie’s tireless efforts which secured Sun’s release after he was captured in London in 1896 and locked up for several days in the Chinese Legation (now the Chinese Embassy).

The earlier of the two letters is dated 8 November 1911 and was sent from the RMS Adriatic which Sun had boarded in New York. He had been living in exile in America seeking support to end Imperial rule in China and was motivated to leave by the success of Huang Xing’s second military uprising in Wuchang the previous month. The letter announces that he is on his way to London but enjoins the Cantlies to keep the news to themselves. “Please keep my movements strictly secret for it is very important to our cause.” Sun spent a month in London trying unsuccessfully to raise money for the new republic before returning to China where he briefly held the position of Provisional President of the Republic of China.

The second later letter dates from 17 March 1914. It was written in Tokyo during Sun’s second period of exile in Japan. Sun and the Kuomintang (KMT) military forces had tried to overthrow the President Yuan Shikai, but the government had prevailed, the KMT was disbanded, and Sun was forced to flee. The letter, addressed to Mabel Cantlie, refers specially to ‘Mr Fraser’ – code for Sun’s former private secretary and editor of the English-language journal The China Republican – Ma Su. It appeared that having abandoned the cause as hopeless, Ma Su had had a change of heart and was on his way to London. Sun asks Mabel, “Will you please render him the friendly support if you think he is still loyal to the cause. I am writing you these confidential facts about my former Secretary and without any reserve knowing exactly how you will take it.” (Ma Su did indeed return to the KMT fold and represented Sun in the USA for several years).

Bonhams Senior Books and Manuscripts specialist, Simon Roberts, said, “Letters from Sun Yat-sen very rarely appear at auction and these two examples are particularly interesting, dating as they do from critical moment in Sun’s peripatetic and often difficult life.  At the time of the second letter in 1914, Sun was beginning to develop his vision of China as the world’s first socialist republic which was to earn him the reputation as one of the greatest Chinese leaders. His passion and fixity of purpose shine through these letters as does the deep bond of friendship and trust between Sun and the Cantlies who clearly shared his political aspirations for reform in China at that time, and were willing to do whatever they could to help.”