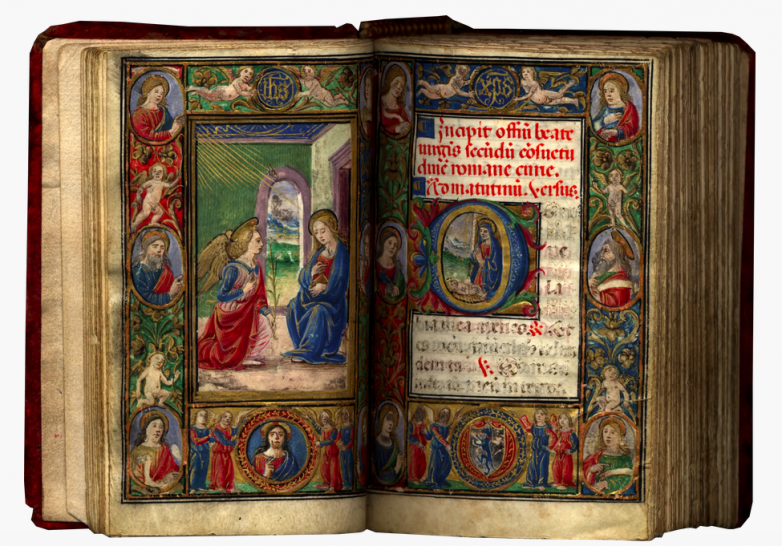 The Calcagni Hours (Use of Rome) in Latin, illuminated manuscript on parchment. Florence, 1508. Price: $95,000

New York — Les Enluminures will be exhibiting a variety of art works at the Winter Show, January 24 to February 2, including illuminated manuscripts, sculpture, works of art, and medieval and Renaissance jewelry.

llluminated manuscript leaves and cuttings exhibited at the show include a sparkling example by Attavante degli Attavanti, a High Renaissance artist who worked side-by-side important panel painters in Florence for the Medici court. Here the illuminator depicts two warrior saints, Sergius and Bacchus, in an initial A from a Choir Book. Once belonging to a former curator of the Louvre, Paul Durrieu, this illumination has a sterling provenance and validates Va-sari's praise of Attavante in his "Lives of the Painters" as one of the most "celebrated and famous of miniaturists.”

The same artist, or his active workshop, was responsible for a diminutive Book of Hours with a stunning sequence of pictures made for the Calcagni family in Florence and dated 1508. Numerous Books of Hours survive as captivating artistic expressions of daily medieval life, but dated Books of Hours associated with known patrons are rare. ln the case of the Calcagni Hours, archival research on the family evokes the small elite world of Florence during the period: Michelangelo and the papal secretary corresponded about the Calcagni properties, which they hoped to purchase in order to suppress the family's participation in a project they opposed.

ln the Middle Ages, as today, public areas in civic centers often mounted Christmas tableau of the Nativity story. Les Enluminures is bringing two such sculptures from Lombardy. Entirely unique, they depict the Ox and the Ass from the Nativity story sculpted by the De Donati brothers, artists active for the princely Sforza family. With original polychrome (although the ox has restored horns), the pair of animals are ubiquitous in Christmas scenes of the Nativity and are lauded in many more recent Christmas carols: "the ox and ass before him bow, and he is in the manger now; Christ is born today."

Another work of art highlighted at the show is a Gothie box, "a mysterious coffret" as the current exhibition in Paris calls it. This is an interesting example, not only because of the rare image by Jean d'Ypres of Saint Roch, who protected against the plague, but because of the typology of the Coffer, which is distinctive from others in the group. Recent research confirms the unique importance of these prints for a reconstruction of the early history of the graphic arts in France, but also reveals that the boxes themselves must have served to carry manuscripts along with other precious devotional objects. Representative of a new generation of French artists, Jean d'Ypres tried his hand at a variety of media in addition to these prints, images in printed Books of Hours, stained glass, and ivories, he was also responsible for the designs of the famous Unicorn Tapestries.

Founded by Dr. Sandra Hindman more than twenty-five years ago and with locations in Paris, Chicago, and New York, Les Enluminures has forged long-standing relationships with major museums and prestigious private collections throughout the world. lt exhibits at TEFAF Maastricht, Masterpiece, and Frieze Masters. The gallery is well-known for the level of its scholarship but also for the diversity, high quality, and provenance of the works it offers for sale.

Sandra Hindman states: "We are delighted to be returning once again to the Winter Show, which has consistently been one of our most successful venues. We look forward to this year with much enthusiasm."