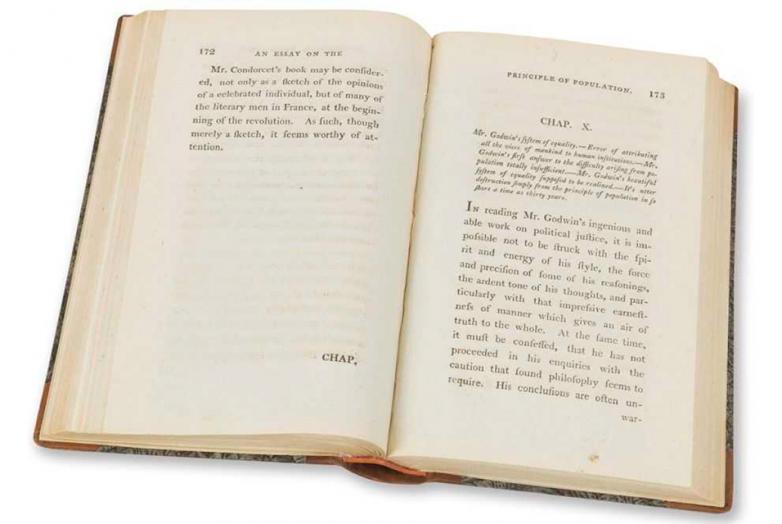 Hamburg, Germany — At the moment the exponential curve is on the tip of everyone's tongue. However, Thomas Robert Malthus explained this important principle in his acclaimed essay on the growth of population as early as in the 18th century. This milestone in modern economics is just one of many sought-after object in the Rare Books Auction. The exponential growth in anticipation of the sale had been prolonged, as the current COVID-19 situation required a six week delay of the auction date. The auction has now been scheduled for July 6. The sale will be held in due consideration of all required distancing and protection measures. Consignments will be accepted until mid May.

INFLUENTIAL: The very rare edition of the important classic An essay on the principle of population, as it affects the future improvement of society by Thomas Robert Malthus is the first factually justified treatise on population growth and its social and economic consequences. The first work to seriously caution against the perils of an exponential growth had great impact on later thinkers like Charles Darwin, John Stuart Mill and Karl Marx. It will be called up with an estimate price of € 60,000.

GLOBAL: The same estimate of € 60,000 is tagged to Civitates orbis terrrarum und Urbium praecipuarum. The lavishly made six volume strong work by the theologian and publisher Georg Braun can be considered a fascinating addition to the famous world atlas Theatrum Orbis Terrarum by the Dutchman Abraham Ortelius. Together with the engraver Frans Hogenberg, who had made various maps by Abraham Ortelius in earlier projects, he realized more than 600 true-to-life city views and maps on a total of around 1,600 pages between 1572 and 1618. They show views of all large and then relevant cities in Europe, Africa, Asia and America.

ILLUMINATED: With the Latin Book of Hours for the use of Troyes, made in France around 1480, a complete and richly illuminated Livre d'Heures from the Champagne region will be called up. The fine borders are teeming with fanciful grotesques and delightful birds. It is estimated at € 30,000.

FEUDAL: Gustav Klimt's only monograph, published during his lifetime, was made in form of a rare and lavishly printed portfolio under the direction of the artist from 1908 to 1914. It is a tremendously extravagant overview of works by the acclaimed representative of the Vienna Secession. The estimate is at € 25,000.

WORLD-FAMOUS: A complete first edition of Hartmann Schedel's prestigious Liber chronicarum will enter the race with the same estimate of € 25,000. The most comprehensive book project of its time is one of the most richly illuminated incunabula of all.

SURREAL: The first edition of the important catalog Le surréalisme en 1947 by André Breton with a total of 25 works by Marcel Duchamp is a contemporary document that "is both a visual and haptic demonstration object of Surrealism" (Lang). This masterpiece of book art is estimated at € 16,000.

LIBERAL: Fernand Léger's painters book with Paul Éluard's poem Liberté j'écris ton nom is an homage to freedom. During the German occupation of France, Paul Éluard expressed his yearning for freedom with this poem in 1942. Shortly after his death it inspired his friend Fernand Léger to make these joyful and gaudy illustrations that were released in an edition of just 200 signed copies in 1953. The bidding race for this colorful work in Leporello fold will be opened with an estimate price of € 15,000.

EXPLORATIVE: The Russian travelogue Puteshestvie Kapitana Billingsa (The Voyage of Captain Billings through Chukchi Country) from 1811 by the navigator and admiral Gavril Andreewich Sarychev may be available for € 10,000. It delivers account of the journey of Captain Billings to the northern Siberian Chukchi people and is one of the very rare complete copies of the first edition with the precious map of the Bering Strait. The work is part of a rich private collection of more than 100 books about journeys and expeditions to the polar region from the 16th to the 20th century, among them works by Olaus Magnus, Adam J. von Krusenstern, William Edward Parry and John Ross.

CRITICAL: The second revised edition of the monumental political work Das Kapital by Karl Marx will be called up in form of a very rare dedication copy for "Mr. Coelho". Compared to the first edition from 1867, this edition from 1872 was thoroughly revised by Marx and increased with numerous additions. The significant copy must have been dedicated to the Portuguese philologist and educational reformist Francisco Adolfo Coelho (1847-1919), who was part of a group of young Portuguese intellectuals with a fancy for the revolutionary tendencies of those days. Together they pursued the goal of changing Portugal's path in science and culture. However, a little capital will be necessary to acquire this fascinating copy with its moderate estimate of € 10,000.

FINALLY, the range of offers is completed by a Luther Bible in Low German and old coloring from 1574 (estimate: € 20,000), as well as by the first edition of Johann Wolfgang von Goethe's drama "Götz von Berlichingen" from 1773 and a decorative complete copy of Friedrich Bertuch's famous twelve volume strong Children's Encyclopedia which was released from 1798 to 1830 under the title Bilderbuch für Kinder (both estimated at € 8,000).