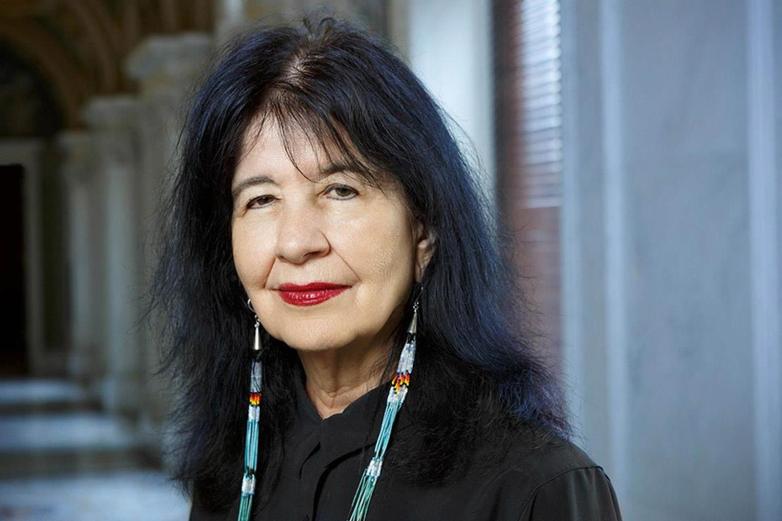 The Association of Tribal Archives, Libraries, and Museums has presented one of its Guardians of Culture and Lifeways International Awards to the Library of Congress and former U.S. Poet Laureate Joy Harjo for Living Nations, Living Words, Harjo’s signature project as the nation’s first Native American poet laureate between 2019 and 2022.

Harjo’s project was honored with the Outstanding Project/Non-Native Organization Award. The project features a sampling of work by 47 Native American poets through an interactive Story Map and a newly developed Library of Congress audio collection. Each location marker reveals a Native poet and features an image, biography and link to hear the poet recite and comment on an original poem.

"For my signature project as the 23rd Poet Laureate Consultant in Poetry, I conceived the idea of mapping the U.S. with Native Nations poets and poems,” said Joy Harjo, an enrolled member of the Muscogee Nation. “I want this map to counter damaging false assumptions — that Indigenous peoples of our country are often invisible or are not seen as human. You will not find us fairly represented, if at all, in the cultural storytelling of America, and nearly nonexistent in the American book of poetry."

As part of the Living Nations, Living Words project, Harjo edited a companion anthology of participating Native poets. It was published in 2021 by W. W. Norton & Company in association with the Library of Congress. Harjo also edited When the Light of the World Was Subdued, Our Songs Came Through: A Norton Anthology of Native Nations Poetry, published by W. W. Norton & Company in 2020.

During its annual conference on October 26, the Association of Tribal Archives, Libraries, and Museums presented the award, saying it “applauds Harjo’s work to illuminate the poetry of Native America and expresses its gratitude to the Library of Congress for a living tribute to a vibrant culture.”

Accepting the award alongside Harjo was Lori Pourier, president of the First Peoples Fund and member of the Board of Trustees for the American Folklife Center at the Library of Congress. Pourier (Oglala Lakota), an enrolled member of the Oglala Sioux Tribe, represented the Library at the ceremony and offered remarks on behalf of Librarian of Congress Carla Hayden.

The Guardians of Culture and Lifeways International Awards Program identifies and recognizes organizations and individuals that serve asoutstanding examples of how Indigenous archives, libraries, museums andindividuals contribute to the vitality and cultural sovereignty of Native Nations. The Guardian Award takes its name from the sculpture that stands atop the Oklahoma State Capitol — the work of Seminole Chief Kelly Haney.