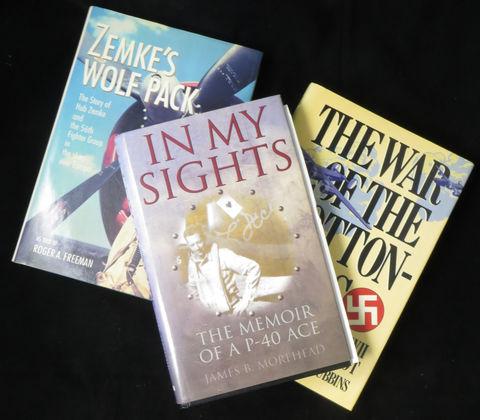 Courtesy of Over & Above Online Auctions

A selection of books from the John R. Elliott library of World War II books.

Timonium, Maryland — For nearly sixty years John R Elliott assembled a private library of books, artwork, photographs and memorabilia associated with “The Last Good War”.  Throughout these decades he amassed a library of more than 2,000 books, dozens of signed lithographs and photographs, trench art, relics, virtually every classic movie on the subject, glassware and giveaways, and more items into what is one of the most comprehensive, if not the most comprehensive, collection of information on the war ever held in a private collection. More than half of his books have been signed by the heroes from the war, and frequently by others as well. Many were published in very limited editions and some are mementos from reunions.

His special interests included the famed B-17 bomber, the US Army Air Corps, the bombing of Pearl Harbor, D-Day and the invasion of Normandy, the war in the European theater, submariners and their ships – all of which are chronicled in his library.  Though he held the Nazis and Japanese invaders in at least minimal disdain, the library also includes medals, arm bands, Nazi and Kamikaze flags, some books and artwork, and even coasters and champagne glasses once owned by Nazi General Herman Goering which were “rescued” from Hitler’s “Eagles Nest” estate.

His dedication to learning all that could be learned about the war led him to meeting many of these heroes, calling them on the telephone and such things as personally arranging a book signing for Medal of Honor recipient Admiral Eugene Fluckey with whom he became fast friends.  He was proud to have reached former President Dwight D. Eisenhower at Camp David where he was greeted by the President asking him “How did you get this number?”.  He spoke to such heroes as General Omar Bradley who signed the book about his life, and the book about President Eisenhower as well. Other heroes with whom he spoke, and who signed his books, include General Jimmy Doolittle, General Chuck Yaeger, General Paul Tibbetts, Ensign George Gay, Admiral Edwin (Ned) Beach, “Band of Brothers” leader Major Dick Winters and many, many others.

Many of the books in the library also contain his letters to these heroes, their responses, information from his research on the heroes or the battles, and even his own critique of the books themselves. He read each of the books at least once, with dozens more being read multiple times.

John volunteered more than 1,000 hours as a carpenter for the restoration of the Liberty Ship John W. Brown, which is moored in Baltimore, and among his greatest joys was being able to fly in a restored B-17, not once, but twice.

He proudly served in the US Air Force, though never in any sort of combat, where he met one of his closest friends who lived across the country from him.  It was with this friend that he made a pilgrimage to Europe in 2001 where these two men literally traced the path of the brave men and women who fought in the D-Day invasion. John himself “landed” at each of the beaches at Normandy where he collected pebbles and small bottles of sand from all from these hallowed locations.

He met General Tibbets and the entire crew of the restored B-17 “Shoo Shoo Baby” in Delaware at the plane’s rededication before its last flight to Wright Patterson Air Force Base (an event chronicled in World War II magazine) and secured the only memento of the day signed by the plane’s entire crew.

John’s love of flying began during the war at just five or six years of age when he constructed his own “airplane” using sawhorses and leftover lumber in his backyard as the war began. He became intrigued with the Allies’ pursuit of freedom when his father was sent to California by his employer Glenn L Martin and thus began his study of the war’s history; ending that study only in the final year of his life.

This auction will take place at the gallery of Richard Opfer Auctioneering – 1919 Greenspring Drive, Timonium, MD  21093.  This will be a LIVE auction as well as an online auction. Online absentee bidding will be available on HiBid for two weeks prior to the auction. Bidders may also bid live online though LiveAuctioneers. The auction will begin at 4:30 PM (eastern). To participate in the auction, visit www.overandaboveonline.com. The website provides clear links to the various means of participation, terms of sale, images and more.