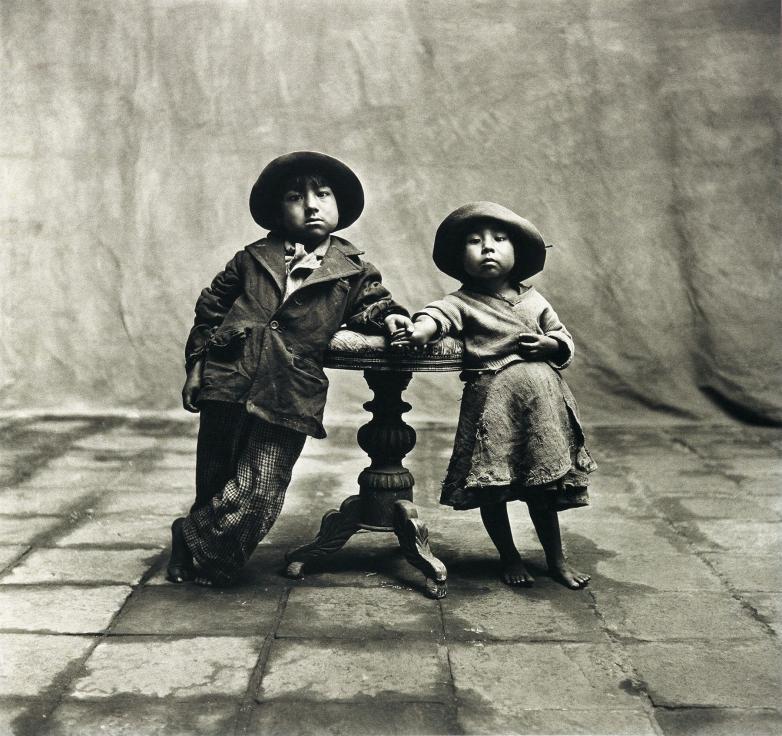 Irving Penn leads the sale with a platinum-palladium print, Cuzco Children, Peru, December, 1948, printed 1978, at $80,000 to $120,000. In 1948, after finishing an assignment for Vogue, Penn stayed in the city of Cuzco where he rented the studio of a local photographer. There he paid the locals to pose for photographs, taking an astonishing 2000 negatives over the course of three days—including multiple images of the children in the portrait on offer. Penn’s image captures the children as simultaneously innocent and knowing, childlike and mature, conveying a gravitas that belies their ages. Further works of note by Penn are a platinum-palladium print American Ballet Theatre, 1947, printed 1968 ($15,000-25,000), as well as portraits of American artist John Marin, platinum-palladium print, 1947, printed 1977 ($8,000-12,000), and fellow photographer Horst P. Horst, silver print, 1945-46 ($5,000-7,500).

Peruvian photographer Martín Chambi is present with a collection of 54 silver prints on carte-postale paper from the 1920s-30s. The images, depicting the architecture of Cuzco and archaeological sites and Incan ruins on the outskirts of the city, are expected to bring $10,000 to $15,000.

The house’s notable vernacular photography section includes a robust offering of collections and albums documenting the lives of women throughout the last century. A group of 11 photographs circa 1910-20 includes images of suffragists ($1,500-2,500); a 1969 archive entitled The Yearbook from Skidmore College that dates to one of Skidmore’s final years as a women’s college ($400-600); and a binder with 31 images, including nine group photographs, of African American women ($1,000-1,5000).

Exhibition opening in New York City October 12. The complete catalogue and bidding information is available at swanngalleries.com and on the Swann Galleries App.