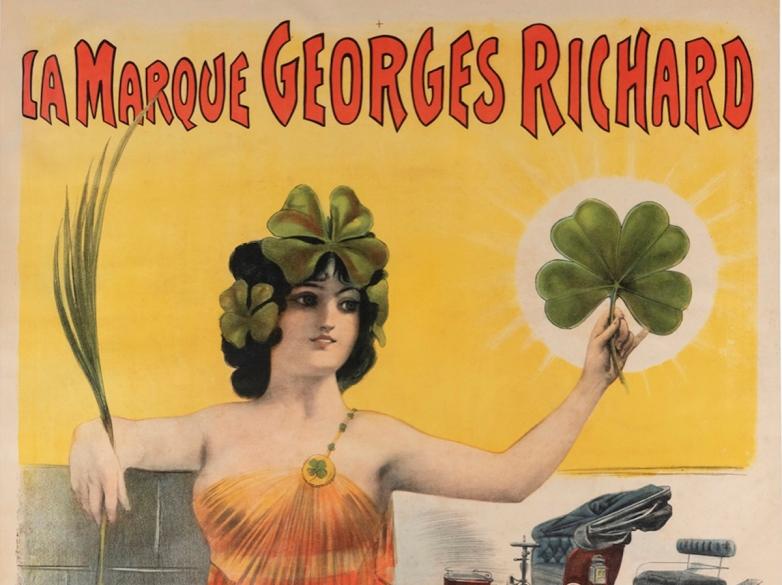 A c. 1890s color, linen-backed advertising poster for Georges Richard / Cycles & Automobiles, is estimated at $1,200-1,800. Ilustrated by Jean de Paleologues (1855-1942), this lithograph shows a woman holding a four-leaf clover and headdress, with profile illustrations of the company’s bicycle and automobile.

Chicago — Potter & Potter Auctions is pleased to announce this 760+ lot sale to be held on Saturday, May 15th starting at 10am CDT. Given current public health regulations, the event will be held entirely online and live streamed from the company's gallery, newly relocated to 5001 W. Belmont Ave., Chicago, IL 60641. All bidding will take place through Potter & Potter's website, which can be found at www.potterauctions.com. Phone and absentee bids are also welcome. All items are available for in-person preview now, by appointment only.

No passport is required to appreciate this event's premier selections of posters promoting overseas travel and adventure.
•    Lot #324, a lithographed poster for Velke Karlovice, Raj Lyzaru - a picturesque ski resort in today's Czechia - is estimated at $1,000-1,500.  This linen backed example is illustrated by Czech artist Ladislav Horak, measures 33-1/8" x 23-¼”, and features the profile of an athletic man skiing down an idyllic, snow covered run.
•    Lot #139, an award winning poster for Air India advertising flights from Paris, is estimated at $800-1,200. Produced in Bombay by Bolton Fine Art Litho Works in 1963, this linen backed piece pictures Air India’s mascot standing on the street corner offering “naughty pictures,” opening his jacket to reveal his wares. It measures 39 ¼" x 25 5/8"; this poster was voted the world’s best airline poster at the 1963 American Society of Travel Agents Contest.
•    Lot #24, Ottomar Anton's (1895–1976) Hamburg–Amerika Linie / 2 Days Across the Atlantic poster from c. 1936, is estimated at $2,000-3,000. Printed in Hamburg by Mühlmeister and Johler, this framed, linen backed color lithograph depicts the Hindenburg airship flying above a clipper ship on the Atlantic Ocean, emphasizing the swifter service of travel by air than by sea. The Hindenburg was known to have displayed two painted swastikas on its tailfins, but in this poster only one is shown.
•    Lot #57,  Adolphe Mouron Cassandre's (1901-1968) Statendam / Holland-American Line poster from the late 1920s, is estimated at $2,000-3,000. Published in Rotterdam by Nijgh & Van Dittmar, this lithograph measures 35-3/8" x 25-¾” and features a close-up illustration of the vessel’s chimneys and cowls.

Posters featuring United States travel destinations, transport services, and special events are also well represented in this sale.
•    Lot #157, David Klein's (1918-2005) TWA / Los Angeles poster from c. 1958, is estimated at $2,000-3,000. This fabulous and iconic midcentury color lithograph measures 40" x 25" and features the Hollywood Bowl, with klieg lights shooting rays into the starry night sky, through which a TWA jet passes.
•    Lot #105, a K.V. Greyhound Lines / A Good-Natured Map of The United States poster, is estimated at $300-500. This 19-¾" x 30-¼” example was published in Cleveland, OH by Reserve Litho & Printing Co. in 1934. It features a pictorial map of the USA with the routes of the Greyhound bus lines in black, and numerous illustrations of regional attractions, landmarks, natural features, and people - including a number of now racist stereotypes of African Americans and Native Americans.
•    Lot #209, Jo Mora's  (1876-1947) California / El Dorado of the West, is estimated at $800-1,200. This 24-¾" x 19” lithographed pictorial map of California includes numerous cartoonish illustrations of area cities and towns, national parks, landmarks, mission churches, historic sea vessels, and more.
•    Lot #176, a c. 1952 Las Vegas / Union Pacific travel poster, is estimated at $700-1,000.  This linen backed example measures 15-3/8' x 12” and features Vegas Vic, the iconic cowboy neon sign; casino chips; dice; and a fold-out postcard set with various images from Vegas.

This sale's entertainment posters, and other related works, are certain to provide serious distraction to collectors worldwide.
•    Lot #667, an original one sheet movie poster for Alice in Wonderland from Walt Disney/RKO, is estimated at $1,200-1,800. This 1951 example measures 41" x 26-7/8” and features the Mad Tea Party, with Alice surrounded by the Mad Hatter, March Hare, Tweedledee and Tweedledum, the Queen of Hearts, The Carpenter and the Walrus, and the Caterpillar.
•    Lot #658, a James Brown signed Chicago House of Blues grand opening poster from 1996, is estimated at $500-750. This 22-7/16" x 17-7/16” poster celebrates the opening of the Chicago blues venue, headlined by James Brown & His Orchestra and The Blues Brothers Band, plus guests including Isaac Hayes, Joe Walsh, Lonnie Brooks, and others.
•    Lot #650, a lithograph titled Movieland by Al Hirschfeld is estimated at $1,000-1,500. This 13-1/16" x 20-½” print from 1984 features some of the 20th century's most iconic stars of the silver screen, including Mickey Mouse, Marilyn Monroe, and Groucho Marx. It is signed in pencil on its lower right and numbered 211 of 250. 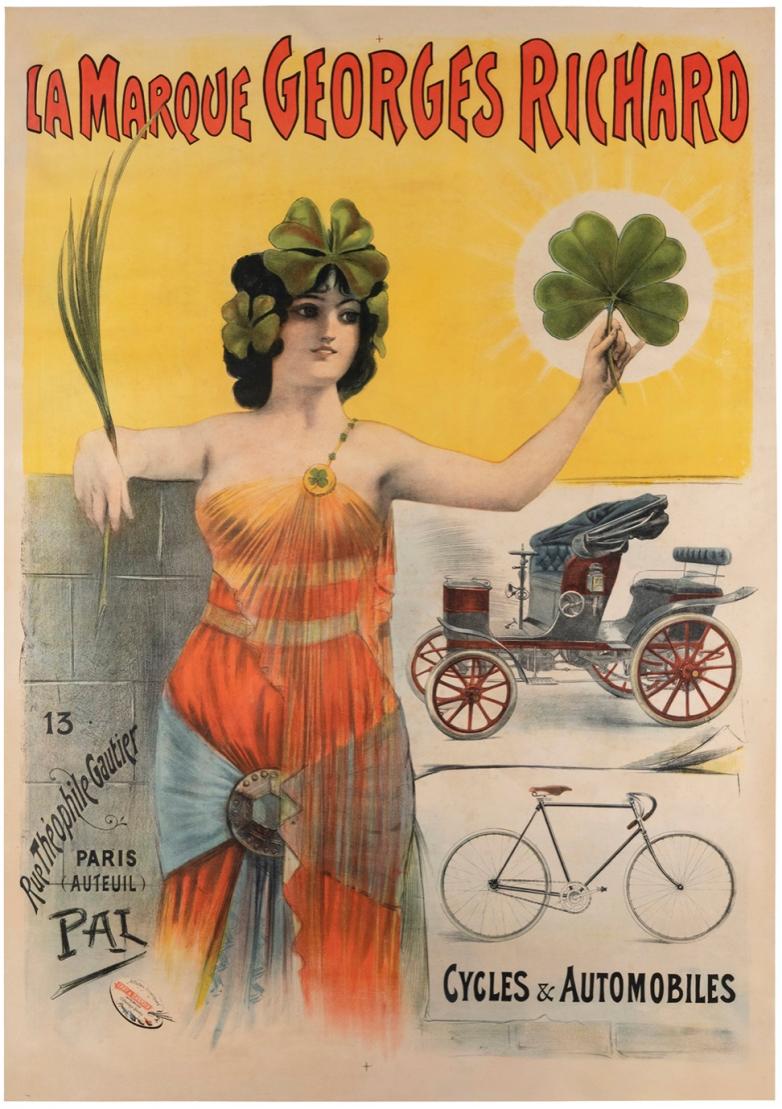 Posters marking key United States historical events, political movements, and initiatives are another call to action in this important sale.
•    Lot #515, James Montgomery Flagg's (1870-1960) Wake Up America Day April 19, 1917, is estimated at $4,000-6,000. This 41" x 28-3/16” broadside is printed in patriotic colors and depicts a woman running through the night with a lantern and a flag. It was created for Wake Up America Day, a celebration in New York City held 13 days after the US declared war against Germany and entered World War I; the also date marked the anniversary of the Revolutionary War battle of Lexington and Paul Revere’s ride. This event was designed to catalyze military enlistment.
•    Lot #536, a color lithograph celebrating the Illinois Centennial 1818-1918 by Willy G. Sesser, is estimated at $2,000-3,000. It is framed and matted, measures 40-¼" x 26-5/8”, and was printed in Chicago by the Illinois Litho. Co in 1918. It features a kneeling pioneer embracing the US flag, the Illinois statehouse, 20 stars representing the states admitted before Illinois, and a quotation from C.H. Chamberlain’s Illinois, composed by the Civil War veteran in the 1890s and which became the official state song in 1925.

According to Gabe Fajuri, President at Potter & Potter Auctions, "At a time when people are yearning to hit the road and break the monotony of the last year of lockdowns and stay-at-home orders, the strong travel section that leads our poster sale is as evocative as it is eye-catching. And the great diversity of images - in such a wide range of categories - certainly qualifies this sale as one of the "something for everyone" variety."