The Images that Defined America at Bonhams NY 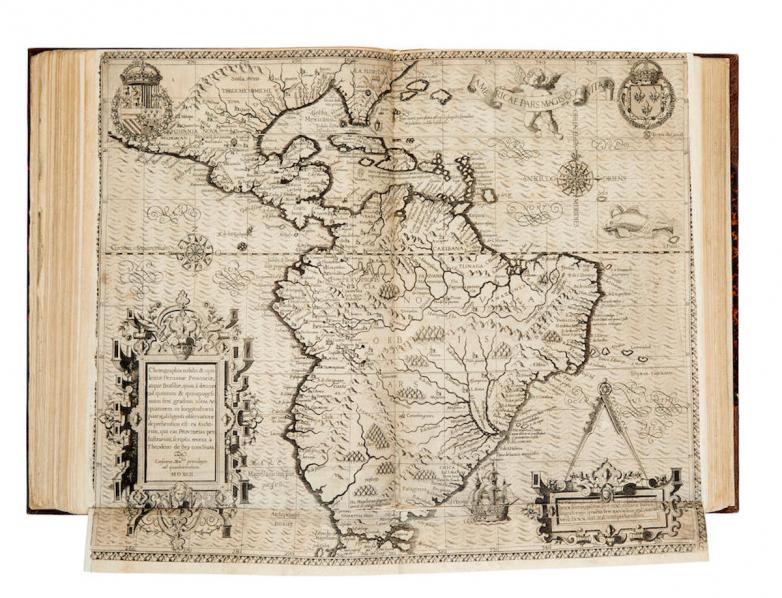 New York — The American West has long held a grip on the public imagination, and the work that is often credited with first defining the concept; The Yellowstone National Park, and the Mountain Regions of Portions of Idaho, Nevada, Colorado and Utah by the landscape painter Thomas Moran and the pioneering geologist Dr Ferdinand Hayden, leads Bonhams Americana, Travel and Natural History sale on Wednesday October 21 in New York. It is estimated at $150,000-250,000.

The work has been described as the greatest American landscape book of the post-civil war era. Its origins lie in an invitation to Moran from Dr Hayden, Director of the US Geological Survey, to accompany him on the 1871 geological survey of the until then unexplored region of Yellowstone. Moran’s astounding collection of paintings made an immediate impact and played an important role in the designation of Yellowstone as America’s first National Park in 1873. Fifteen of the paintings were published as chromolithographed plates by L. Prang & Co. of Boston in 1876 under the title The Yellowstone National Park, and the Mountain Regions of Portions of Idaho, Nevada, Colorado and Utah.

Bonhams Director of Books and Manuscripts in New York Ian Ehling said: “Moran and Hayden's masterpiece left an indelible impression, bringing the unique majesty of the West to public attention for the first time. The printing process itself was an immense achievement, involving up to fifty-six layers of carefully registered lithographic stones to create an extraordinary depth of color and adding immeasurably to the overall impact. It is rightly regarded as the pinnacle of the art of chromolithography.”

The complete suite of 15 vibrant chromolithographed plates, comprises: Gardiners River Hot Springs * The Great Blue Spring of the Lower Geyser Basin * The Castle Geyser, Upper Geyser Basin * The Lower Yellowstone Range * Yellowstone Lake * Tower Falls and Sulphur Mountain * Head of the Yellowstone River * The Grand Cañon of the Yellowstone * The towers of Tower Falls * The Mountain of the Holy Cross, Colorado * The Mosquito Trail, Rocky Mountains of Colorado * The Summit of the Sierras * The Great Falls of Snake River, Idaho Territory * Valley of the Bubbling Waters, southern Utah * The Great Salt Lake of Utah.

The robust Americana section will be followed by the Robert and Alice Piccus Collection of fine maps, and the Robert I Johnson, perhaps the largest private collection of books and on molluscs, including titles seldom found even in research libraries, including

•    A Journal of the Overland Route to California! and the Gold Mines by Lorenzo Aldrich. 1818/19-1851. First edition in original wrappers of one of the rarest and most interesting of the overland gold rush journals, being the first printed account of a 49'ers journey, from Albany, through Arizona to San Diego. It was published posthumously in Lansingburgh, just outside Albany, New York, by friends of Aldrich and is based on his diary and notes that he took on his trip across North America and back by ship. Estimate: US$40,000-60,000.

•    The Great Voyages - America. Printed in Frankfurt 1590-1592 by Theodor de Bry. The first Latin edition of the first three part of The Great Voyages by the Dutch engraver and publisher best known for his illustrations and maps for books on European expeditions to the Americans, but who famously himself never travelled to the New World. Estimate: US$30,000-50,000.

•    The Universal Conchologist, by John Martyn, Published in 1784. The “select edition” - one of a few copies for presentation with the plates finely hand-colored by Martyn to resemble original watercolors. It has been described as one of “the most beautiful of all shell books, containing exquisite renderings of shells collected on Cook’s three voyages and on other voyages”. Estimate: US$8,000-12,000.

•    Auserlesne Schnecken, Muscheln und andere Schaalthiere by Franz Michael Regenfuss. The first edition, containing Regenfuss’s spectacular conchological illustrations, is one of the most important shell books. It comes in a splendid contemporary Danish armorial binding with the Royal arms on the sides. Estimate: US$15,000-25,000.