Illuminated Manuscripts from the Royal Collection go on Display in Scotland 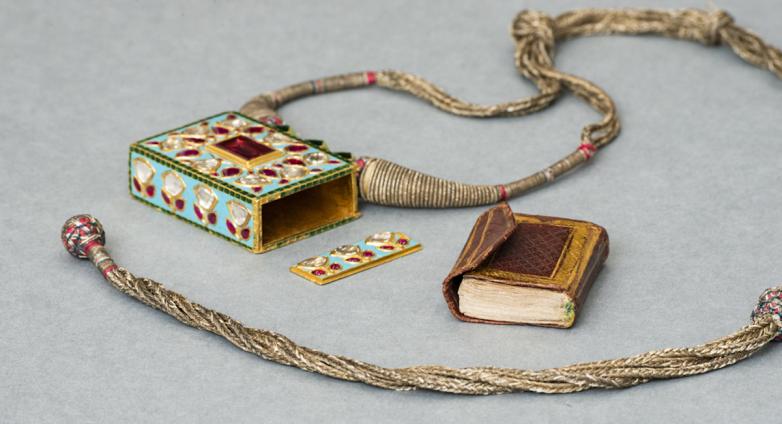 Edinburgh — Outstanding examples from the Royal Collection’s holdings of South Asian works of art have gone on display for the first time in Scotland at The Queen’s Gallery, Palace of Holyroodhouse. Eastern Encounters: Four Centuries of Paintings and Manuscripts from the Indian Subcontinent, opened Thursday 23 July, includes vivid depictions of the Mughal court, royal portraits, architectural studies and vibrant illustrations of Hindu epics from the area historically called India (now covered by India, Pakistan and Bangladesh). Together with decorative arts, prints, drawings and photographs, these works explore the 400-year shared history of the British Monarchy and the rulers of South Asia.

On display for the first time, an enameled gold locket, studded with diamonds and rubies, contains a miniature Quran measuring just 46 x 35mm. Dating from around 1700, the locket is said to have belonged to Zinat Mahal, wife of the last Mughal emperor, and was subsequently presented to Queen Victoria in the late 19th century. Also on display are an imperial Mughal spinel, a stone similar to a ruby, presented by Raja Sir Hira Singh of Nabha to King Edward VII as a coronation gift, and an early 17th-century Mughal dagger, known as a ‘khanjar’, with a rock-crystal handle inlaid with rubies.

The Mughal dynasty ruled between the 1500s and 1800s. In the 17th century, the Empire was richer and stronger than any European power, extending across most of the Indian subcontinent and ruling more than 150 million subjects. The Royal Collection’s holdings of Mughal works include 16th-century books of poetry and 17th-century portraits of Mughal courtiers and princesses. The Padshahnama (‘Book of Emperors’), a chronicle commissioned by the fifth Mughal Emperor Shah-Jahan (famous for commissioning the Taj Mahal) as a celebration of his reign and dynasty, was presented to George III in 1798 by Lord Teignmouth, Governor-General of India, as a gift from the Nawab of Awadh. Teignmouth described the Padshahnama as ‘the most splendid’ manuscript he ever saw.

The rise of the East India Company is reflected in many Indian works of art presented to and acquired by successive British monarchs.  A European-style oil painting, recently identified as a portrait of the Mughal emperor Akbar Shah II and his sons, was sent as a gift to George IV in 1830 in an attempt to garner the king’s support as  relations between Akbar and the Company became strained. One of the Princes was to become Bahadur Shah Zafar, the last Mughal emperor. Colonel Colin Mackenzie, a Scottish army officer in the East India Company and the first Surveyor General of India, commissioned detailed architectural drawings from South Indian draughtsmen. They include a study of an elevation of the temple at Srirangam, one of the most important Hindu pilgrimage sites in India.

Queen Victoria received many illuminated royal letters from Indian rulers and gifts of paintings and manuscripts from South Asia. Among them is a volume of her own published journals, The Queen’s Travels in Scotland and Ireland, translated into Hindi by the Maharajah of Benares. The volume was given to her son King Edward VII, when Prince of Wales, during his 1875–6 tour of India for presentation to his mother on his return. Victoria's interest in South Asian culture continued throughout her life. Her studies of the Hindustani language, undertaken in her seventies with her Indian secretary Abdul Karim, are recorded in her Hindustani diaries, which are displayed in the exhibition with her Hindustani phrasebook.

The future King George V and Queen Mary first undertook a royal tour of South Asia in 1905–6. They became the first reigning British monarch and consort to set foot on Indian soil when they visited for a second time as Emperor and Empress of India for a Coronation Tour in 1911–12. Queen Mary compiled albums and scrapbooks of the visit, and noted in her diary that she was ‘particularly interested in the exquisite drawings’ by modern Indian artists. She acquired numerous South Asian works of art, including the final work in the exhibition, Queen Tissarakshita, 1911, by Abanindranath Tagore, founder of the Bengal School of Art.

Imtiaz Dharker, a British poet who grew up in Glasgow, has written new poetry in response to works in the exhibition and the stories behind their creation. Visitors to The Queen’s Gallery will be able to hear Imtiaz reading her poems on the exhibition’s multimedia guide.

Eastern Encounters: Four Centuries of Paintings and Manuscripts from the Indian Subcontinent is at The Queen's Gallery, Palace of Holyroodhouse from 23 July 2020 to 31 January 2021.

The accompanying publication, Eastern Encounters: Four Centuries of Paintings and Manuscripts from the Indian Subcontinent, is published by Royal Collection Trust, price £29.95.