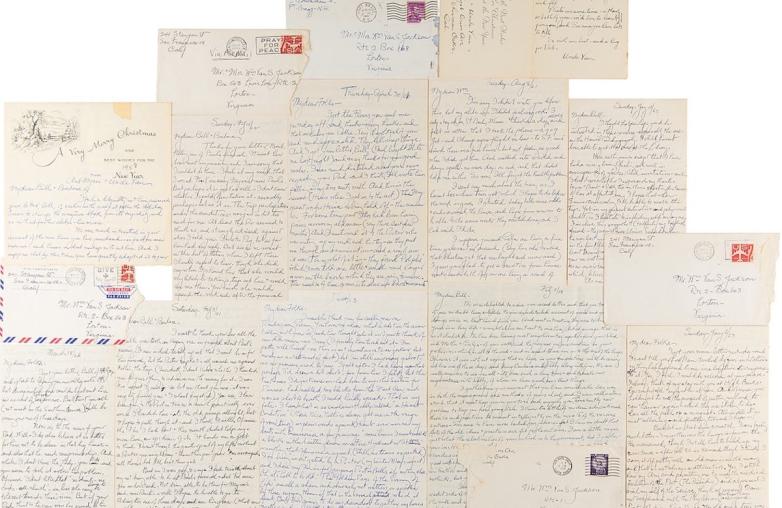 Boston — RR Auction's September Fine Autographs and Artifacts sale boasts an extraordinary selection of over 900 items, with a special focus on Hollywood, classical music, and icons of history.

Among the Hollywood rarities represented are horror heroes, including Edward Van Sloan in a terrifically rare letter archive. The archive of 11 letters from the classic horror actor whose memorable roles in Dracula, Frankenstein, and The Mummy have earned him immortal status in the canon of horror cinema. In the archive, Van Sloan comments on Eisenhower, Beethoven, and Dracula: "It was gosh awful thirty-five years ago—what it must be like today! I think nothing dates faster than a motion picture." An unprecedented letter collection from Van Sloan, who remains exceedingly rare across all signed and handwritten formats. (Estimate: $8,000+)

A Tod Browning letter that was signed the year he directed Freaks. The one-page letter of recommendation on personal letterhead, dated November 26, 1932. Browning remains rare across all signed formats, with this being just our third item and the very first letter we have offered from the influential filmmaker. Furthermore, this example is made all the more significant given that it was written in 1932, the same year Browning released the cult classic Freaks, a film widely considered the director's magnum opus. (Estimate: $2,000+)

A rare letter by Ed Wood on his unfinished pet project, "Hell Born." The one-page letter, on personal letterhead, is dated September 30, 1958. Letter to Marge Usher, in part: "I will personally do what I can, in any way, to enhance the production of this film." A rare and intriguing piece of cinematic correspondence by the B-movie icon. (Estimate: $2,000+)

A James Whale original still life painting by the great horror director— featuring a bouquet of multicolored flowers. The consignor notes that Whale gifted this painting to actress Mae Clark, who famously starred as Elizabeth Lavenza in Frankenstein. Given the artwork's date of 1956, this is likely one of the, if not the last, paintings Whale finished before his death the following year. (Estimate: $2,000+)

A scarce letter by the cult horror icon Rondo Hatton. The three-page letter, circa 1945. Handwritten letter offering some wise words of advice and commenting on an upcoming role. "I'm working in a new movie, 'Murder Mansion,' hence, kept plenty busy." Hatton's autograph is virtually nonexistent in any form—this is the first we have offered in nearly ten years. (Estimate: $1,500+)

Ludwig van Beethoven letter to Franz Christian Kirchhoffer concerning the sending of the 'Missa Solemnis' to London. The one-page letter in German, circa September 1823. A superb autograph letter by the revered composer. (Estimate: $80,000+)

And a Franz Joseph Haydn signed document. The pristine publishing contract for Haydn's magnificent final oratorio, 'The Seasons.' An outstandingly rare document from the prominent composer at the close of his distinguished career. (Estimate: $60,000+)

Plus icons like Marilyn Monroe, Alfred Hitchcock, John Wayne, and the Marx Brothers.

The auction is rounded out by unseen photos of Elon Musk, a handwritten letter by 16-year-old Napoleon Bonaparte, and autographs of Stephen Hawking, Albert Einstein, and Benjamin Franklin.

The Fine Autograph and Artifacts auction by RR Auction began on August 12 and will conclude on September 14.  For more information, go to www.rrauction.com.