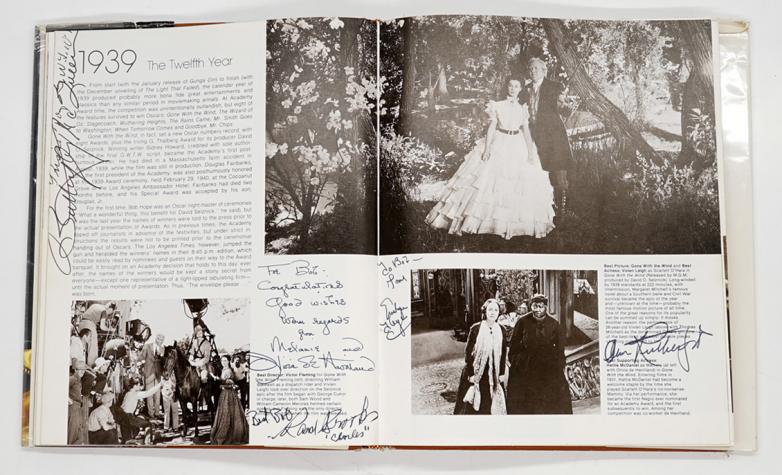 Two pages from Robert Osborne’s personal copy of the 1979 book he authored titled 50 Golden Years of Oscar®: The Official History of the Academy of Motion Picture Arts and Sciences. The book contains 383 autographs of Oscar winners and nominees. Estimate: $20,000-30,000

Davenport, WA – To millions of movie fans, Turner Classic Movies (TCM) host Robert Osborne (1932-2017) was not just the ultimate authority on Hollywood’s entertainment industry, he was also very much a part of it. His urbane demeanor and calmly authoritative voice made him a compelling presence on television. At the Academy Awards® and other red carpet events, Osborne was a bona-fide A-lister, right alongside the stars he chronicled in his lifelong career as a movie historian.

Osborne’s passion for motion pictures was part of his DNA. “It was both his work and his hobby,” said Grant Zahajko, owner of Grant Zahajko Auctions, the Davenport, Washington, company commissioned to sell Osborne’s personal collection of Hollywood memorabilia. The October 10 auction is “a living representation of Mr Osborne’s distinguished career,” Zahajko said, and includes prized memorabilia and photographs amassed over 50+ years. The archive is owned by Osborne’s three nieces, who felt their uncle would have wanted it sold through an auction house in the family’s native Washington state. Remote bidding will be available worldwide via phone or Internet.

The collection’s headliner is the 1936 Oscar® statuette awarded to acclaimed art director Richard Day for his work on the 1935 film The Dark Angel, starring Fredric March and Merle Oberon. Day was nominated for 20 Academy Awards® between the years 1930 and 1970, and won seven, including Best Art Direction for A Streetcar Named Desire (1951) and On the Waterfront (1954).

“The sale and purchase of Oscar® statuettes is strictly controlled by the Academy of Motion Picture Arts (AMPAS®), however there are rare instances when they can be made available in the marketplace, as is the case with the Oscar® from Mr Osborne’s archive, it’s very exciting for collectors,” Zahajko said. Last year Gregory Peck’s Oscar for the 1947 film Gentleman’s Agreement sold for nearly $500,000, and in 1999, Michael Jackson paid $1.5 million for David O. Selznick’s 1940 Gone With The Wind Oscar®. Richard Day’s Oscar® will be offered with a $70,000-$100,000 pre-auction estimate.

Another premier item in the auction is Robert Osborne’s personal copy of the 1979 book he authored titled 50 Golden Years of Oscar®: The Official History of the Academy of Motion Picture Arts and Sciences. For decades, Osborne sought and secured the autographs of Oscar®-winning stars – Best Actor and Actress, and Best Supporting Actor and Actress – on pages pertaining to the films in which they had appeared and for which they had won their awards. Additional pages feature the signatures of other category winners and nominees. The book contains no fewer than 383 signatures, including those of Katharine Hepburn, Ingrid Bergman James Stewart, Elizabeth Taylor, Rock Hudson, Bette Davis, Lord Laurence Olivier, Lana Turner, Carrie Fisher, Christopher Reeve, and many other screen legends. A unique compilation of signatures, the 294-page book is expected to sell for $20,000-$30,000.

The Robert Osborne Movie Memorabilia Collection is vast and comprehensive, with a timeline that documents the motion picture industry from the 1930s through present day. Its holdings include thousands of stars’ photographs and signed letters; publicity, still and wire-service photos; press kits, early movie magazines, lobby cards and more. An original three-sheet movie poster from the 1949 Gary Cooper film The Pride of the Yankees, in unused, like-new condition, is entered in the auction with a $4,000-$6,000 estimate. A signed photo of Babe Ruth in Yankee pinstripes, swinging a bat, has a $7,000-$9,000 estimate.

The Robert Osborne Movie Memorabilia Collection featuring a 1936 Oscar® statuette will be auctioned on Thursday, October 10, 2019, in a live event at Grant Zahajko Auctions’ gallery located at 510 Morgan St., Davenport (suburban Spokane), WA 99122. Start time is 3 p.m. PT / 6 p.m. ET. All forms of remote bidding will be available, including absentee, phone, and live via the Internet through Grant Zahajko Auctions’ bidding platform: https://bid.gzauctions.com . For additional information on any items in the auction, call 509-725-5600 or email info@gzauctions.com. Online: www.gzauctions.com.