Wilton, CT – An exquisite portrait miniature of Thomas Jefferson along with two locks of hair (one of them Jefferson’s), and a letter and photograph signed by Albert Einstein are just two of the superstar lots in University Archives’ online-only auction of rare manuscripts, autographs and books scheduled for Wednesday, April 14th. The auction will start at 10:30 am Eastern time.

The catalog is up for viewing and bidding now, on the revamped University Archives website (www.UniversityArchives.com), as well as the platforms LiveAuctioneers.com, Invaluable.com and Auctionzip.com. Phone and absentee bids will also be accepted. It’s just the second auction that will be conducted from University Archives’ new, 6,000-square-foot offices in Wilton, Conn.

“This sale is particularly strong in the presidential, science, foreign, and African American collecting categories, but maps, early American, literary, Civil War and World War II are also well-represented,” said John Reznikoff, president and founder of University Archives. “The sale is packed with items signed by many of the greatest figures in all of history – 356 lots in all.” 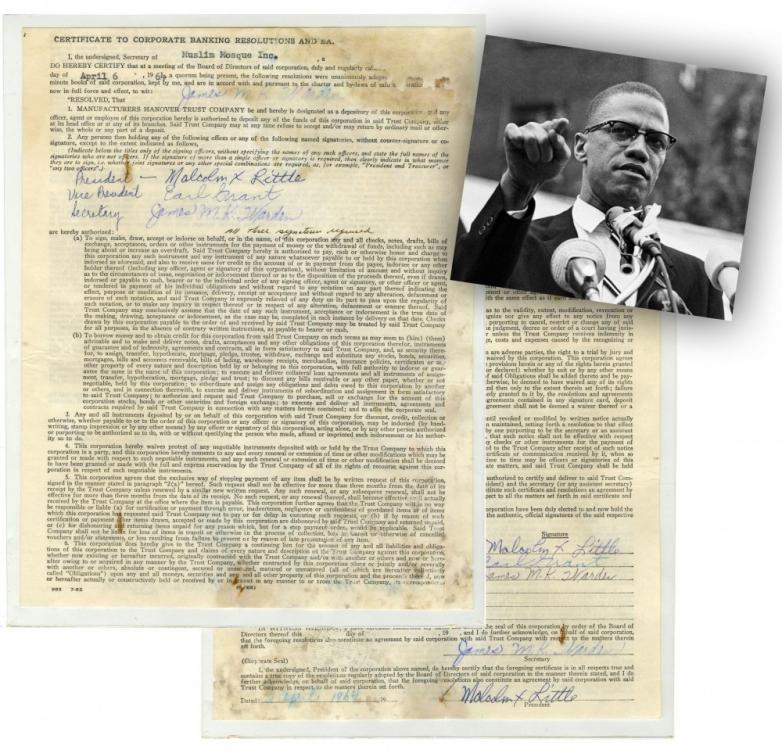 Major categories include presidential, from Washington to Biden; science (Einstein, Darwin and others); foreign (Paul Gaugin, Adam Smith, Russian czars and others); African American (Muhammad Ali, Malcolm X and others); early American (Samuel Adams, John Hancock and others); literary (Whitman, Dickens, Joyce and others); and space / aviation (Charles Lindbergh, the Wright Brothers, Neil Armstrong, the Atomic Bomb, the Enola Gay airplane and others).

The diminutive portrait of Thomas Jefferson is attributed to the British miniaturist Robert Field (1769-1819). It’s being offered along with two distinct hair locks of 1,000 strands or more visible under glass with a monogrammed “TJ” cipher on the reverse. One of the hair locks belongs to Jefferson; the other donor is open to speculation. The lot has an estimate of $60,000-$500,000.

There are seven lots dedicated to Albert Einstein, including a humorous letter that “patron saint” Einstein wrote to members of a fan club in 1928, in which he advises his followers to “Seek to understand everything, despise no one, [and] believe nothing blindly.” The letter is accompanied by a fine vintage photograph of the revered genius. The lot is expected to bring $50,000-$60,000.

In a three-page letter signed by Adam Smith, the Scottish economist discusses differences in exchange rates, a subject he would expand in his seminal 1776 monograph, The Wealth of Nations. He also touches on financial and moral responsibility, and matters relating to money, in this 1759 missive addressed to the 1st Earl of Shelburne from Glasgow (est. $60,000-$70,000).

Muhammad Ali and Malcolm X are just two of the significant African American historical figures featured in the April sale. A presentation copy of The Holy Quran, signed and inscribed by Muhammad Ali to Drew Brown, his friend and corner man, should go for $9,000-$10,000; while a banking document signed three times by Malcolm X (“Malcolm X Little”), for Muslim Mosque, Inc., two printed pages dated April 2, 1964, carries an estimate of $18,000-$20,000.

In March 1944, President Franklin Roosevelt wrote a remarkable typed letter signed to Indiana Bishop John F. Noll regarding the imminent Allied invasion of Fascist-controlled Rome and the Vatican City. The letter is expected to fetch $8,000-$9,000. Also, a Timex watch presented by then-President George H.W. Bush to Congressman Bill Young of Florida, with “George Bush” in gold on the face, plus an accompanying card signed by Bush, should finish at $5,000-$6,000.

A rare and highly important 126-page Pony Express ledger of mail sent and received at Fort Bridger, Utah in 1860-1861, the only document of its kind in private hands, is expected to knock down for $30,000-$50,000. Also, an enormous 1865 hand-colored and lithographed folding Topographical Map of the City of New York, Showing Original Water Courses and Made Land, by Robert Craighead, over five feet long, should make $7,500-$10,000.

A three-page letter written by French artist Paul Gaugin to his friend, mentor, and fellow artist Camille Pissarro in 1882, regarding fundamental ideas about art, artists and artistic methodology, has an estimate of $40,000-$50,000. Also, a postcard written and signed by poet Walt Whitman in 1889, to the French poet Gabriel Sarrazin (“Am preparing an edition of Leaves of Grass….am getting along better + gayer heart than you might suppose”), should hammer for $6,000-$8,000.

A beautiful two-volume hardcover set of the first edition, first printing of Charles Darwin’s The Descent of Man (London, John Murray, 1871), with a gorgeous signature (“Charles Darwin”) laid in, is expected to change hands for $12,000-$14,000; while an archive of letters written by British Prime Minister Benjamin Disraeli, dating from circa 1861-1869, on a variety of topics ranging from everyday issues to political matters, some signed, should go for $1,800-$2,400.