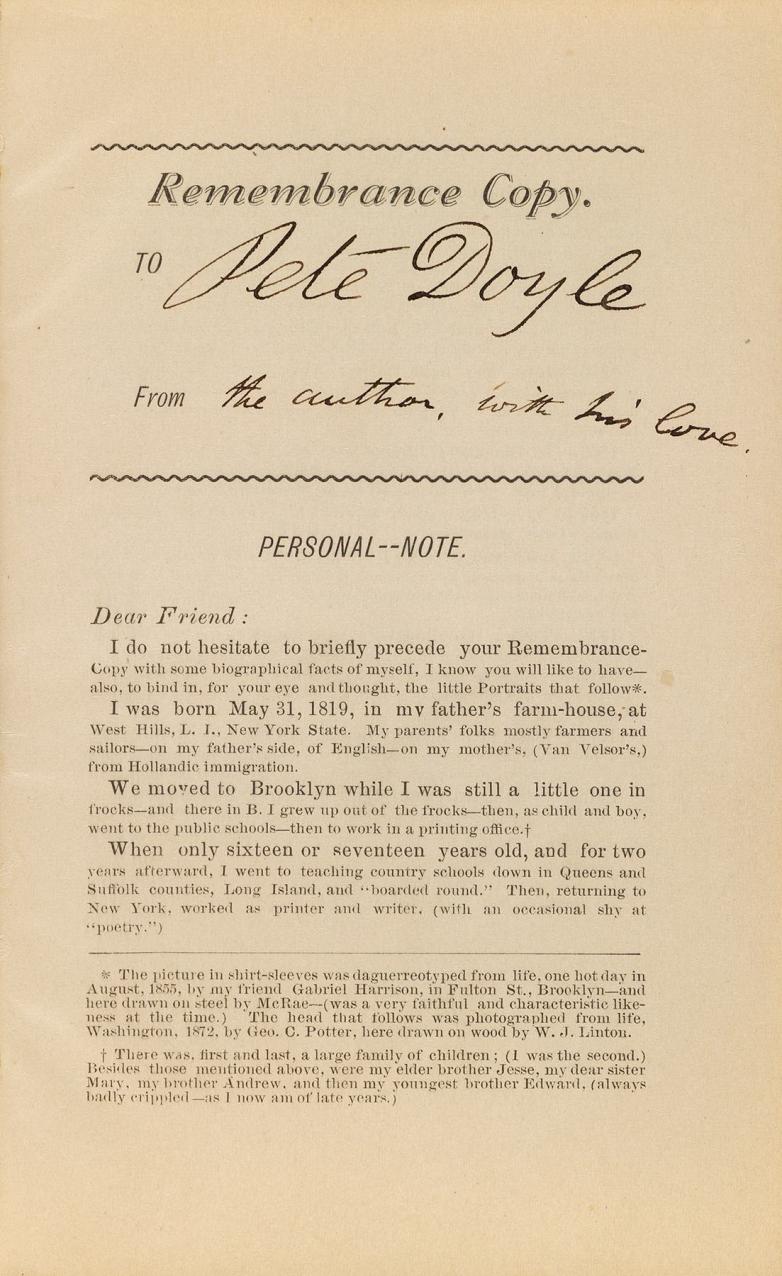 New York — The Pride Sale at Swann Galleries on Thursday, June 20 offered a curated selection of LGBTQ+ art, photography, literature, autographs and ephemera from the past 200 years, with many first-time appearances on the market. The sale was a resounding success with 75% of the lots finding buyers, bringing a total of $950,833.

Topping the sale was Peter Hujar’s portrait of David Wojnarowicz. The 1985 silver print sold after aggressive bidding between two collectors on the phone for $106,250, a record for the artist. “Hujar's compelling portrait captures an intimate moment in 1985, a few years after the couple first met. Hujar, who was 20 years Wojnarowicz's senior, was initially a mentor, introducing him to photography and darkroom practices; soon after they became lovers. The strong bond between the two is encapsulated in David poignant statement, ‘Everything I made, I made for Peter.’ It was deeply satisfying to bear witness and see these two giants of the LBGTQ+ and photographic communities generously recognized,” noted Daile Kaplan, Swann VP and Director of Photographs.

Additional works by Hujar included Come Out!, 1969, an iconic-image that was used for numerous Gay Liberation Front posters ($10,000). David Wojnarowicz also featured in the sale with True Myth / Domino Sugar, a 1983 screenprint on a supermarket poster, that earned $13,000, a record for the print, and Neon Dancer, a 1982 postcard to activist Jim Fouratt with a multimedia drawing by the artist, which brought $17,500.

Further photographic material included an important selection of works by Robert Mapplethorpe: Jim and Tim in Sausalito, 1977, which brought a record for the silver print at $25,000. The artist’s complete 1981 Z Portfolio reached $47,500, and a selection of four works from the 1978 X Portfolio sold for $21,250. Duane Michals’ Narcissus, 1985, earned a record for the sequence at $27,500. There was a frenzy of bidding as works by Donna Gottschalk and Joan E. Biren (JEB) came across the block. High points of the run were Sisterhood Feels Good, a 1971 poster by Times Change Press which utilized Gottschalk’s Sleepers, Limerick, Pennsylvania photograph ($1,125), and JEB’s 1971, printed 1997, silver print Charlotte Bunch with members of the Furies in the living room of one of their collective houses ($3,000). Works by Don Herron, Annie Leibovitz and Jack Smith rounded out a standout offering.

Autograph material proved to be popular as well, with an autograph letter signed by Harvey Milk on March 7, 1978, as the acting Mayor of San Francisco, garnered a record for an autograph by the politician at $11,250. The note was written to Don Amador, a leading LA-based activist, and his husband Tony Karnes, and exlaims: “Thought you should have a memo from the 1st upfront gay mayor of any city–it’s for real!!!” An archive of personal effects of trans icon Candy Darling, which included letters, photographs, and her personal datebook and diary for 1970, was won for $19,500.

Literary highlights featured a remembrance copy of Walt Whitman’s Memoranda of the War, 1875-76, inscribed by the author, “with his love,” to his partner Peter Doyle, which brought a record for the work at $70,000. Also of note was a marker and graphite study for Frog and Toad Together, 1972, by Arnold Lobel ($9,375).

Fine art from the early-twentieth century included a pen, ink and pencil preliminary sketch for Horseplay, 1935, by Paul Cadmus ($47,000) and Gerda Wegener’s circa 1920 crayon, charcoal and wash drawing, Two Women in a Window, which featured her partner Lili Elbe ($20,000). Works from the latter half of the twentieth century included pieces by Andy Warhol, Michael Leonard and Henry Scott.

Of the sale, Nicholas D. Lowry, Swann President, said, “It is validating as a specialist to discover that you can still be pleasantly surprised at an auction. The catalogue was extremely well received, the exhibition was well attended and the auction itself was busy and the bidding was active. Works from every single one of our areas of specialty achieved prices that helped us to decide to turn this auction into a yearly event. The sale was a historic, artistic and cultural exploration for the whole company. We were proud to be able to do it and delighted it turned out so well.”