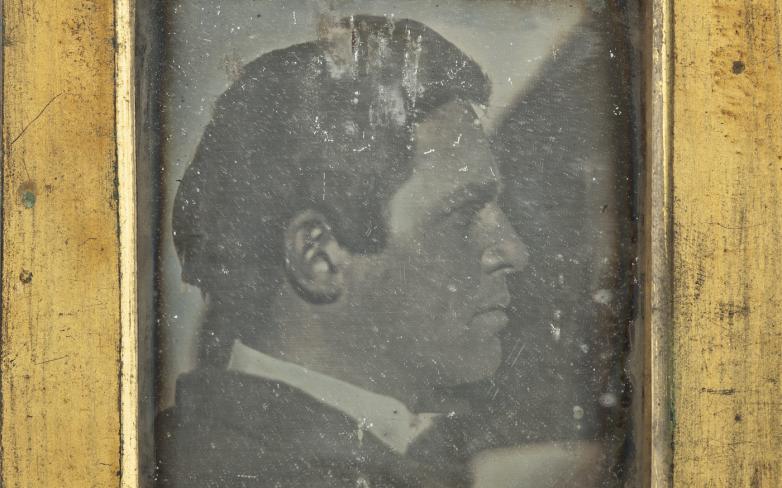 Daguerreotype portrait of Henry Fitz Jr. Taken some time during January, 1840. One of the earliest surviving photographic portraits taken in America.

Cincinnati, OH – On November 15, Hindman Auctions will offer The Henry Fitz Jr. Archive of Photographic History. Forgotten since the 1930s, a cache of some of the earliest photographic portraits taken in America was recently discovered in an unheated shed near Peconic, Long Island. It has been heralded as a “national, if not international treasure” by Grant Romer, a photo historian and Curator Emeritus of the George Eastman Museum, the world’s recognized home of photographic history. The archive consists of 22 daguerreotype portraits of Henry Fitz Jr. (1808-1863) and his family taken between 1840 and 1842.

The daguerreotype, a process used to capture an image on a silver-plated sheet of copper made sensitive to light, was introduced to the United States from France in the spring of 1839. A complete description of the process became available later that fall, and entrepreneurs in New York and Philadelphia raced to be the first to produce marketable photographs. Fitz, along with partners Alexander Wolcott and John Johnson won the race.

Fitz, a New York city telescope maker, also helped develop what would become the first patented camera in America. In January 1840, he sat for some of the earliest successful photographic portraits taken in America, including a small profile image found in the recent discovery. A mere handful of these early portraits from the dawn of American photography have survived.

“Imagine a world with no ability to capture a photographic portrait,” says Wes Cowan, Vice Chair of Hindman Auctions. “Once you wrap your head around that, the Fitz portrait is a window into the beginnings of a technology that would forever change the world and how we see ourselves in it.”  Cowan, an expert in the world of early 19th century photography, has been selling photographs to institutions and collectors for more than 30 years. He was also a featured appraiser at PBS’ Antiques Roadshow’s photography table for nearly 15 years.  “Any scholar interested in the history of photography in America has heard of Fitz and knows that he sat for some of the earliest portraits taken. When I first saw the collection, the hair on my arm literally stood on end,” added Cowan.

The Fitz collection descended through the family of his son George Wells Fitz (1860-1934) and includes several additional portraits of Henry Fitz, his wife and sister, and other images presumed to be members of his family. Ironically, the collection has been known since the 1930s when another son, “Harry” Fitz donated a group of early daguerreotypes to the Smithsonian Institution. Among this group was a portrait of their father claimed by the Fitz family to be the earliest self portrait of living human. Harry urged the Smithsonian to contact George to acquire additional historically important Fitz family property but nothing came of it.  And so, the archive lay forgotten in George’s workshop and office in a shed behind the family home in Peconic for nearly eight decades. It was discovered in early 2020 in preparation of the sale of the property.

“As one of the earliest surviving photographic portraits in America, the Fitz profile, is of course incredibly important,” says Romer. “But frankly, the collection in toto represents an extraordinary opportunity for scholars to understand the first few months of the development of a technology and art that would change the world.  It really demands to be preserved.”

How to Bid
Bidding for the November 15th auction begins at 10 am ET. Bidders will be able to participate in-person, via absentee bid, by phone, or live online through the Digital Bid Room, Hindman’s recently launched online and mobile bidding platform. Private preview of the auction will be available at Hindman’s Cincinnati office, by appointment only.

Additional information about the auction can be found at the auction page here and the catalogue can be viewed here.