Dallas, TX – A Columbia Law School textbook once owned and full of notes by one of the unquestioned giants of the U.S. legal system will occupy a new shelf after it is sold in Heritage Auctions’ Manuscripts Auction May 19.

Ruth Bader Ginsburg's Personal Heavily Annotated Columbia Law School Book, The French Legal System – An Introduction to Civil Law Systems likely is the first of her textbooks ever brought to market, one of the texts that helped to launch the career of a pioneer in the battle for women’s rights and LGBTQ rights, who changed the role of women in the legal world. 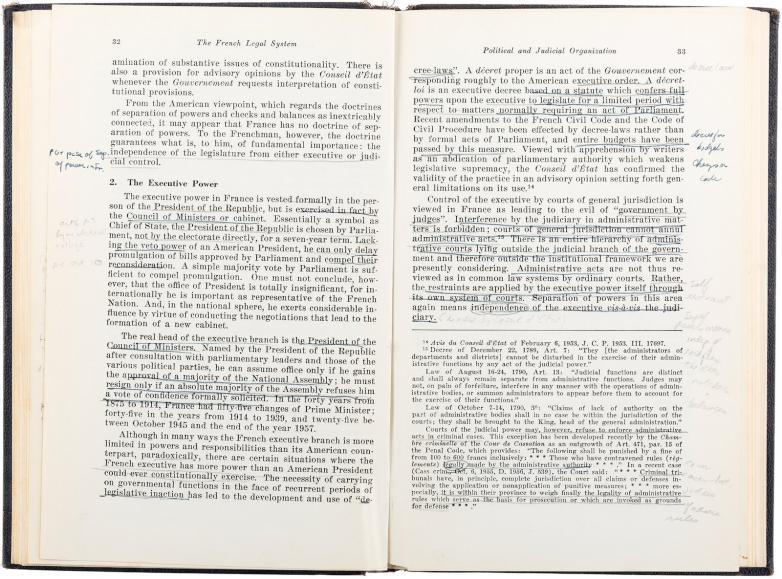 “Our Nation has lost a jurist of historic stature,” Chief Justice John Roberts said after Ginsburg died Sept. 18, 2020. “We at the Supreme Court have lost a cherished colleague. Today we mourn, but with confidence that future generations will remember Ruth Bader Ginsburg as we knew her — a tireless and resolute champion of justice.”

Ginsburg’s impact began long before she reached the Supreme Court; more accurately, it began during her study of law, when she owned the offered book by René David and Henry P. DeVries, which carries a pre-auction estimate of $10,000+ and retains the original "From the Library of Ruth & Martin Ginsburg" bookplate affixed to interior front board.

“She started law school at Harvard in 1956, where she was one of just nine women in a class of about 500, so she already had begun her stature as pioneer of women in the legal field,” Heritage Auctions Historical Manuscripts Director Sandra Palomino said. “When her husband accepted a job in New York City, she transferred to Columbia, where she became the first woman to be on two major law reviews: the Harvard Law Review and Columbia Law Review, and graduated tied for first in her class. So many think of her as a brilliant jurist, which she was, but that career started only because she was an extraordinary scholar at two of the finest law schools in the world.”

Ginsburg ascended through the legal ranks until she was nominated in 1993 by President Bill Clinton as an associate justice of the Supreme Court of the United States where she served for the rest of her life.

Ginsburg’s impact bridged political divides, leaving friends and admirers on both sides of the political aisle.

Former President George W. Bush issued a statement after her death saying, "Justice Ginsburg loved our country and the law. Laura and I are fortunate to have known this smart and humorous trailblazer, and we send our condolences to the Ginsburg family." The president who nominated her, Clinton called her "one of the most extraordinary Justices ever to serve on the Supreme Court. Ruth Bader Ginsburg’s life and landmark opinions moved us closer to a more perfect union. And her powerful dissents reminded us that we walk away from our Constitution’s promise at our peril.”

“She was more than a lawyer, more than a Supreme Court Justice,” Palomino said. “She became a larger-than-life figure, an unwavering champion of human rights, but also something of a pop culture figure. She embraced Saturday Night Live’s parody of her, and left many people across the country mourning when she died. Her character and personality entertained many, but her persona grew out of her legal prowess, which started in books like this one.

“Her handwritten notes offer a glimpse into her mind when she was just beginning to pursue a career in law, making this book an exceptional find for anyone who collects legal or historical documents.”

For images and information on all lots in the sale, visit HA.com/6236.