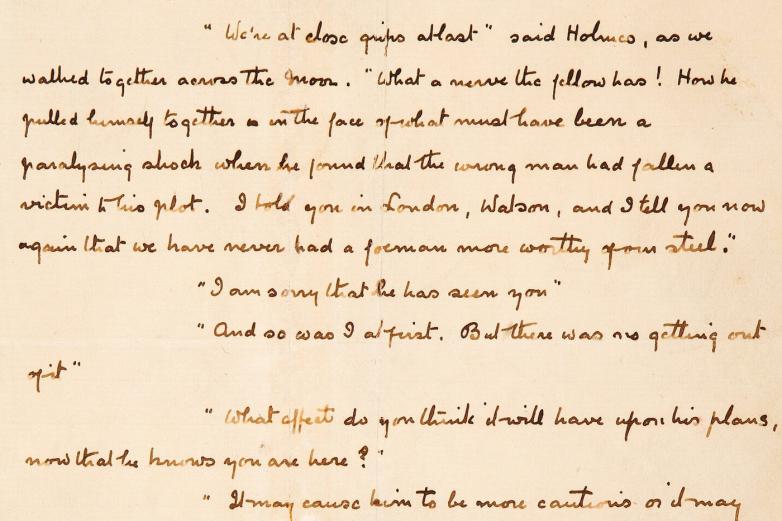 Dallas — One of the few remaining handwritten pages from the original manuscript of Sir Arthur Conan Doyle's third novel and fifth "Sherlock Holmes book," The Hound of the Baskervilles (estimate: $170,000+), will begin a new chapter of its own when it is sold in Heritage Auctions' Manuscripts Auction Nov. 6.

Published in 1902, The Hound of the Baskervilles is the novel in which Doyle brought back his most famous character, after killing off Holmes in 1894, and remains one of the most popular among Doyle's Sherlock Holmes books.

"McClure, Phillips & Company, the New York publisher of the book, embarked on a publicity campaign in an effort to promote the book and the return of Sherlock Holmes," Heritage Auctions Historical Manuscripts Director Sandra Palomino said. "They asked Doyle for the original manuscript, and when they received it, they broke up the pages and offered them individually to dealers who purchased copies of the book.

"Unfortunately, the manuscript was written on paper that was popular at the time ... but also was very acidic, so it deteriorated more quickly than many other varieties. Therefore, not many pages have survived, and of those, few are in this condition, making this important piece of literature a must-have rarity for serious collectors."

It is notable that Holmes appears in less than half of the book — most of the tale centers around his assistant, Dr. Watson. Therefore, adding to the importance of this page is that includes an entire scene in which Holmes discusses the mysterious murder on the moor with Watson.

The page reads, in part:

"We're at close grips at last," said Holmes, as we walked together across the moor. "What a nerve the fellow has! How he pulled himself together in the face of what must have been a paralysing shock when he found that the wrong man had fallen a victim to his plot. I told you in London, Watson, and I tell you now again, that we have never had a foeman more worthy of our steel."

"I am sorry that he has seen you."

"And so was I at first. But there was no getting out of it."

"What effect do you think it will have upon his plans, now that he knows you are here?"

"It may cause him to be more cautious or it may drive him to desperate measures at once. Like most clever criminals, he may be too confident in his own cleverness and imagine that he has completely deceived us."

"Why should we not arrest him at once?"

"My dear Watson, you were born to be a man of action. Your instinct is always to do something energetic. But supposing for argument's sake that we had him arrested tonight, what on earth the better off should we be for that? We could prove nothing against him. I know where he keeps his hound, but what of it? [Previous sentence is crossed out.] There's the devilish cunning of it! If he were acting through a human agent we could get some evidence, but if we were to drag this great dog to the light of day it would not help us in putting a rope round the neck of its master."

"Surely we have a case."

Other highlights in the auction include, but are not limited to: