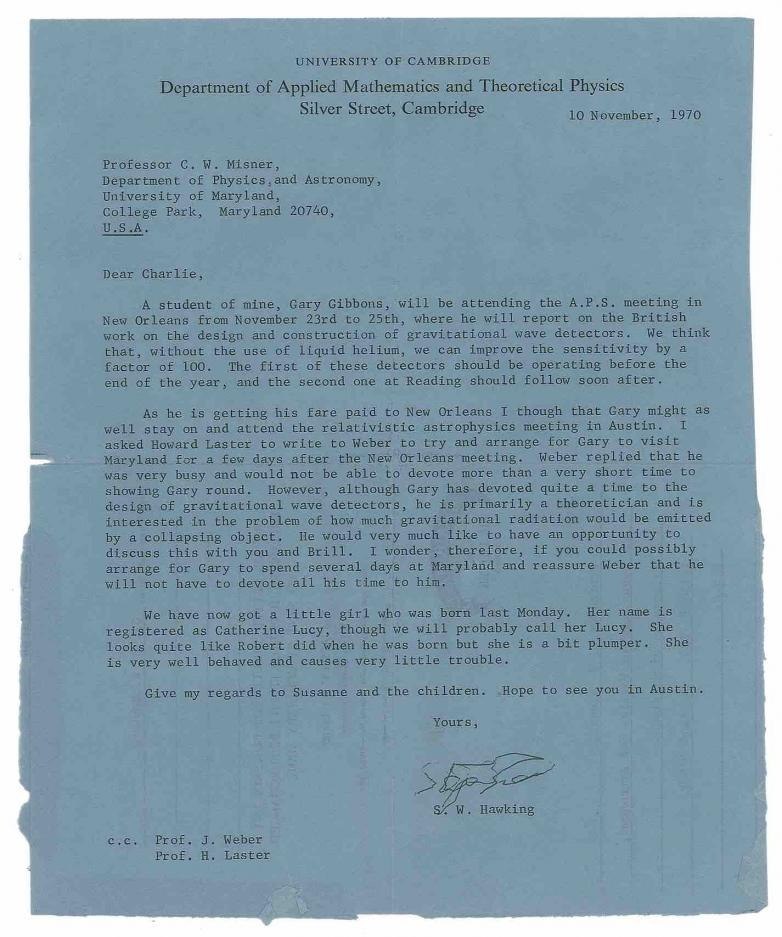 An exceedingly rare one-page typed letter written by Stephen Hawking and signed “Stephen” is headed to auction in Boston.

Boston — A Stephen Hawking signed letter on the hunt for gravitational waves and the birth of his daughter will be auctioned by Boston-based RR Auction.

The exceedingly rare one page typed letter signed “Stephen,” on University of Cambridge, Department of Applied Mathematics and Theoretical Physics letterhead, dated November 10, 1970. Letter to physicist Charles W. Misner, a professor at the University of Maryland, in full: "A student of mine, Gary Gibbons, will be attending the A.P.S. meeting in New Orleans from November 23rd to 25th, where he will report on the British work on the design and construction of gravitational wave detectors. We think that, without the use of liquid helium, we can improve the sensitivity by a factor of 100. The first of these detectors should be operating before the end of the year, and the second one at Reading should follow soon after.

As he is getting his fare paid to New Orleans I thought that Gary might as well stay on and attend the relativistic astrophysics meeting Austin. I asked Howard Laster to write to Weber to try and arrange for Gary to visit Maryland for a few days after the New Orleans meeting. Weber replied that he was very busy and would not be able to devote more than a very short time to showing Gary round. However, although Gary has devoted quite a time to the design of gravitational wave detectors, he is primarily a theoretician and is interested in the problem of how much gravitational radiation would be emitted by a collapsing object. He would very much like to have an opportunity to discuss this with you and Brill. I wonder, therefore, if you could possibly arrange for Gary to spend several days at Maryland and reassure Weber that he will not have to devote all his time to him.

We have now got a little girl who was born last Monday. Her name is registered as Catherine Lucy, though we will probably call her Lucy. She looks quite like Robert did when he was born but she is a bit plumper. She is very well behaved and causes very little trouble. Give my regards to Susanne and the children. Hope to see you in Austin." In fine condition, with some light creasing.

A remarkable letter in which Hawking writes about the hunt for gravitational waves (finally detected in 2016), asks his correspondent to aid his doctoral student Gary Gibbons (today an accomplished theoretical physicist), and announces the birth of his daughter (Catherine Lucy, who indeed goes by Lucy today).

One hundred years after Albert Einstein first predicted the existence of gravitational waves, scientists finally received proof of these disturbances in the curvature of spacetime: the ‘ringdown’ following the collision of two black holes was detected at the Advanced Laser Interferometer Gravitational-Wave Observatory (LIGO) and announced on February 11, 2016. When asked for comment, Stephen Hawking said that the discovery would ‘revolutionize’ astronomy, noting also that proved his calculations made in 1970—the same year he wrote this letter—to be correct: ‘The observed properties of this system are consistent with predictions about black holes that I made in 1970 here in Cambridge.’

He goes on to ask Dr. Misner to aid his doctoral student, Gary Gibbons, during his trip to America. Hawking and Gibbons would go on to collaborate in their research, lending their names to the ‘Gibbons-Hawking effect,’ ‘Gibbons-Hawking space,’ ‘Gibbons-Hawking ansatz,’ and ‘Gibbons-Hawking-York boundary term.’ For his contributions to General Relativity and the Quantum Theory of Gravity, Gibbons was elected a Fellow of the Royal Society in 1999.

Hawking also mentions his one-year old daughter, Lucy, his second child, who had been born on November 2, 1969. Today, she is a science educator and writer, and co-author of five cosmos-related children’s books with her famous father.

Diagnosed with early-onset motor neurone disease in 1963, Hawking’s physical capabilities deteriorated over time—his shaky hand evinced in this signature of seven years later—making authentic autographs exceedingly scarce. Confined to a wheelchair by the end of the 1970s, he opted to sign with just a thumbprint later in life. As an incredibly rare autograph from one of the towering scientific figures of the 20th century, with profound scientific and personal content, this is a truly spectacular letter.

Bonnie Parker's handwritten poem book entitled "Poetry from Life's Other Side." Thirty-two handwritten pages inside of a black leatherette bank book, stamped on the front cover, "The First National Bank, Burkburnett, Texas." Featuring a mix of Parker's original creative compositions and renditions of popular folk ballads, these poems were written by Parker while she was held in Kaufman County Jail, Texas, in 1932, after being arrested for the botched armed robbery of a hardware store with Clyde Barrow, Ralph Fults, and Raymond Hamilton; while Barrow and Hamilton managed to escape on foot, Parker and Fults were apprehended. This was Parker's first and only arrest, and she stewed in jail for about two months before being released on June 17, after the jury failed to indict her. In Emma Parker's 1934 biography of Bonnie and Clyde, she made note of several particulars of her daughter's stay in prison: that this was when she first drafted 'Suicide Sal'; that it was when Bonnie began to use hard slang and gangster jargon; and that she befriended the jailer and his wife, who would let her sit out on the lawn. With little to do other than pine for Clyde and chat with her jailer, it is no surprise that Bonnie's fertile imagination turned to poetry: of the ten poems in this book, five appear to be original compositions, largely drawn from her adventurous life on the road with the Barrow Gang.

Henry David Thoreau manuscript where Thoreau ponders the wonders of the natural world. The sought-after one-page handwritten manuscript contained within the first volume of the 1906 'manuscript edition' of Thoreau's works, apparently being his journal entry from August 24, 1854. In part: "They appeared to suffer more than any trees, except the white ash. Their leaves (and also those of the alders, hickories and grapes, and even oaks more or less) were so curled on the upper 3/4 of the trees, that their foliage had a singularly glaucous hue. Seen at a distance in rows along the river, they had somewhat of the same effect with the silvered tip of the swamp white oak. The sight suggested a strong wind constantly blowing and turning up their leaves. I went ashore & felt of them. They were more or less crisped & curled permanently. It suggested that, to a slight extent, occurs every year. On the Cliffs, so many young trees & bushes were withered, that from the river, it looked as if a fire had run over them." The sheet is professionally inlaid into a larger sheet, which was subsequently bound into the first volume of the twenty-volume set The Writings of Henry David Thoreau. Manuscript edition, limited issue, numbered 555/600. Boston and New York: Houghton Mifflin and Company, 1906. Hardcover, 6.25 x 9, 435 pages. The other volumes of the set are not included. Book condition: G+/None, with ex-library labels and markings.

The Remarkable Rarities live auction event from RR Auction will be held on Saturday, September 21 in Boston, MA at 1:30 pm ET. For more information, go to www.rrauction.com.