Handwritten Page from The Hound of the Baskervilles Sells for World Record $423,000 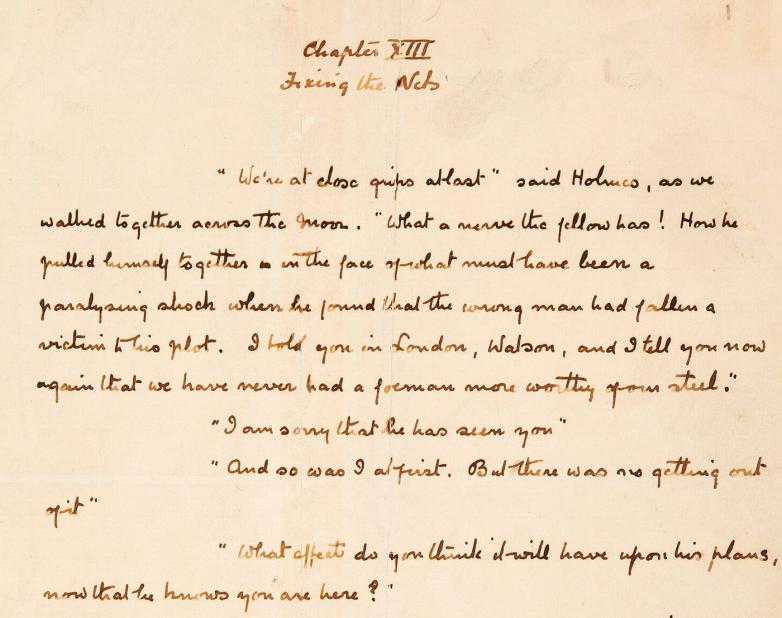 Dallas — More than 900 bidders were on the case at Heritage Auctions' Nov. 6 Historical Manuscripts Signature® Auction.

But the day's biggest mystery was solved when the final price for a handwritten page from Sir Arthur Conan Doyle's original manuscript of his beloved Sherlock Holmes book The Hound of the Baskervilles turned out to be a record-shattering $423,000.

"This extraordinary rare page from The Hound of the Baskervilles shows the strength of the manuscript market around the world as Heritage continues to source the best examples for our clients," said Joe Maddalena, Heritage Auctions Executive Vice President.

Published in 1902, The Hound of the Baskervilles is the novel in which Doyle brought back his most famous character, after killing off the fictional detective in 1894, and remains one of the most popular among Doyle's Sherlock Holmes books.

To promote Hound's release, as well as Holmes' much anticipated return, the book's publisher broke up the pages of Doyle's manuscript and offered them individually to dealers who purchased copies of the book.

"Unfortunately, the manuscript was written on paper that was popular at the time ... but also was very acidic, so it deteriorated more quickly than many other varieties," said Sandra Palomino, Heritage Auctions Historical Manuscripts Director. "Therefore, not many pages have survived, and of those, few are in this condition. We knew that the manuscript would do well, in that it mentioned Sherlock Holmes, but we were thrilled that it sold for more than twice the estimate."